I recently received two questions that ask about worshipping and/or working with deities from different cultures. Tyson Chase asked:

What are some of the complications and benefits you have experienced working with deities from different cultures?

And an anonymous questioner asked:

I get questions like these rather frequently. They’re good and relevant questions. Rather than discussing them in isolation, I think we need to approach the matter of deities from different cultures from the ground up: from theology to culture to practice.

I sometimes speak of “my Gods” – the Morrigan, Danu, Cernunnos. Others I honor and serve without a formal relationship. But I say “my Gods” in the way I speak of “my family” or “my country.” None of those persons or things belong to me. Rather, I belong to them.

I talked about polytheist theology in the last post. Gods are individual persons. They are the mightiest of spirits. They are sovereign persons with Their own agency and will. As They frequently show us first-hand, They do what They want, with whom They want, for Their own reasons.

The Gods call who They call. The racist and folkish Pagans who tell People of Color “our Gods would never call you” are placing human limitations on divine beings, and that never ends well.

At the same time, most Gods were originally connected to specific groups of people. The Gods had people. Those people encountered their Gods and they told stories about them. As always when humans talk about Gods, those stories said as much about the people who told them as they did about the Gods they encountered. To fully understand those stories, we must understand the people who told them.

And that brings us to the matter of culture.

Where does religion end and culture begin? That can be hard to say, particularly for those of us who understand that religion isn’t just about what you believe (an idea unique to Protestant Christianity) but about what you do and who you are.

Religion – from the Latin religare, meaning to bind together – is the sacred things a group of people have in common. It’s what brings us together and keeps us together.

A religion is in part a set of protocols and technologies for maintaining relationships between a group of people and their Gods. When we look at how people traditionally interact with their Gods (again, “their” meaning they belong to those Gods, not that those Gods belong to them) we need to determine what parts of those protocols are technology (generic techniques and methods) and what parts are culture (identity markers of a group of people).

Let me be blunt: I’m done arguing about cultural appropriation. It’s real, it’s bad, and we shouldn’t do it. But too much of the current discourse around cultural appropriation is done by white people using it as a blunt instrument in ways never requested by indigenous and/or oppressed people, for the purpose of making themselves feel superior, and with the result of creating cultural silos that would make any white supremacist proud.

I am far more concerned with cultural authenticity: don’t pretend to be something you aren’t.

Is a religious practice a technical protocol for approaching a deity, or is it just the way a particular group of people in a particular place and time approached that deity? If it’s the first, following that protocol is probably necessary. If it’s the second, doing it your own way is probably better.

Mainly, do what you do respectfully and authentically.

The Gods want what They want

Our Gods are not jealous Gods. For the most part, They don’t care if we worship, work with, or work for other deities – so long as They get what They want.

That means we rarely are able to synthesize our worship. To use an electrical metaphor, it’s something we do in series, not in parallel: one and then the other, not all at the same time.

They’re not all on the same team

A plain reading of the stories our ancestors told about their Gods makes it clear that some Gods don’t get along with others. Some Gods are associated with cultures that are very different (i.e. – East Asian deities and Northern European deities). Trying to worship Them together is incongruous, at the least.

You may need to set up separate shrines and altars. You will probably need to worship Them on different days – you will certainly need to observe each One’s high days separately. Give each one what They want.

But some of Them are working together

The questioner’s comment about the Morrigan leading them to deities from different cultures is not uncommon. I haven’t heard stories of the Morrigan and Odin “horse-trading” devotees in a while, but I think that’s more because the spaces for those kinds of conversations aren’t nearly as common as they were in the mid-2010s.

Still, the first-hand experiences of many contemporary polytheists confirm that this sort of cooperation and coordination happens with some regularity. If the Morrigan or some other deity points us in the direction of other deities, we can safely assume there’s a good reason for it.

This phenomenon reminds us that we are practicing a living religion. The lore of our ancestors is a treasure, but modern Pagan polytheism is grounded in our own contemporary experiences of our Gods. They can speak to us just as They spoke to our ancestors – and they do.

And sometimes what They tell us involves working with Someone totally unexpected.

Proceed with respect, with dedication, and with love

As with so much else when it comes to our relations with our Gods, the specifics often get complicated but the basics are simple.

Whether you’re called to a particular deity or if you pursue Them, begin with respect. Listen closely, assume nothing, and remember that you’re dealing with persons who are far more than we are. Show Them the dignity and honor They deserve.

For most of us, most of the time, They don’t ask a lot. Some prayers, some meditation, some offerings. The occasional hands-on assignment that helps promote Their virtues and values in this world. What They ask, we should give. Unless we can’t, in which case it’s up to us to explain why and to offer what we can in its place. Mainly, we need the dedication to do what we say we’ll do.

Many of us like to emphasize the power and might of our Gods, and the seriousness of our service to Them. That’s a good and necessary thing. But both the stories of our ancestors and our own experience demonstrate that our Gods love us. Working from a place of love is a very good thing.

When we do what we do with respect, dedication, and love, we are likely to be on the right path. 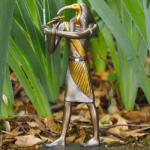 September 15, 2022
Polytheist Theology: the Names, Functions, and Relationships of the Gods
Next Post