Can the Christian and Muslim Both Be Right?

Can the Christian and Muslim Both Be Right? February 19, 2010 John Shore 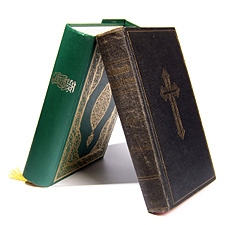 In yesterday’s Religious Tolerance: Lack of Conviction, or World’s Only Hope? I asserted that ultimately the only hope for mankind is if everyone who fervently believes in their religion “adheres to their belief the idea that just because something is right for them doesn’t mean it must be right for everyone else.”

This idea—that the Christian must admit that the Muslim is every bit as happy and spiritually fulfilled in his faith as he is in his (and visa-versa)—is typically anathema to both the Christian and the Muslim.

To both, there is only one true God. To both, anyone who believes in any God but their God is tragically deluded, and destined for an eternity in hell.

“Jesus is the way, the truth, and the life!” cries the Christian.

“No God but Allah!” cries the Muslim.

And between the two, history cries.

A commenter on yesterday’s post wrote, “It seems to me it is impossible for both the Muslim and Christian to be correct.” A child could see that’s true. And so the adult must admit that if some way isn’t found for that not to remain true—if people of faith persist in believing that people of different faiths are wrong, and so in dire need of correction—then nothing will change, and the history of humanity will remain its future.

Except we don’t fight the way we used to, with sticks and rocks. We’re so much better at killing now.

We have a choice. Either religious people find, within the tenets of their religion, every last reason to have true, deep, and lasting respect for the religion of others, or those of us who are religious acknowledge that our failure to do so guarantees that eventually the whole race of us will probably kill each other off (insofar as people fight over nothing with the fury they do religion). This isn’t a value judgment; and it’s certainly not a compromise of my own deeply-held Christian faith. It’s simply a fact. We either get all the way okay with people believing other than we do, or we all (out of, insanely, our love for the eternal well-being of those who believe differently from us) perish.

One world, or no world. That’s pretty much our choice. Didn’t used to be, because we didn’t used to kill as efficiently as we do now.

See Iran building its bomb. See us at war in the Middle East.

See the future of all mankind, written on the wall in crimson red.

In the search for how we can truly be at peace with others not being Christian, we Christians might begin with the commandment Christ himself called the greatest, most comprehensive law of all: “Love your neighbor as you love yourself.”

February 18, 2010
Religious Tolerance: Lack of Conviction, or World's Only Hope?
Next Post

February 20, 2010 My Interview with Writer's Digest
Recent Comments
30 Comments | Leave a Comment
Browse Our Archives
get the latest from
John Shore
Sign up for our newsletter
POPULAR AT PATHEOS Progressive Christian
1

Truth or Trump: Christians Must Decide...
EcoPreacher
Books by This Author Books by John Shore