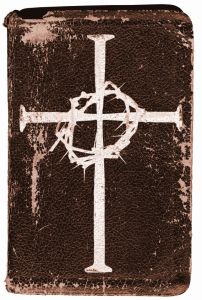 The Christian doctrine of atonement amounts to this dynamic: People sin. They can’t help it. They always have; they always will. It’s simply in people’s nature to sin. (For more, see my “Born Into Sin” Just Means Born, Period.)

Having it be the nature of every human being to not only sin, but to in fact be defined by their sinful nature, ends up creating for each and every one of us, and definitely for the human race as a whole, a great, big, vast amount of Bad Karma.

And just like we would with any awful, caustic, terribly bad thing, we would all really, really like every last bit of bad karma in the world to utterly, completely, and forever disappear.

On our own, we are very firmly and irrevocably stuck with the cumulative karma of ours and everybody else’s sin.

And what is the effect of all this bad karma that we have each inherited and continue to create for ourselves and others?

The Bible has that answer in six words: “The consequence of sin is death” (Romans 6:23). And not a one of us needs the Bible to tell us that, either. We all know about the “wages” of cumulative sin (and all sin is cumulative). We understand that ultimately sin leads to the undermining and destruction of everything we naturally hold dear. We know that sin begets pain, shame, the perpetration of evil, and the guilt that eats away at us like acid we swallowed. We know it leads to the degradation of our race, the despair of our children, shame about the past, confusion about the present, and hopelessness about the future.

We know that sin drives a wedge between us and everything holy and divine. We know that it separates us from God.

The cost of sin is just plain bad.

It needs to go!

And that, brothers and sisters, is where Jesus comes in.

Specifically, it’s where Jesus willfully allows himself to be slaughtered—to be, as you’ve no doubt heard it put before, sacrificed—as a very specific, blessedly deliberate act of atonement for our sins.

Christ died for our sins. With his body, Christ paid the final price for everything bad we or anyone else would ever do. That’s where that phrase comes from about we believers being “washed clean by the blood of Christ.” Yes, that phrase is startling visceral. But it captures the reality upon which Christianity is founded. Understanding and believing that Christ died for our sins is what Christianity is.

Christ’s atonement allows Christians to have their sins utterly and completely forgiven.

You know that guilt you feel when, by your very nature, you add to the Bad Karma Pile that you just know is forever accumulating everywhere around and in you?

Confess your sins to God, and voila: you feel that bad karma lifting off you like a heavy cloak coming off your back.

Because Christ, through his infinite love and compassion, used his body as ransom to secure for all eternity the absolute atonement of your sins, you, as a believer in Christ, get to die without the rancid stink of sin anywhere near you.

You will, in other words, die perfect.

And it’s dying as clean as the Lord himself that upon your death will render you suitable to not only come into his blessed presence, but to spend the rest of eternity there.

It is Jesus’ 100%, iron-clad promise to you that if you believe in what he did for you on the cross, that is what’s going to happen to you.

Here’s some scriptural support for the above:

Mark 10:45  For even the Son of Man did not come to be served, but to serve, and to give his life as a ransom for many.

1 John 4:10  This is love: not that we loved God, but that he loved us and sent his Son as an atoning sacrifice for our sins.

Romans 8:32  He who did not spare his own Son, but gave him up for us all—how will he not also, along with him, graciously give us all things?

1 Corinthians 15:3  For what I received I passed on to you as of first importance: that Christ died for our sins according to the Scriptures.

1 John: 2  He is the atoning sacrifice for our sins, and not only for ours but also for the sins of the whole world

Romans 3:25  God presented him as a sacrifice of atonement, through faith in his blood. He did this to demonstrate his justice, because in his forbearance he had left the sins committed beforehand unpunished—

Matthew 26:28  “This is my blood of the covenant, which is poured out for many for the forgiveness of sins.”

John 3:16  For God so loved the world that he gave his one and only Son, that whoever believes in him shall not perish but have eternal life.

February 25, 2010 Christian Teens and Gay Teens: It's in the Cards
Recent Comments
17 Comments | Leave a Comment
"You know less 👏🏻"
Shemara Lakin When biblical “laws” no longer apply
"This clown relies on fooling others who know less then she does."
Hollybell MN When biblical “laws” no longer apply
"Right away you state atheists refuse to listen. I'll bet you don't listen either. Did ..."
JamieHaman Why atheists win arguments with Christians ..."
"Oh wow, so you did get in? Did you do all 9 months and graduate, ..."
Peter J. Markavage The Bible and sex addiction
Browse Our Archives
get the latest from
John Shore
Sign up for our newsletter
POPULAR AT PATHEOS Progressive Christian
1