Good Art Is All About the Crazy 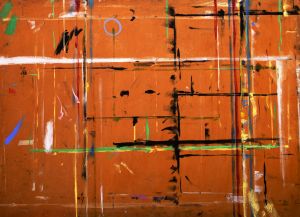 I’m in a hurry just now, but I wanted to throw this out there real quick, and then see what you guys might have said about it once I return from my trip to Trader Joe’s and the post office and getting lost for at least fifteen minutes because I’m not actually sure where the post office is.

I’m going to speak tonight at/to/in front of a group of Christian artists. So I was thinking about what I might say. And (as some of you who’ve recently visited my FB fan page might already know), part of what I came up with was this:

The religious artist seeking to create great art must begin by disregarding his every concern for propriety.

I’m sure that in my life I’ve never given as much thought to any one topic as I have the relationship between art and God — which is to say, really, about the relationship between man and God, which I think is basically all anyone, in one way or another, is ever thinking about anyway. And one of the Big Things I think about the whole Art-God phenomenon is that a person seeking to create great art cannot let anything get between them and whatever artistic imperative is gnawing at their insides. And one of the things that I think tends to most often interfere with the production of truly fulfilling and aesthetically arresting art is the assumption (however subconsciously or subtly it presents itself) that the end product must in some very real and important way be okay with God.

I know Christian artists often go into their work believing that whatever they produce must arrive essentially pre-approved by God. Like it’s a given that whatever they ultimately create must come bearing a big “God-Approved!” stamp.

And then, in the making of that art, they choke. They either come up with something too soft and … pablumy, or they get nothing at all. But it doesn’t work out; at best, the end up with the equivalent of motel art.

And you know why that is, I think?

Because art is about the human crazy.

And giving that form and expression isn’t really God’s thing.

And it’s vaguely possible that you won’t be entirely repelled by my post, My Answer to Christians Denouncing R. Crumb’s “Genesis Illustrated.”

May 19, 2010 "What's Wrong With Dressing Sexy?"
Recent Comments
29 Comments | Leave a Comment
Browse Our Archives
get the latest from
John Shore
Sign up for our newsletter
POPULAR AT PATHEOS Progressive Christian
1