The Joy of Hell 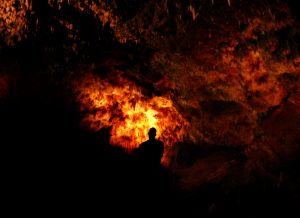 Taking the concept of hell out of Christianity is like taking the brandy out of eggnog. What remains is still deliciously substantive and satisfying—but it lacks that zingy, burning undertone, that certain dangerous something that tends to make people a little crazy.

Not that we Christians think of hell as “fun.” Certainly not in the afterlife, anyway. But here in this life, it’d be disingenuous of us not to admit the degree to which hell provides us with the justification for being just about as rude, self-righteous, and judgmental as we’re inclined to be. Which, let’s face it, is kind of a fun way to be.

Without rudeness, self-righteousness, and being judgmental, we’d have no gossip. There’d be no magazines, no soap operas, no talk shows. No reality shows!

Basically, our culture would crumble.

Our acceptance of the reality of hell means that we Christians get to—that we have to, really—tell everyone who is not a Christian how mind-bogglingly wrong they are about pretty much everything that’s most critical in life. (If a person is wrong about something as large as God, there’s just not a lot left for them to be right about, is there?) It fully empowers us to tell complete strangers how much better and righteous their lives would be, if only they’d wake up and start thinking and believing exactly what we think and believe. Hell gives us permission to tell people how, if they were just like us, they’d be saved.

Is that kind of invasive, sweeping presumption appallingly rude? Sure it is. Unless you’re a Christian. For Christians, telling people that they urgently need to become someone radically different than they are is the opposite of rude, see? When a Christian tells someone that, they’re being loving.

And for that we have hell to thank. Without hell, after all, there’d be nothing to save anyone from.

Without hell, the only thing we would have to recommend Christianity would be the love of Jesus. The story of God’s atoning sacrifice on the cross would have to suffice. We would be able to point upward to the love of Christ—but never downward, to his wrath.

Without hell, Christianity would be all about this life—how to live, how to love, how to more thoroughly integrate our mind and lives with God. Then caring for others would be virtually everything to the Christian. Concerning himself not a whit about the next life would free the Christian to concern himself solely with this one.

Not forcing Christianity upon others, and no sense that God accepts only Christians into heaven. That is what we would have if we didn’t have hell.

Thank God the concept of hell can in no way be challenged or undermined by reconsidering our interpretations of its biblical references, or by wondering what possible vested interest anyone who’s ever had any power in Christianity might have in promulgating the ideas about it that we’ve come to accept as unquestionably true.

If we started down the road of questioning the validity of hell, who knows what kind of world we might end up with?

October 19, 2010 Sarah Palin, the Truth Called. It Wants Its Books Back.
Recent Comments
90 Comments | Leave a Comment
Browse Our Archives
get the latest from
John Shore
Sign up for our newsletter
POPULAR AT PATHEOS Progressive Christian
1

A 'biblically based process to mitigate...
slacktivist
Books by This Author Books by John Shore