From Hell to Crazy Town 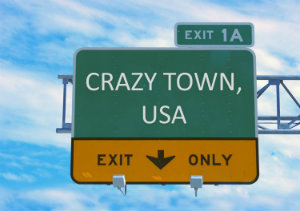 I recently gave a talk to this group, who asked me to address the question, “Is hell real?”

In all of the world, it’s hard to imagine any question easier to answer. Watch:

We can think we know if hell exists; we can hope, trust, and believe that we know. About hell we can guess, assume, surmise, deduce, and speculate. But until someone returns from The Great Beyond with a video recording—or WikiLeaks gets really good at what it does— actual knowledge of whether or not hell is real will continue to be denied us.

We don’t know what happens to us after we die, and we don’t know what (if anything) was happening with us before we were born. We exist in a continuum of consciousness bookended, at either end, by absolute blanks.

This fundamental not-knowing is fundamentally not good for us. We like/crave certainty—especially about anything as organically vital to us as what happens after we die.

And what do we do in the face of our forced ignorance on that subject? We do what we’re designed to do. We keep fighting. We keep struggling. We keep searching for certainty.

And for a lot of us—and certainly for Christians—that means turning to God.

And when, through prayer and communion with the Holy Spirit within them, Christians ask God what will happen to them after they die, what does God reveal to them? Nothing whatsoever. He remains utterly silent. God never answers that question for anyone. No monk, seer, prophet, holy man, guru, shaman or priest, anywhere in the world, has ever known one whit more about what really happens to people after they die than a biscuit does.

So where next do Christians turn in their quest to solve the problem of the afterlife? To the Bible, of course.

And what does the Bible say about what exactly happens to us after we die? Not nearly enough, mainly: it’s like a piece of Swiss cheese that’s mostly holes: there’s just not much substance there. And safe to say that what is in the Bible about life after death lends itself to myriad interpretations.

Again: not so much with the definitively helpful.

So over the centuries Christians did the only thing left them, which is decide what the Bible says about what happens to people after they die.

Upon dying everyone goes to either heaven or hell. If in this life you’ve been good, then upon passing you catch the up elevator; if you’ve been bad, then afterwards it’s all downhill for you.

And such a paradigm for the afterlife, grounded as it is in basic reward and retribution, makes sense to us. It feels right. Ultimately the good are rewarded, and the evil are punished. That works for us. Fair is fair.

But to this naturally palatable mix Christians then added an ingredient which, if you are not a Christian, sours the whole thing right up.

If you want to make it into heaven, decreed the Christians, then you must be a Christian. In fact, they decided, the only thing required to qualify as a denizen of heaven is to be a Christian.

With that, Christians were constrained to confess that the Muslim baby who dies is sent directly to hell.

That the loving atheist goes to hell.

That the Jewish philanthropist goes to hell.

Ninety-five percent of the people who have ever lived? Now suffering in hell.

And suddenly Christians found themselves in possession of what can only be described as a profound public relations problem.

How can such a system appear to be grounded in anything but a moral travesty?

Put simply, it can’t. Right is right; wrong is wrong; unfair is unfair. It is a gross and manifest injustice for God to eternally punish a person for no offense greater than dying while not a Christian. That fact is inescapable.

And yet Christians must try to escape it, of course. No one wants to be playing for team Unjustly Cruel.

And just how do Christians attempt to defend a demonstrably indefensible God? By literally the only means available to them: by claiming that God’s sense of justice is simply beyond the human capacity for understanding.

“Sure, to us it seems cruel and unfair to send all non-Christians to hell,” is the standard Christian defense. “But we’re not God. God’s ways must remain a mystery to us. God’s sense of justice is not our own.”

What God means by the word justice, in other words, is unrelated—in fact seems completely opposite—of what we humans mean by that word. And if that is true, then shouldn’t we straight away empty all of our jails and prisons, and throw away all of our law books? Because isn’t it obvious that we comprehend virtually nothing of the true meaning of right and wrong?

And what about the whole idea of us being made in God’s image? How can we be, when we obviously don’t have anything like his mind or heart?

And when in the Bible God, as Jesus, speaks as he does of peace, honor, righteousness, compassion, loyalty, dignity, truth, and love, what are we to make of those words? On what grounds should we assume that God means by those words anything like what we do?

And then you stop the car, and you get out, and you realize you’re in Crazy Town.

I’m a Christian, and I want out of Crazy Town. I hate Crazy Town. The water tastes awful; the plumbing never works; everyone goes on red and stops on green. People cry at baby showers, and laugh at funerals.

I say let’s take the next exit out of Crazy Town, and get ourselves back on the main road.

Anybody with me on that?

If so, we’ll continue on this trip next time.

May 17, 2012 The truth isn't liberal or conservative
Recent Comments
97 Comments | Leave a Comment
"FOR THE READER'S BENEFIT & EDIFICATION:To see https://www.monergism.com/topics/hell The Biblical information therein refutes the cultists ..."
Thomas Dickensheets Proof that believing in hell is ..."
"you quote from an apocryphal story which is not part of God's Word inserted into ..."
Gum Boocho Waiting for Bob Jones’s huge gay ..."
"The story you refer to, at the start of John 8, is not a part ..."
Gum Boocho Waiting for Bob Jones’s huge gay ..."
"There is a huge point to the prodigal son story that Jesus told that is ..."
Jesse Baker Dude: Being a Christian doesn’t mean ..."
Browse Our Archives
get the latest updates from
John Shore
and the Patheos
Progressive Christian
Channel
POPULAR AT PATHEOS Progressive Christian
1