Christians and LGBT Equality: There Is No Middle Ground 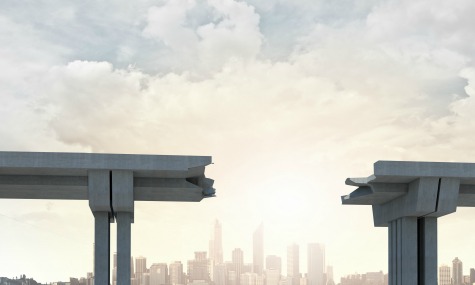 (This post first appeared on my blog at JohnShore.com, where it was shared 10,200 times.)

In response to my post Being gay is no sin.” See how easy that is, Andrew Marin? folks have made the point that Andrew’s work is valuable, because he is “building bridges”—because he is, as one reader put it, “creating stepping stones from one end of the spectrum to the other.” They appreciate Marin establishing a neutral, non-judgmental, values-free middle ground where parties on either side of the gay-Christian debate can meet to together discuss and explore the issue.

And I certainly understand how great that sounds.

But it’s not great. It doesn’t even make sense. Because when it comes to the issue of LGBT equality, there is no middle ground. There can’t be. The Christian/LGBT issue is a moral issue. And moral issues are by definition about right and wrong.

And this particular moral issue is one of no small consequence. There couldn’t be more at stake with it. The Christians on one side of this debate are claiming that, in the eyes of God, those on the other side are less than human.

No matter how strenuously he or she might deny it, any Christian who fails to forthrightly and unambiguously assert that there is nothing whatsoever inherently immoral about same-sex relationships has chosen a side in this conflict. They’ve chosen to perpetuate the maligning, ostracizing, and degradation of gay people by Christians. If you don’t stop one person from abusing another, of what good are you to the victim? To a starving man, the person who can’t decide whether or not they want to share their food is no better than the person who outright refuses to.

I’m all for conversations that are about exploring critical moral issues. And of course I in every last way encourage people on opposite sides of this issue to reach out to one another; I must spend a fourth of my life carefully and thoughtfully engaging with Christians whose theology on homosexuality is radically different from mine. But in order for such conversations to be of any genuine value, they must be intentional. They must explicitly have resolution as their purpose. A bridge that goes nowhere, or stepping stones that quickly circle back to their starting point, are useless.

When it comes to weighty moral issues, there’s nothing wrong with traveling across the middle ground. But it’s at best folly and at worse a harmful lie to maintain that it’s morally feasible to remain in that middle ground. No one wanders the desert forever.

It’s true that on the issue of LGBT and Christian relations I am impatient. But I’m impatient for a good reason. Christian leaders on the right do not hesitate to loudly and boldly claim their moral certitude. From the left-hand channel of that stereo, though, we too rarely hear anything but silence, or the static that almost sounds like music, but isn’t. It’s time for the left to dial in the station, hit the button from “mono” to “stereo,” turn up the volume, and start broadcasting the message that it’s perfectly okay to be gay.

Christian leaders who persist in doing nothing more than “elevating the conversation” succeed in doing nothing more than alleviating the pangs of conscience that Christians on the right should be encouraged to feel for clinging to their convictions that same-sex relationships are an abomination to God. Instead of evading their moral responsibility, “progressive” Christians need to once and for all, forthrightly and unequivocally, proclaim their full and unconditional acceptance of same-sex relationships. They need to do that for the sake of gay people, and for the sake of the millions who have lost their faith in God because they cannot reconcile the gross disparity between a clear moral precept and the only thing they ever hear Christian leaders actually say.

June 13, 2012 It's not about the gay issue; it's about restoring our devastated mountaintop
Recent Comments
0 | Leave a Comment
"I am interested in why we believe that we can measure that which is by ..."
Gary Kennedy Why atheists win arguments with Christians ..."
"Tell him there is a bigger world out there and many churches now accept LGBTQ+ ..."
John Sweet Pastor calls his Christian teenage son ..."
"Je ne suis pas vraiment un lecteur Internet pour être honnête mais vos blogs vraiment ..."
에볼루션카지노 Thanksgiving 2012 Share a Prayer
"FOR THE READER'S BENEFIT & EDIFICATION:To see https://www.monergism.com/topics/hell The Biblical information therein refutes the cultists ..."
Thomas Dickensheets Proof that believing in hell is ..."
Browse Our Archives
Related posts from John Shore