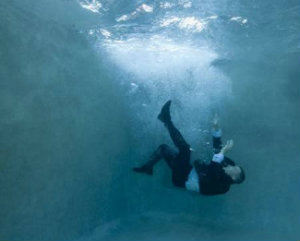 Alan Chambers of Exodus International (the flagship “pray-away-the-gay” organization) has just published “Defining Exodus – Letter from Alan Chambers for June 2012,” wherein he attempts to make Exodus seem less retro-insane than most people now understand it to be. Alan’s letter is below. Inserted within it, in bracingly beautiful blue, are my comments on that letter. (The bold parts of Alan’s letter appear that way in the original: they’re his bolds, in other words, not mine.)

Exodus International is repeatedly accused of seeking to make gay people straight through conversion therapy and prayer. As the media and culture rage around us, drawing battle lines in the sand and seeking to fuel the debate about homosexuality. [So … that last sentence is incomplete. But its point is clear enough: people like myself, who oppose the toxic, life-destroying idea that God condemns same-sex relationships, don’t have a critical moral point we’re trying to make, or anything like that. We’re just “raging”: we’re doing nothing more than seeking, for our own gain, to “fuel the debate.” It’s the ol’ tactic of denigrating someone by ascribing to them a false motivation. Deft ploy, Alan! For a fourth-grader.]

You know, my team and I have been working diligently to clearly state the calling of this great ministry and focus solely on that work. We want to reiterate that our mission is, first and foremost, to serve, support and equip the Church in providing refuge to individuals or families impacted by same-sex attractions (SSA). [And with the word refuge, Chambers officially steps onto the tightrope on which it’s clear he’s now about to start tap-dancing.]

Quite simply, our goal is to make the Church famous for loving and serving people as Jesus would and pointing them to Him. [Tippity-tap, tappity-tip. But more to the point(s): is a big problem for the church that it’s not famous enough? What a weird thing to say. Much less weird—and certainly a good deal more problematic—is Chambers’s casual, almost sublimely arrogant assertion that Exodus’s attitude toward gay people is indistinguishable from Jesus’.]

I realize this may not be new info for some of you.  Yet, I believe it is important for everyone to hear this from me, as “all sides” are seeking to define Exodus and quite frankly, no one is doing a great job. [Didn’t Alan just say, “My team and I have been working diligently to clearly state the calling of this great ministry”? I guess by, “No one is doing a great job of defining Exodus,” he means himself and the people he works with. Bummer for him. But, gosh, I wonder if the main reason everyone continues to be unable to understand what exactly it is that Exodus does or believes could have anything to do with how fundamentally logically untenable it is to say, “We love gay people—but being gay is a moral abomination deserving God’s condemnation and wrath.”? Nah. It must be that everyone’s just stupid.]

It’s time we set the record straight.  Pun intended. [Well, you know what they say: spend enough of your life inside a closet, and you forget what’s funny.]

While my office seeks to serve the Church, the 260 churches, ministries and counselors here in North America and our alliance of partner ministries across the world are there to serve individuals who freely come to them for support.  People seeking this encouragement and guidance do so because they have decided to pursue an identity or life based on their relationship with Christ over their same-sex attractions. [Just so we’re clear: the second half of the bolded sentence asserts that being gay is incompatible with being in a relationship with Christ. The difference between the way Chambers here says that, and “God Hates Fags,” is the difference between a pig and a pig wearing a graduation cap.]

In most cases these are Christian men and women who desire to live in accordance to God’s design for sexuality, clearly defined in scripture. [Wow. There it is. Take note, anyone who might still believe that Exodus is anything but another version of the American Family Association, the National Organization for Marriage, or any other “Christian” organization whose determined and unholy end is a world in which no gay people exist.]

We believe that in Christ we have been given completely new hearts and the ability to have power over the sin that remains confined to our earthly flesh.  [I’m done. This strained exercise in P.R. is just too pathetic to warrant further comment. Exodus still believes what it always has, which is that it’s not only possible but highly desirous for gay people to, in one way or another, stop being gay. It’s just too medieval to take seriously. It’s time for Exodus to exit. They’re a joke (albeit one that isn’t in the least funny). Back when the right was getting some real traction out of the idea that one could pray away the gay, Exodus/Chambers had some power. Now that the idea that gay people can stop being gay has gone the way of the whalebone corset and dodo bird, Exodus is simply trying to keep itself alive. And, clearly, they’re doing so by stubbornly clinging to the cracked, bent, barely floating life-preserver on which one can still make out the faded slogan of its manufacturer, GOD HATES FAGS, INC.]