Dear John: Will she be scared straight? 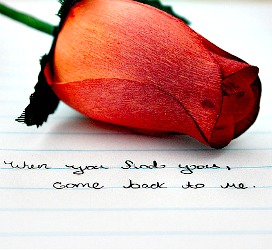 Yesterday I received from a young woman this letter:

My girlfriend and I have been together for a year and a half now. She is actually the one who pursued me. She’s been my best friend, and we have had our ups and downs, but she says that I have her heart.

She is Hispanic, so any lesbian or gay act or relationship is shunned. She is also very religious, but came to the conclusion that God loves her for her.

About a week ago, though, she said she couldn’t be with me anymore, because she wanted to follow the Bible. I know for a fact that this is coming from a friend of hers who is constantly in her ear, telling her that she is going to hell for being with me.

I still see her at church, and I have (as bad as it sounds) begged for her back. Now we talked yesterday, and she just sounds scared. She’s come out to almost all of her friends, but her parents and most of her church don’t know about who she really is, so she said she’s tired of hiding. She told me how her family and church would shun her if they knew about her. But she continues to tell me how much she wants to be with me, and how in love with me she is. She even cried on my shoulder as she said it.

So I mean I am really at a loss here. I’m hoping that if I pull away and give her space and time she’ll come back to me, because she has done this before, and she came back.

Oh, this is so difficult.

I cannot imagine what I could tell you that you don’t already know. Your friend is scared and confused. How could she be anything else, when her family, her church, the very culture in which she was raised and lives, and at least one of her friends are constantly telling her that who she is and how she loves is an affront to God for which she is bound to be punished by an eternity spent writhing in mortal agony?

For all of her life, the poor girl has been trained to believe that she is her own worst enemy. It’s hardly a surprise that for so many LGBT people—especially amongst the young, who of course are always so much more vulnerable—the intense, relentless, unceasing pressure to self-negate finally leads them to commit suicide. I believe—and am certainly hopeful—that it won’t come to that for your friend. She has, after all, you. And thank God she does.

Do for your friend all that ultimately any of us can do for those whom we love: be there. When she wants to talk, talk. When she wants to cry, lend her both your shoulders. When she wants to rejoice, let loose your hurrahs. And if ever she feels that she needs to back away from you—to in any way spend some time trying to prove to herself that she’s not gay—let her do that, too. As you know, part of being gay is going through all kinds of periods where you hope upon hope, and try to convince yourself, that you’re not gay.

Which of course you’re desperate to believe—you know: so that your family, your friends, and God won’t think you a despicable animal.

Man, there is nothing more touching than a person trying to make themselves worthy of God’s love, and nothing more tragic than such a person believing that their only hope for achieving that worthiness is to cease being the very person whom God created them to be.

You had the right idea there at the end of your letter: your best bet for having your troubled friend return to you is to give her all of the time and space that she needs. If she doesn’t come back to you as your lover, she’ll likely return, and stay, as something arguably even better: your friend.

Here’s hoping that whatever happens, and to wherever or whomever she goes, she returns, first, foremost, and forever, to her God-loving, loved-by-God self.

P.S. You said that when it comes to her sexuality, your friend wants to follow the Bible. In this essay I prove (which I know is a strong word, but … there it is) that not only does the Bible not condemn homosexuality, it condemns Christians who do. Please encourage her to read that essay. Likewise encourage her to read the book from which it is excerpted, UNFAIR: Christians and the LGBT Question. Over half of UNFAIR comprises letters written to me by gay Christians telling of their life-long struggles, tragedies, and amazing personal victories; their stories are, I know, so much like your friend’s that they are bound to bring her comfort and inspiration—as, I hope, would those essays of mine which follow the letters. I did this book very specifically for people like your friend and her family.

June 26, 2013 A spontaneous prayer about the DOMA ruling
Recent Comments
12 Comments | Leave a Comment
Browse Our Archives
get the latest from
John Shore
Sign up for our newsletter
POPULAR AT PATHEOS Progressive Christian
1