It’s his choice: His mother or his fiancee 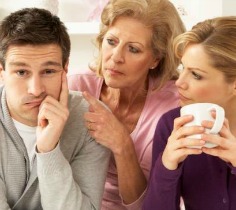 Got this in yesterday:

May I first of all just say how much I appreciate and love your page? For me, it is smothered by the teachings of grace and upholding the real meaning of God’s love, as opposed to this hateful portrayal that so many Christians are putting forward every day.

I would like to write to you about an issue that I am having with my partner’s parents. My partner and I, who are both in our early thirties, have only just moved in together. We are extremely happy, in love, and have plans to get married.

His parents are homophobic extremists and very strong Christians. He has not told them that we are living together, because he knows that she would try to make us repent for being so unholy. (She has already cried and asked that we both repent, because she knows that he has stayed over.)

My brother is gay and happily living with his partner, to whom he recently proposed. My partner has warned me that his mother will most likely either pull me aside or email me in regards to my “sinful” brother, and will push the idea that my brother needs to repent. She even said to my partner, “Don’t you feel awkward around them [meaning my brother and his partner]?”

I’m extremely supportive of my brother and gay rights, and if she were to contact me I’m concerned that I’ll say something that will potentially cause a lot of damage in my relationship with her. (I wouldn’t say anything too awful, but only the truth of what’s on my heart.) Also, I’m already feeling the effects of being bullied by her; she recently described me as a “backslider.”

I don’t define myself as a Christian any longer. But I have a close personal relationship with God that is no one else’s business.

I guess my question is, how do I deal with this feeling of violation and anger/anxiety of knowing that any day now she is going to discuss my brother’s immoral sinful behaviour with me? How do I not let this play on my mind and hurt me? How do I be the bigger person?

First, thanks for the kind words about my work. I really appreciate it.

So, to my mind, your problem isn’t with your would-be mother-in-law. Your problem is that you’ve got a partner who’s over thirty and so afraid of his mother that he’d rather lie to her than tell her the truth about the love he has for you. It’s that instead of warning his mother not to insult your brother to your face, he only warns you that she is certain to do that. Your problem is that (as I’m going to guess) he hasn’t insisted that his mother apologize to you for insulting you.

That’s a problem you need to discuss with your fiancé ASAP. He needs to understand that you expect him to be loyal to you, to defend you against anyone who insults or hurts you, including his mother. Too many men, when caught between their wives and their intrusive, inappropriate mothers, shrug their arms and say to them, “But gosh, what can I do? I love you both.”

Screw that noise. He’s yours, not hers. Get him to understand that, and to act accordingly. If he can’t do that—if he can’t actually and truly change his core understanding of what his relationship with his mother is and needs to be—then … well, then either think very hard about whether or not he’s really the right guy for you, or start practicing the heck out of your fake smile and phony compliments, because you’re going to be employing both for a very long time to come.

If his mother says “Jump!” and your spouse asks “How high?”, it’s time for a talk with your big little guy. [Tweet this.]

June 20, 2013 An open letter to Exodus International's super-remorseful Alan Chambers
Recent Comments
86 Comments | Leave a Comment
"Y'all are nuts and I'm a Christian! Call evil out and yall are evil. Monte ..."
Lesa Jackson How I Blog (and Why I’m ..."
"abusers are master manipulators."
Brandon Roberts That lovable man who abuses you
"Triggered? No. Confused?... Yes. At the amount of assumptions you seem to be making stemming ..."
Isaac A Christianity to make Satan proud
"Can I elaborate? Absolutely. I could write books and books on the subject. However, I ..."
Liora Hess A Christianity to make Satan proud
Browse Our Archives
get the latest from
John Shore
Sign up for our newsletter
POPULAR AT PATHEOS Progressive Christian
1