When biblical “laws” no longer apply 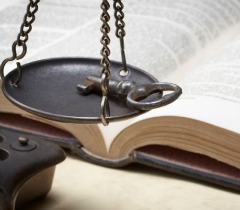 The pro-gay argument to this (which I use myself in Taking God at His Word: The Bible and Homosexuality) is, “But Christians today blithely ignore all the other Levitical laws, such as ‘Don’t eat shellfish,’ ‘Don’t wear mixed fabrics,’ ‘Kill adulterers,’ and so on. And the whole point of Jesus was to establish a new order; that’s why it’s called The New Testament. Paul himself was very clear about saying that following Jesus meant no longer following the Laws of Moses. For these reasons using Leviticus to condemn gay people is unsupportable.”

The anti-gay argument to this? “Hold on. Jesus was willing to let go of things like eating shellfish and wearing mixed fabrics, because those are ceremonial laws. But other Old Testament laws, such as the Ten Commandments, are moral laws, which Jesus insisted on upholding. And since the Old Testament prohibitions against homosexuality fall into the category of moral law, they are fully supported by Jesus. For proof, just look at Matthew 5:17-19 :

Then the anti-gay and pro-gay Christians realize that they’re making a scene at Starbucks, and go their separate ways.

But let’s think about what they both just said.

The first crucial thing to note is that nowhere in the Bible are moral laws distinguished from ceremonial laws. That’s a purely man-made distinction. In other words, it is up to Christians to decide which Biblical injunctions are eternal and universal moral rules that need to be upheld. Determining which laws are “moral” and which “ceremonial” has always been part of Christian history. And Christians have always allowed for Biblical “laws” to migrate from one category to the other.

It was once considered against Christian moral law, for instance, for women to speak in church, and for married couples to get divorced. It used to be considered in accord with Biblical moral law for Christians to keep slaves. “Thou shalt not work on the Sabbath day” is one of the Ten Commandments. Yet today Christians allow women to speak in church, get divorced, don’t keep slaves, and on any given Sunday mow their lawns or play professional football.

And why? Because times change, and Christian “laws” change along with them. That’s how it is; that’s how it’s always been.

So when it comes to Christian moral law, what if any biblical rules do remain constant?

Is there a dependable moral standard—a criterion that never changes—by which Christians are called upon to judge every single biblical “law”?

Yes, there is. And to find it, we have only to turn to Jesus’ Great Commandment, here at Mark 12:28:

You know what other Biblical “law” is out of accord with the Great Commandment? The one which holds that people who are born gay have but two choices: to spend their lives celibate and unpartnered, or to deserve being shunned and denigrated because their very existence is a moral offense to God.

It is time for the condemnation of LGBT people to be understood by all Christians as an egregious moral affront to God, since it is in such clear violation of what Jesus Christ himself called the most important law of all. Any Christian who argues differently is not taking God, Jesus, or the Bible seriously, and should not pretend that he or she is.

October 8, 2013 One big way to fail God and man
Recent Comments
82 Comments | Leave a Comment
"You know less 👏🏻"
Shemara Lakin When biblical “laws” no longer apply
"This clown relies on fooling others who know less then she does."
Hollybell MN When biblical “laws” no longer apply
"Right away you state atheists refuse to listen. I'll bet you don't listen either. Did ..."
JamieHaman Why atheists win arguments with Christians ..."
"Oh wow, so you did get in? Did you do all 9 months and graduate, ..."
Peter J. Markavage The Bible and sex addiction
Browse Our Archives
get the latest from
John Shore
Sign up for our newsletter
POPULAR AT PATHEOS Progressive Christian
1