Dare to believe that Jesus was God

Writing the book I have started is threatening to take over my life. That means either writing less blog posts, or writing faster/sloppier blog posts. This morning I’m going for fast and sloppy. So in what follows excuse any … I dunno, unclarities, or … the making up of words such as “unclarity.”

In response to my recent post A church for the unchurched? an online friend of mine wrote this: “I’m one of those Christians who thinks Jesus was no more, (or less) Divine than any other person.”

Whoomp: there it is. That, right there, is what I think lies at the heart of the problem so many progressive Christians have with Christianity. Sure, it’s the insanely toxic fundamentalists, and the homophobia, and the hypocrisy and the misogyny and all the rest of it. And all of that stuff is awful, of course. But what I think is also really going on with many many progXtians is that, when it comes right down to it, they don’t believe that Jesus Christ was actually and truly God incarnated on earth as a man.

(I think that what actually happens is that sooooooo many progressive Christians don’t really decide on the matter either way. On the one hand, they like the idea of Christ being divine—I daresay that deep down they want to believe that Christ was divine, because we all want life to be more wondrous and magic than, alas, we fear that it is—but on the other hand they’re afraid that believing that Christ was God would cost them too much—that it would make them laughable, simple-minded, shallow, foolish, absurdly unmodern. And they see no pressing reason to make a decision on the matter either way. I know a lot of pastors who on this point of theology waffle so much within themselves that outside of themselves they might as well hand out pieces of waffle during communion. I know a lot of progXtians who’d take umbrage if their pastor made a point of affirming that Jesus was God. And though as far as I know it’s never part of any polling data on the matter, I know it’s safe to assert that one of the main reasons untold millions of self-identifying Christians stay home on Sunday mornings is because, deep down inside, they really don’t believe that Christ was God come to earth. So they have no real motivation to go to a place that is based upon and grounded in that very specific conviction.)

So I just want to say real quick that God’s primary mode of communication with us is through our subconscious mind. Waiting for your everyday intelligent mind—the mind you use to do your taxes and strategize about your career/job and decide what to buy at the store and all that—to tell you that Christ was God is like waiting for a dog to start chirping like a bird. That’s not going to happen. It can’t. That’s not what dogs do.

Again: God speaks to us through our subconscious mind. That is where within us all the wonderful and ineffable magic and mystery of life abides and thrives. That’s where our souls exist. That’s where dreams occur. That’s where intuition churns and waits to become conscious thought.

That’s why nature is so powerful to us. When you’re standing on the beach or in the woods, it’s not your conscious mind that’s being so affected by everything around you. Your everyday brain can’t begin to process all that magnificence. What responds to the glory of nature is your soul, your heart, your whole … integrated core thing.

That’s the same place and way God communicates with you. That is God communicating with you. And that’s the part of you that church is meant to stir. Church isn’t about your little “me! me! me!” brain. Church is about the whole of your subconscious being. It’s about your soul. The thurible (which is what the guy in the picture is swinging), the kneeling, the communal worshiping, the music, the service of the eucharist, the administering of the holy sacraments, the sacrifice of tithing, the very reading of the Bible, simply being in a church where generations of people have come before God to pray and worship—where that long and intense history of pleas and veneration are seeped into and radiating off the very walls of the place—all of those things are designed to elicit in you a response that has no more to do with your everyday ego-based brain than children splashing in a pool has to do with the price of gasoline in Topeka.

And none of it works—none of it has the resonance for Christians it’s meant to have—if you don’t believe that Christ was God. Then it’s all just … people in various degrees of delusion doing stuff that’s perfectly lovely and perhaps in its own way even moving, but not really substantive in any way that can possibly matter in “real life.”

None of it passes the brain muster. It can’t. That’s not what brains are for. (This is, btw, a long way from saying that Christianity is irrational: see my post The rational genius of Christianity.)

I know this will bring me all kinds of … heartfelt objections, but a Christianity predicated upon the idea that Christ was just a man is no Christianity at all. (It drives me nuts when people claim that Jesus was just an “inspired teacher,” or a “profound philosopher.” No, no, no. Jesus was always extremely clear about claiming he was God: “Again the high priest asked him, ‘Are you the Messiah, the Son of the Blessed One?’ ‘I am,’ said Jesus. ‘And you will see the Son of Man sitting at the right hand of the Mighty One and coming on the clouds of heaven.’” “Before Abraham was, I AM.” “‘You,’ they said ‘a mere man, claim to be God,'” etc. If Jesus wasn’t God, then he was definitely one seriously deluded nutjob, and no serious teacher at all. And if Jesus wasn’t God then he also never walked on water, changed water into wine, spontaneously healed anyone, withered a fig tree just by talking to it, raised anyone from the dead, or reappeared after he’d been crucified: mere men, of course, can’t perform true miracles. And if Jesus didn’t perform the miracles he’s credited with then the Gospels cannot be anything but bullshit. You remove the God from Jesus, and I don’t know what you have, but it’s no more Christianity than an omelet is Easter.)

I don’t personally care whether or not any given person is Christian. That’s their business. But if you’re a Christian who isn’t quite sure whether or not Jesus Christ was actually God, I would encourage you—especially now, one day before the three holy days before Easter (for more, see my recent This week be churched)—to dare to step into that magical, trusting, childlike subconscious place where you allow yourself to believe that he was. Where you allow yourself to believe that God so loves us all that he came to earth as a man, proved via his miracles and resurrection that he could be none but God, and then, exactly as he said he had come to do, allowed his human body to be destroyed, as a way of evidencing, in the most graphic and memorable way possible, that he was forever destroying all the terrible, life-crushing karma of every sin that had ever been done to or by anyone—including you.

You know how in the New Testament Jesus is always saying, “Believe and you will be healed”? What that means is that you have to give it up—you have to turn off your doubting, ever critical, ever suspicious mind—before you can take what God as Jesus is offering, which is a way to simply enjoy life more (and to also be comforted when you most need it). Jesus isn’t saying, “Believe, so you can be duped.” He’s saying, “You’re the boss. You can brain-block me if you want to: that’s why you have free will. Or you can choose to believe who I am, and thereby experience the joyful lightness that comes from knowing that you are not, after all, guilty of anything: that you are good and fine and forgiven and loved and in no danger whatsoever, because the very God of Gods has your back always.”

If you’re a Christian who doubts the full divinity of Christ, for today and the next three days go ahead and be all in. Allow yourself to believe in the miracle of Jesus Christ really and truly being God. From such a suspension of your doubt you have nothing to lose, and just possibly everything to gain. 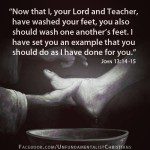