Dude: Being a Christian doesn’t mean your girlfriend has to be one, too

Dude: Being a Christian doesn’t mean your girlfriend has to be one, too August 5, 2014 John Shore

I am non-Christian, but am open to many aspects of several religions, including Christianity. The love of my life told me that God doesn’t want us to be together because it takes him away from God. I have been very supportive of his faith, and love hearing about what he has learned in church. But he says that to have a truly happy relationship, it has to be centered by, and on, God.

He left me, but he says that he still wants to be with me, but that God wants him to worship Him, and that our relationship takes from that, because it wouldn’t be centered around God. He says our relationship would a one-sided teaching one—him teaching me about God—when what he needs, because that’s what makes God happy, is a relationship where him and his mate teach each other about God.

I think that he and I are meant to be together, and that our relationship is a gift that God gave us both. I think my boyfriend has confused what he thinks God wants for him and what God actually does want for him. I want to be with him more than anything in the world. He is the only one I have ever felt truly comfortable in my own skin around, and he is my whole world. I feel such a strong connection to him, one that pulls me in his direction more by each day.

So, what I’m asking is this: If God loves everyone, and you love God, but you also love someone with a different faith than you, should you break up with that person? And if you didn’t, would God truly frown on that relationship, even though it is love?

Dear young (I assume) woman who wrote me this:

First, thanks for trusting me with this personal concern of yours. It means a lot to me.

Your question for me boils down to this: Should a Christian in love with a non-Christian break up with (or never pursue a relationship with in the first place) the non-Christian, since the two of them don’t share the same faith?

When it comes to matters of love there is no should. Everyone must feel their own way to their own best truth.

Speaking personally—because, again, there really is no other right way to talk about love—I would absolutely and under no circumstances reject a woman I loved just because she wasn’t, as I am, a Christian. Why? Because (as John tells us in 1 John 4:8—not that we need the Bible to tell us this, though it’s awesome that it does) “God is love.”

So I would have no doubt whatsoever that the love I felt for the non-Christian woman was as purely a thing of God as could be anything else in the universe. (As for the “being unequally yoked” thing, see my comment below.)

Moreover, if my beloved subscribed to a faith tradition other than Christianity, I would be extremely open to everything about her faith system that I felt was only a different way of expressing the same sacred and inspiring truths that I find so perfectly expressed in Christianity. As I wrote for tenet #7 for the group Unfundamentalist Christians:

The belief that throughout history God chose to introduce himself in different ways into different culture streams is more reasonable, respectful, and compassionate than is the conviction that there is only one correct way to understand and worship God.

God is God, love is love, where love is God is.

Them’s the rules of love, God and relationships. Those truths cannot and will not change.

Your boyfriend, however, will. The trouble you have is that your boyfriend’s understanding of God is, in a word, immature. And there’s certainly nothing wrong with being immature. But your boyfriend being spiritually immature means that you’re going to have to wait to see if the God he loves turns out to the real and true God—the God of love, the God of universal compassion, the God who holds all people equally worthy and good—or if, instead, he pledges his loyalty to the infinitely less worthy faux-God—the hateful God, the wrathful God, the shamelessly jealous and cruelly capricious God—that is so often fabricated and promulgated by those whose interests ultimately have everything to do with the religion of Christianity, and, alas, nothing to do with God him/herself.

While you wait for your boyfriend to choose a lane, might I suggest keeping a bit of distance between yourself and him? Why dive into water that hasn’t yet settled down so that you can see what’s beneath its surface?

See also: Letter from an atheist married to a Christian.

August 1, 2014
Her husband wants to explore his bisexuality
Next Post 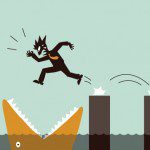 August 8, 2014 Pastors of America: Remember Mark Driscoll
Recent Comments
87 Comments | Leave a Comment
"FOR THE READER'S BENEFIT & EDIFICATION:To see https://www.monergism.com/topics/hell The Biblical information therein refutes the cultists ..."
Thomas Dickensheets Proof that believing in hell is ..."
"you quote from an apocryphal story which is not part of God's Word inserted into ..."
Gum Boocho Waiting for Bob Jones’s huge gay ..."
"The story you refer to, at the start of John 8, is not a part ..."
Gum Boocho Waiting for Bob Jones’s huge gay ..."
"There is a huge point to the prodigal son story that Jesus told that is ..."
Jesse Baker Dude: Being a Christian doesn’t mean ..."
Browse Our Archives
get the latest updates from
John Shore
and the Patheos
Progressive Christian
Channel
POPULAR AT PATHEOS Progressive Christian
1