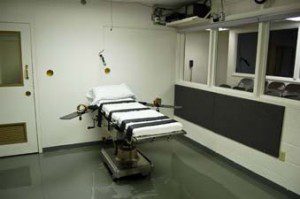 At 6:23pm yesterday, the state of Oklahoma initiated its effort to kill Clayton D. Lockett. Twenty minutes later, after being declared unconscious by a physician, Lockett cried out, “Oh man,” writhing in pain. Addled by this unexpected display of pain, one of the executioners said, “Something’s wrong.” Soon after, the window to the observation room was covered and media were escorted out of the room.

A state official later reported that Mr. Lockett died of a heart attack at 7:06pm.

The fact that this unexpected scene was preceded by months of arguments by lawyers about the constitutionality of resuming executions in Oklahoma guarantees that a debate about the death penalty will ensue. Those who have argued that this ultimate form of punishment is “cruel and unusual” will make last nights scene their case in point. The Governor of Oklahoma has already declared that a thorough investigation of what went wrong will take place before any other executions go forward. Privately, in conversations at home and on their computers, many will say, “Did he suffer? Sure. But why shouldn’t he after what he did.” Most national polls show that support for vs. opposition to the death penalty is about 50/50. Both sides will have plenty of people to argue.

But I think it would be the greatest of tragedies if we did not notice that what happened in Oklahoma last night reveals perhaps our deepest national self-deception–that, no matter what goes wrong, we will fix it because we are in control.

The reality of punishment in America is that executions are but the furthest extreme of a system of control that has grown out of our collective need to reign in an unpredictable world. In his book The Collapse of the American Criminal Justice, Harvard legal scholar William Stuntz outlined how the path to mass incarceration in America was paved by litigation that sought to proscribe all dangers. In this attempt, we created a society where literally everyone is a law-breaker. But, as Michelle Alexander has documented in her work on the “new Jim Crow, African-Americans are subject to arrest under these laws at much high rates than whites. The so-called “War on Drugs,” as it has been carried out in communities of color, has led to a more than five-fold growth in US prison populations over the past 30 years. 2.3 million people are in America’s prisons today. Some 55 million have been there at some point now, carrying the life-long curse of a criminal conviction.

“If you do the crime, you do the time,” our popular wisdom warns. But this simply isn’t the case today. Over 150,000 nonviolent offenders are serving life without parole in our prisons, while some who have killed are able to take a plea and never do any time at all. All of us break some law, even daily. But most of us will never even face charges.

What does this have to do with a botched execution in Oklahoma last night? Everything, I think. Because as cruel as Mr. Lockett’s punishment may have been, the fact is that it’s not unusual. Columbia University scholar Robert Ferguson documents the spiral of ever increasing severity in American justice in his new book Inferno. “Criminal justice has gone astray, lost in a dark wood of its own making,” he concludes. We have, like Dante, descended into hell, trusting that it will protect us. Only, we’ve tried to keep this hell behind prison bars. We’ve done it, all the time, believing that its worth the cost to maintain our illusion of control.

For Christians a botched execution during our celebration of Easter must remind us that an execution is at the center of our story. But our Lord was not the executioner, scrambling to maintain an appearance of control in a world gone mad. He was, instead, the one who chose to remain silent before his accusers. “If anyone had the right to set things right and gain control, Jesus did.

In his humility, I think, Jesus shows us the possibility of another way. Will Jesus’ way promise the safety of everyone? No. But we fool ourselves if we believe America is safer today that it was before last night’s execution.

Jesus reveals our self-deception to help us see that our greatest danger is not losing control. It’s losing our soul.

April 29, 2014
One Year Anniversary of Moral Monday
Next Post

May 5, 2014 Happy Birthday, Patheos!
Recent Comments
0 | Leave a Comment
"Official behavior often reminds me of what is supposed to be a wisecrack. “The beatings ..."
John Gills Arrests Resume As Moral Movement Continues
"I didn't know Professor Smith got arrested; I'm still in my hounded-endlessly-until-I-grab-a-baseball-bat phase (much of ..."
Al McMullin Walle Political Science Professor on Why He ..."
"The Greensboro Police Department and rich white people ("neighborhood associations" they call themselves keeping the ..."
Al McMullin Walle Political Science Professor on Why He ..."
"I wish I still lived in Goldsboro so I could join you there. There is ..."
Paula Woodworth A Palm Sunday Invitation to Holy ..."
Browse Our Archives
Related posts from Jonathan Wilson-Hartgrove

When Clarity of Belief Is Important
This is a companion post to last week’s reflections on faith as...
view all Progressive Christian blogs
What Are Your Thoughts?leave a comment
Copyright 2008-2021, Patheos. All rights reserved.
Close Ad