One Year Anniversary of Moral Monday 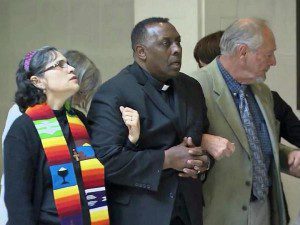 A year ago today, Moral Mondays began in North Carolina. When 17 people were arrested at the General Assembly on April 29th, 2013, Rev. Nelson Johnson of Faith Community Church in Greensboro, North Carolina said, “It is my hope and my belief that this will spark a broader movement.”

A graduate of A&T University, Rev. Johnson knew well the story of four students who sat down at a Woolworth’s lunch counter February 1st, 1960, sparking a nationwide sit-in movement that would inspire thousands to engage in civil disobedience, ultimately defeating Jim Crow segregation in the South.

The “broader movement” that Rev. Johnson described in the language of faith is now a reality, not only in North Carolina but also throughout the United States. Nearly 1,000 people were arrested at 13 Moral Mondays in North Carolina last summer. After the General Assembly adjourned, Moral Mondays followed the representatives home to 30 communities across North Carolina. On the second Saturday in February this year, 100,000 people marched on Raleigh in a Moral March. “Moral Monday” actions have now followed in South Carolina and Georgia as citizens have become aware of the way big money is attempting to restructure government at the state house level.

Just this week, the Forward Together coalition here in North Carolina announced that Moral Mondays will resume in Raleigh on May 19th, 2014. At the same time, fifty organizers will spread throughout the state to work full time on building the coalition of people who want to stand together for justice through a Moral Freedom Summer Project. Pausing to look back on all that has happened this past year, the NC NAACP released this video of the first Moral Monday today.