I wish there had been a specific Point of Demarcation.

A bright red fence or something. 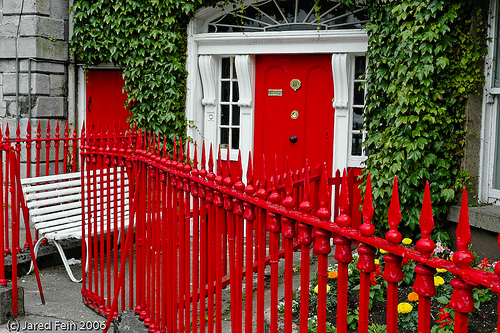 One that came with a warning sign that said: Cross over this and there’s no return.

My girlfriend Susie and I had lunch last week. We had a lot of catching up to do. We haven’t really spent any time together since 2002. A lot has happened in our lives in the past 10 years. Our kids grew up, and so did we.

She told me how surprised she was to learn I wasn’t a registered Republican. (For the record, I’m not a registered Democrat either.)

When Susie knew me best I was Sarah Palin without the boob job.

I know you are howling and not about the boob joke. (Okay maybe about the boob joke). You just can’t imagine me as Sarah Palin. Let me explain what I mean by that. Back in those years — the ones in which I was raising a family — I was, as my daughter likes to say, the kind of mother who not only hovered over their lives, I would come in for landings.

Strict doesn’t even begin to cover it.

Okay. I think we only did that once but that was enough to convince my children to pray, “Make me a bird, Lord, so I can fly far, far away.”

Oh, I wasn’t mean. I was just convinced that the world fell into two distinct groups — us and them.

You were either Good.

Obviously, I overcame that. I never would have even whispered that last word in the former incarnation of myself. (You might just think I resorted back to my trailer park upbringing. Maybe I did.)

Leaning over her salad, Susie lifted her fork to punctuate the air and said, “Isn’t it freeing not to be held hostage to a one-issue agenda in your life anymore?”

Every generation has its one issue agendas, it seems. For my generation it was abortion. For my children that issue is homosexuality.

There are other issues, of course. If you are a Washed-in-the-Blood-of-the-Lamb believer, and I am, people of great intellect continue to debate the role of women in the church, or rather the lack thereof.

Bert Montgomery has taken on that issue over the Burnside Writers in an essay titled Ode to Being Unladylike. And Rachel Held Evans has written an entire book about Biblical Womanhood. Rachel is smart as a whip. If I were a man, I’d think twice before I got into a debate with Rachel about a man being the headship of the church and all that other stuff that I used to care so much about.

That’s what I  mean about that line of demarcation.

I keep telling myself I ought to feel guilty about my lacking of caring.

But then I’m reminded that I can’t go back across that bright red fence because I already escaped it.

The truth of the matter is that I’ve come to realize that it’s not when we argue over our differences that we change anyone’s minds. It’s only when we are able to agree upon our similarities that we are truly able to see the Spirit of God in one another.

I feel pressed for time. Like I’ve spent a goodly portion of my life fighting the wrong battle. That’s not to say that I don’t care about the role of women in the church, or the number of unborn children aborted every year, I do. I care deeply.

I just care differently than I used to.

And I care more widely than I used to.

Whenever my kids used to ask who I loved the most I would always answer, “I love you all the same but differently.”

I feel that way about the issues of war, homelessness, poverty, crime, abortion, abuse, trafficking, politics, and, yes, the role of women in the church. I care about them all the same but differently.

I’m not sure when it happened, or even how it happened, but somewhere or another I crossed that line of demarcation from fundamentalist.

I no longer hold my faith hostage to one issue.

“So are you a liberal?” someone asked me recently.

“I don’t know,” I said. “If caring for the homeless and the brokenhearted makes me a liberal then I guess so.”

Whatever peg others attach to me, I pray God continues to enable me to love more liberally as I age.

Knowing me the way I do, I’m going to need it.

March 13, 2012 TMI: When does news become gossip?
Recent Comments
23 Comments | Leave a Comment
Browse Our Archives
get the latest from
Evangelical
Sign up for our newsletter
POPULAR AT PATHEOS Evangelical
1