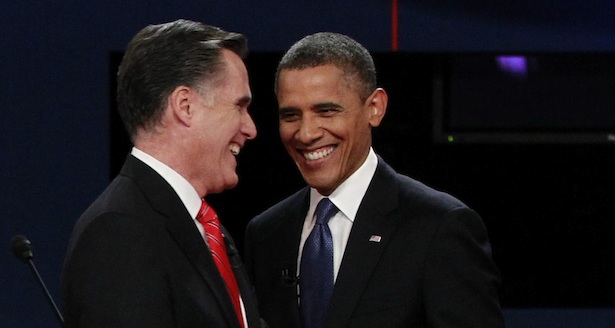 Did you watch the debate?

I was driving home from Seattle so had to listen to the first hour the old-fashioned way, via a radio. Radio seems to be the perfect medium for debates. Listeners can’t see the eye roll, the smug lift of the chin, the wry grin, the tightening of the jaw, the flashing smile, or the false pleasantries.

On radio, all you get is what the candidates say.

What I heard is Romney and Obama both running roughshod over the moderator.

I wasn’t sure who was moderating, since I couldn’t see him and I had missed the introductions in my search to find a station carrying the debates. It didn’t take me long to figure out that it was PBS’s Jim Lehrer. Poor man couldn’t get a word in edgewise, and certainly couldn’t steer those wild horses in the right direction.

I get that a candidate must come off as being strong, forceful even, to lead this nation of people nursed on the notion of “My rights trump yours.” To hell with community and what’s best for the whole of us.

Public forums are at their best when they are well-moderated, but moderating is no easy task. One must keep control of the reins the entire time, lest the mules wrangle them away, which is exactly what happened in the first fifteen minutes of last night’s debate and even Mr. Lehrer seemed to be aware of it. Bless his little heart, Mr. Lehrer tried unsuccessfully to get Obama and Romney to quit acting like school boys in a tussle but they simply ignored him. What he needed to do was enter the fray and jerk them both back by their collars and tell them that they had better play nicely or he was going to slap them into Sunday.

People who study these things say the clear winner last night was Romney. 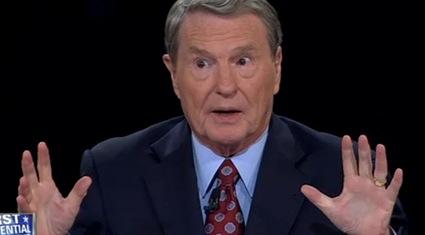 Perhaps so, but the clear loser last night was Lehrer.

And the American public.

Primarily golden-ticket holders often referred to as the Middle Class, who once again, were being fed a pile of hooey and being told it was Hamburger Helper.

Here’s some of the inaccuracies stated in the debate according to FactCheck.Org:

The two issues that are weighing heavily for me as I consider who I will vote for in this upcoming election are jobs and health care. The health care component has grown even more serious for me over the past two months as I’ve spent the bulk of those months in and out of hospitals and cancer clinics with my mother who has lung and brain cancer.

In addition to the cancer, my mother has blood clots that needed treating. The shots she has to take daily cost $2,800 a month. Fortunately for us, our mother has double-health insurance, and while Medicare doesn’t pay for those shots, her other insurance does. Without that coverage, we simply would have to let the blood clots run their course.

Doctors have been very clear — our mother is dying. They gave her a couple of months. This week marks the end of that estimate. We are grateful for every single day. We consider our mother a walking miracle right now, even though we all realize we are on a death march.

So, yes, the health care issue weighs on my noggin like an ill-fitting beanie. Obamacare might be a bold move but that doesn’t mean it’s a good solution to the health care crisis in the country.

In addition to my concerns about health care, I’m concerned about the job market in this country. I teach college students, all of whom are hoping to be gainfully employed in a real job one day soon. A career job. One that pays the mortgage and car payment and allows them a dinner out and a movie on Saturday night.

These students are good people. They care about their grades and their siblings serving in the military. Romney’s promise to increase the military budget bothers me. While I would like to see care for our returning veterans increase, the last thing I think we need to be inflating is a budget for our military. I was chatting with a solider in Afghanistan recently, literally chatting online with him, while he was holed up in some compound and me in a home 20 miles from Fort Lewis, Washington. I’ve known this soldier all of his life. He’s serving in one of the most well-respected branches of the military, a position he had to earn with sheer doggedness and buckets of sweat. We were discussing matters of military when he mentioned the wastefulness of war.

He wasn’t referring to loss of life, although there is that, too.

He was speaking specifically about the ways in which money is burned like kindling in the war zones.

And he’s not the first soldier to tell me that.

We all know that the real benefit to war is the money that private contractors are making. They are bilking the Middle Class who are standing by waving their flags and shouting God Bless America as they ship their sons and daughters off to fight wars that are ill-conceived and poorly-executed, though bravely fought with valor and idealism.

The pull-and-push of states rights versus federal rights is something we discuss-in-depth in that college class I teach. No Child Left Behind is a fine idea in theory. In practice, it’s a frigging nightmare. Education is best left up to the individual states to figure out.

For all his sweet-talking ways, Obama has not made educating future generations a priority.

And, here’s the thing that really is bugging me, nobody seems able to bring our federal debt under control and to put a stop to the obscene profiteering and corruption of certain said corporate powers controlling Congress.

That the Supreme Court allows this commandeering of elections by Corporates Are People too makes a woman like me want to go all menopausal and slap some sense into somebody, anybody.

Others have rightly pointed out that there was no mention of the growing population of the poor in this nation, or the escalation of the epidemic of child abuse, or the ever-expanding homeless community during the debates. 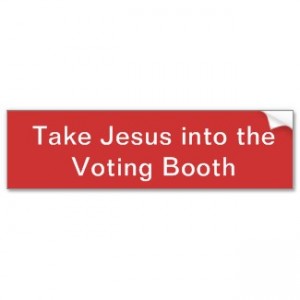 I tell myself it doesn’t really matter — that God controls my future. And while that’s true, He does, I know my vote matters because somewhere out there is a father who can’t afford the medicines his child needs, a woman who can’t get a decent job, and over 300 kids murdered on the streets of Chicago, kids who don’t worry about getting an education because they don’t dare hope for a future.

What about you? What were your thoughts on the debates? And do you have your mind made up already?

October 7, 2012 Books for the Burn Barrel
Recent Comments
49 Comments | Leave a Comment
Browse Our Archives
get the latest from
Evangelical
Sign up for our newsletter
POPULAR AT PATHEOS Evangelical
1