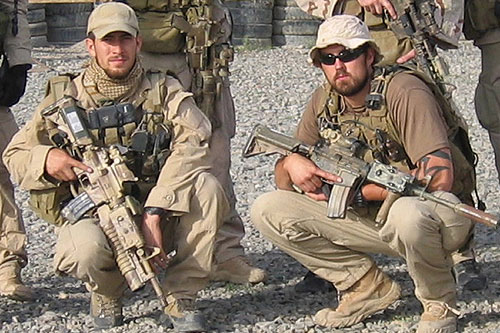 Jammed between rocks, we kept firing, but Danny was in all kinds of trouble.. I watched in horror as Danny went down, this beautiful guy, husband of Patsy, a friend of mine for four years, a guy who had always been last away while we retreated, a guy who had provided our covering fire until he couldn’t stand any more. And now he lay on the ground, blood pouring  from his five wounds. And I was supposed to be a fucking SEAL medic, and I could not do a damn thing for him without getting us all killed. I dropped my rifle and climbed over the rock, running across open ground to get to him. All right. All right. No hero bullshit. I was crying like a baby.

The following is an interview I had with Gold Star Mother, Cindy Dietz-Marsh, mother to Danny Dietz. The interview was conducted via email. I sent Cindy questions and she graciously provided her insights. Watching the movie was difficult for me. I can’t imagine how Cindy and Danny’s father, Dan Dietz, managed to get through it. Producer Peter Berg told The Daily Beast’s Tina Brown that the screening for the families was very tough.

Karen: Your son’s birthday is coming up this month – Jan. 26. Do you have a ritual that you practice to help you through that day?

Cindy: We usually have a balloon release at the cemetery and the family gets together with close family and friends.

Karen: How did you learn that your son had been KIA?

Cindy: When we got our first knock on June 28th we were told our son was MIA the next day we flew to Virginia Beach to await the news with my son’s wife. On July 4th we got the final knock, letting us know our son was gone.

Karen:  Did Danny ever talk about the “What ifs” with you? The what if I don’t return…

Cindy: Never.  I never knew he was in any danger.

Karen: My own mother had a premonition that my father would not return from Vietnam. My father had it as well. Did either of you have such a premonition?

Cindy: The day we heard the helicopter was shot down I had a thought race through my mind – as if God was telling me my son was not coming home – but at that time I blew it off. Not until years later did I remember that thought.  It saddens me to this day.

Karen: What is the most difficult thing about being the parent of a soldier?

Cindy: I never thought of it as difficult until I was told my son was KIA.

Karen: How did you prepare yourselves to view this film? Had you read Luttrell’s book prior?

Cindy: I didn’t. I was terrified of what I was about to see. No, I have not read Marcus’s book all the way through. I have skimmed through bits and pieces of it.

Karen: You, and others, have made it a point to clarify the dramatizations in Lone Survivor. Since movies, like books, are works of art, and, thus, not literal translations, why do you think it’s important for the audience to have the straight facts?

Cindy: Because people need to know what our sons and daughter do when they sign that dotted line. People need to know the cost of their freedoms and what our loved ones do for all of us. Meaning they sacrifice their lives for just that. 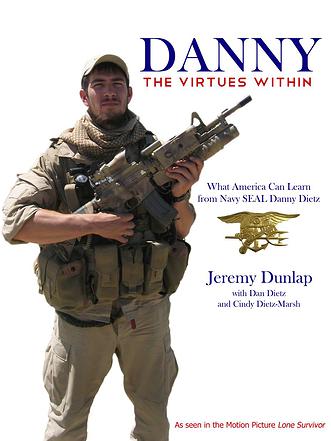 Karen: You worked with author Jeremy Dunlap on the book, Danny: The Virtues Within, and have been very forthright with the fact that when Danny went through a time of floundering, a time when he tested you as parents. What compelled Danny to draw deep from within and transform himself into a SEAL after all those missteps?

Cindy: My son was born to be a SEAL. He was not made one when he joined the service. It all started at home. He was very rambunctious as a toddler, inquisitive and intelligent He tested 2 points above genius level.

Karen: Are there things you think that the general population fails to understand and appreciate about the sacrifices you and your family have made?

Cindy: I think sometimes we all take our freedoms for granted.

Karen: Are there ways in which you feel the country has failed its soldiers and their families?

Cindy: No, but I do believe they could support our troops better.

Karen: Part of the discussion of every war is what is the point, what have we gained, was the sacrifice worth it? How do such discussions affect you?

Cindy: 9/11 happened on our home turf, the fight to keep our freedom is better there than here. Was it worth it to you – for my son to give his all for your freedom? I leave the politics to the politicians!

Karen: What has helped you the most through the years since Danny died?

Cindy: My family and the friends I have gained through this terrible tragedy to our family.

Karen: Is there anything else you would like to add that I have failed to ask?

Cindy: Like Marcus has said, a part of me died on that mountain alongside my son but a part of me lives on to honor and respect and uphold what he has done for you and for me and for all the world.

Karen Spears Zacharias is author of After the Flag has been Folded, HarperCollins.

January 17, 2014 MLK & Sudan's Human Rights Disaster
Recent Comments
1 Comment | Leave a Comment
Browse Our Archives
get the latest from
Evangelical
Sign up for our newsletter
POPULAR AT PATHEOS Evangelical
1

Doubling-Down on Christian Persecution: The Cost...
The Chorus In The Chaos
Related posts from Karen Spears Zacharias