Austrian artist Deborah Sengl has unveiled a new creation:  a crucified chicken.  The work will be on display in a deconsecrated church, now the city museum of Wiener Neustadt, in Lower Austria.  Since 1966 the late Gothic monastery church, which originated in 1444 as St. Peter on the Barrier Catholic Church, has been home to art exhibitions.

Don’t worry, though, Sengl says.  This new work is not intended to offend people of faith.  Rather, according to the artist, it is a criticism of cruelty to animals, a statement about the pain inflicted by butchers during food processing.

The Observatory on Intolerance and Discrimination Against Christians in Euroope, which was founded by Dr. Veronika  Gudrun Kugler in 2010, just isn’t buying it—and neither am I.

That’s because in reviewing the art on Sengl’s website, I found this:

Kugler began her career painting animals, sports, military and police; but later, especially since 2006, her art has reflected her contempt  for the Catholic Church, for the priesthood, and especially for Pope Benedict XVI.  Her early work titled “Wolf in Sheep’s Clothing” (2000) evolved  into the “Wolf Sheep” (2003), “Sheep Priest and Wolf Priest” (2006), to “Wolf Sheep Priest” (2008), and finally, the “Wolf Sheep Pope” (2011).  Also in 2011, in “Blessed Ignorant” (2011), Sengl shows Pope Benedict dressed as a wolf in sheep’s clothing, licking the floor with his menacing grimace.

August 19, 2013
You’ve Depended on Catholic Answers; Now, They’re Depending on You
Next Post 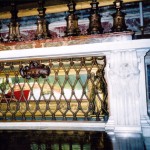