Glitz, Glamour and a Great Film: My Evening With the Stars on the Red Carpet

There’s been a calm here at SEASONS OF GRACE for a few days. The whooshing sound you may have heard was only me, rushing back and forth to pack for a two-day trip, then flying to Atlanta where I stood on the red carpet for the World Premiere of Giving Films’ “90 Minutes in Heaven.”

“90 Minutes in Heaven” tells the story of Pastor Don Piper’s death in a car-truck collision, his visit to heaven and finally, his return to earth where he experienced intractable pain, 34 surgeries, and a lengthy recovery. (I’m not giving away any secrets here, because his book by the same title has sold more than 7 million copies worldwide.)

I plan to publish my review next week, in time for the September 11 release of the film nationwide.  Right now, suffice it to say: I liked it!

But for today, I hope to generate some excitement by sharing my star-studded experience with you, my readers.

I’ve been rubbing elbows with the stars and chatting with some really great people this week, and I’d like to take you along for my adventure!

On September 1, reporters and fans converged upon the Fox Theatre in Atlanta, where stars and movie-makers came together  for the red carpet event celebrating and introducing their new film. Thanks to Carmel Communications, I had a spot along the red carpet where I could capture the glamour and the glitz, shake hands with the cast and crew, and ask each celebrity a question about the making of the film.

This was my first “red carpet” experience, at which I got to see the stars, crew, fans and wannabe-stars “up close and personal.” 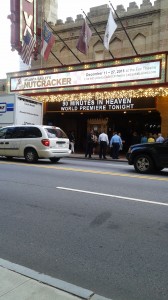 I enjoyed the film in the iconic theatre which once hosted the premiere of “Gone With the Wind.” Designed for Atlanta’s Shriners organization, the Fox is modeled after the ancient temples of the Far East and boasts soaring domes, minarets and sweeping archways. The interior is enriched with gold leaf details, sumptuous textiles and trompe l’oeil art.

The theatre was  packed with the famous and the not-so-famous: stars and their families; movie extras from Atlanta; the director, producer and film crew; media from around the country; devoted fans; and a special contingent of foster children and their families, who filled the magnificent balcony. The crowd was enthusiastic, applauding loudly and offering a standing ovation at the end.

At least among this friendly group, “90 Minutes in Heaven” is already a big box office success!

Afterward, I attended the VIP gala in the theatre’s ballroom, where celebrities mingled with everyday folks and uniformed waiters offered hors d’oeuvres and beverages. (My favorite was a tasty crab dip!)

Then on September 2, there was the junket. Across the street in our hotel, reporters were given the chance to interview the film’s stars and the real people whose stories they portrayed on the big screen.

I participated in four face-to-face interviews, with

HAYDEN CHRISTENSEN, the actor who played the bedridden Don Piper in the film, alongside the real DON PIPER.

Hayden, who is perhaps best known for his role as Anakin Skywalker in Star Wars Episode II–Attack of the Clones and Star Wars Episode III–Revenge of the Sith, was typically low-key. We talked about the challenge in portraying a man in a hospital bed, yet not allowing the role to be “flat.” The most difficult thing, Hayden told me, was showing physical pain–not emotion, but pain. He used a number of “tricks”, even hurting himself to achieve the desired look. (Christensen also appeared in Shattered Glass and Jumper, and played on television in Life As a House, the Fox Family Network series Higher Ground, and the made-for-TV movie Trapped in a Purple Haze.)

And DON PIPER–well, I’ve written about him before, and I need to repeat: He is great! He’s a man whose life story is now being flashed on the big screen; and yet he is humble, caring and considerate, and prayerfully accepting God’s will in his life.

Kate has a long list of movie credits including The Horse Whisperer, Remember the Titans, Blue Crush, Still Alice, The Rules of Engagement, Win a Date with Tad Hamilton, Wonderland, and Beyond the Sea. She is probably best known for her role as Lois Lane in Superman Returns.

EVA PIPER had such a ready smile and chatted affably about the importance of family, the need for God in one’s life.

MICHAEL W. SMITH, actor and musician, and his son TYLER SMITH, co-composer with Michael of the movie score.

Michael was a generous father, ceding the floor to his son, with whom he had worked to compose the lyrics. Together, the two explained the routine and the rigor of developing a movie score: How they worked as a tag team, with each of them taking a scene and beginning the composition, then inviting the other to step in, suggest small changes, and write the complex score.

It was the first time I’d heard from the musician’s point of view how music enhanced what was happening on the scene, how each part of the composition was titled, and especially, in this case, how they needed a score without lyrics so that nothing would detract from the drama being enacted.

I’m an old fan of Michael W. Smith’s music, dating back to the ’80s and my years at an evangelical radio station in Detroit. (Raise your hand if you remember “Friends” and “Great Is the Lord”!) We talked about how this new challenge, as an actor in the role of Don Piper’s friend, fellow pastor Cliff McArdle, and as co-composer in collaboration with his son Tyler, has opened new opportunities to lead others to Christ.

Director/Writer MICHAEL POLISH and Producer RICK JACKSON. Director Michael Polish, who is husband to the elegant Kate Bosworth, is a Catholic and brought his perspective to the making of the film. Perhaps it was he who suggested using candles during the prayer scenes, when people around the world prayed all night for the critically injured Piper.

And Rick Jackson? Well, he’s the Producer of “90 Minutes in Heaven” but he’s also the CEO of a new film company, Giving Films, which pledges 100% of its profits to help charities in the U.S. and around the world. Rick talked about his vision for producing quality faith-based films (“90 Minutes” is the

first film for Giving Films, but it won’t be the last), then using the profits to support pregnant women, orphans and children in foster care, children with life-threatening illnesses, victims of sex trafficking, wounded veterans, and more.

This was a fun part of my morning! I had the opportunity to interview the Piper children: that is, NICOLE, CHRIS AND JOE PIPER, now grown; and the three children who played the Piper kids in the movie.

The three “Real Pipers” talked about how the movie depicted the situation, and how stressful that time of their lives was for

small children. Chris and Joe gave credit to Nicole, their big sister, for guiding them and protecting them during the long months when they’d had to move to their grandparents’ town, transferring mid-term to a new school while their mother remained at home at their father’s hospital bedside.

And as for the child actors who played the Pipers: Twelve-year-old ELIZABETH HUNTER was elegant cast as big sister Nicole, and it was easy to see the friendship that had developed between the real Nicole and her big-screen counterpart.

The boys who played the six-year-old Piper twins were HUDSON MEEK (Chris) and BOBBY BATSON (Joe)–and they were all boy, full of energy and happily engaged in play. Asked by a reporter what was their favorite part of making a movie, both boys responded with the same heartwarming “favorite thing”: They liked going to McDonald’s every day!

Watch this space for more information, including my full review, in the days ahead.  And if you enjoy the photos of Hollywood stars, check out my Seasons of Grace page over on Facebook to see the even more of the red carpet celebrities!