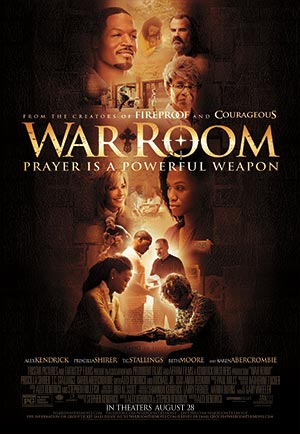 I was going to completely ignore the Kendrick brothers’ newest movie WAR ROOM. I’d read some sullen reviews by critics who complained that its religious theme was a no-brainer (“Prayer is good”).  Its simplistic plot, said those critics, failed to engage the viewer, offering pablum instead of a respectable plot with a climax and denouement.

But then the film opened across America, and acclaim from viewers began piling up in social media–on Facebook and Twitter.  Entertainment critics touted it as a “box office success” and “number one in theaters.” I was ready to judge for myself, so my husband and I went to see it over the Labor Day weekend.

And here’s the thing: We really liked it!

I’m not a fulltime movie critic, just an ordinary wife and mother who sometimes plays one on the Internet; but I know what I like. WAR ROOM was church-y, as its most vociferous critics claim; but we liked it nonetheless. Frankly, I’m having a hard time seeing why its theme of faith and the power of prayer is something to be scorned. And the moviegoers who filled the theater Sunday evening seemed to agree with me! The crowd whooped and hollered and applauded all through the film, enjoying its comedic moments and its lip-smacking good message.

When we left the theater, cheeks slightly sore after two hours of smiling, we bumped into groups of movie fans in the hallway, talking about Jesus. So what’s not to like?

I’d like to have a word with those critics (I won’t name names) who bemoan what they consider a saccharine-sweet lowbrow production, who demand to know why a movie like this should even be made.

I don’t go to movies that are violent or X-rated. I don’t go to cartoons. I wandered around the 20-theater complex, looking at movie posters and trying to spot another film I might enjoy on another day. I didn’t find one.

The mega-theater where WAR ROOM was playing was at the same time showing eight (EIGHT!) R-rated films which I would not see, as well as “Ant Man” and “Fantastic Four” and “Jurassic World” for kids or sci-fi lovers. WHY SHOULDN’T THERE BE A CLEAN, FAMILY-FRIENDLY, FAITH-BASED MOVIE FOR THOSE WHO WANT IT?

This week’s box office results are proving that there are MANY people who feel un-served by Hollywood, and who want exactly this type of film. There are plenty of us who don’t enjoy cutting-edge dirt.

So go on, exclaiming about how uncultured are the people who like message films. I’m not listening.

September 6, 2015
Joke With the Pope! New Website Wants YOUR Joke About the Pope and the Catholic Church
Next Post