Hekate: Goddess of Our Time

From pop culture references to this Goddess of the Underworld, to spiritual writers contemplating her archetypal meanings, Hekate has emerged as a Goddess of Our Time. More importantly, as the Witch Mother, Hekate has appeared to her chosen offspring in ways that can be startling and overwhelming. A common theme within this intimate experiences of Hekate is that she appears during our darkest moments. Hekate is primal power, the source from which all life flows. She comes in many guises, from the ancient crone to the mighty sovereign women. In all of these faces, she speaks of healing, power, and a call to return to her crossroads.

The Crossroads Where Culture and Experience Meet

Indeed our culture is a crossroads. Sometimes called a “Tower Time,” in reference to the tarot card that symbolizes a great downfall, we are living in an age where the old systems are in rapid decline. Piece-by-piece the tower that was the dominant Christian patriarchy is tumbling. This isn’t a lesson in the history of the world since World War II, but to recap (just in case you forgot) the heteronormative, racist, bigoted, sexist Christian white male setting all the rules for society has been served his notice. While this very moment may seem like a backlash from these types, overall the walls they built around us all have been cleaved by movements from a plethora of groups they used to control.

What’s all this have to do with an ancient goddess of witchcraft? Plenty.

Hekate is a primal force that arises when society, or individuals, reach a crossroads. For individuals, she appears in dreams and visions, hearkening us to the deeper world within. At the cultural level, she reflects the zeitgeist of tipping points in history.

She is the embodiment of all those who have had enough of being pushed aside, raging at her abusers, yet she is also the tender healer who guides us through the necessary underworld journey so that we can stand in our power. Far older than the Greeks who adapted her from cultures they conquered. Much more than what history portrays her as. She is the Witch Mother who burns her torches and awaits at the crossroads.

About Cyndi Brannen
Cyndi Brannen, PhD, teaches and writes from the crossroads of personal development, spirituality and true magic. Founder of the Keeping Her Keys system of spiritual witchcraft, she shares the keys of The Sacred Seven laws using practical methods ranging from journaling to journeying. Keeping Her Keys: An Introduction to Hekate’s Modern Witchcraft explores Hekate from her ancient origins to our modern understanding through magic and personal development. True Magic: Unleashing Your Inner Witch, based on the sacred seven principles of witchcraft, is a practical guide to better living through witchcraft. Read Dr. Brannen's journey from shattered to whole, and the courses she offers at keepingherkeys.com. You can read more about the author here.
Previous Post 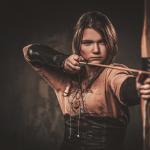 May 25, 2018
Artemis, Wild Goddess: Her Story, Themes, Correspondences and More
Next Post

Why Do So Many of Us...
John Beckett
Related posts from Keeping Her Keys