Should We Fear Hekate?

The August night air was thick enough to cut with a dagger. The clouds were low. Not one star shone through. The High Priestess summoned Hekate with all her considerable might. Suddenly, the cauldron fire exploded upward, frightening the many gathered in the circle. Without interrupting her evocation, she signaled for an attendant to control the flames. Hekate’s presence deepened the darkness, filling the space with a primal energy unfamiliar to most of the gathered. When the ritual was completed, the participants quietly went to their tents. Such is the presence of The Dark Mother: fierce, frightening and primal.

For the record, that was the first time I evoked Hekate in a public ritual. This was also the first time I called Hekate using what has become known as An Evocation of Hekate Suitable For Any Rite. And, yes, I was scared, too. But it didn’t stop me. That night happened almost nine years ago. I was only a couple of years into devotion to Hekate. One of the pagan festival organizers asked me to lead a midnight Dark Moon ritual to Hekate. How could I resist?

Read more about that night here.

Hekate is an intimidating force, but her roles associated with her chthonic aspects are indeed the stuff of nightmares. She is an Under World goddess known in some ancient stories as the leader of a horde of ravenous hobgoblins and/or dogs. If you failed to curry her favor with the proper rituals, you’d better look out. She is the night wandering pale faced psychopompe queen. Then she is Brimo, the primal ferocity of the storm and hell rolled into one.

About Cyndi
Cyndi Brannen is a witch and spiritual teacher living the coastal life in rural Nova Scotia. She is a trained energetic healer, psychic and herbalist. Merging together her training in shamanism, Tarot, past life work, meditation and her twenty year career as a psychologist, she teaches and writes about better living through witchcraft. She founded Open Circle about a decade ago which now offers online courses, including The Sacred Seven: A Course in Applied Modern Witchcraft. She has written the forthcoming Keeping Her Keys: An Introduction to Hekate’s Modern Witchcraft. Hekate’s Modern Witchcraft: The First Key is a year-and-a-day course that will start November 1. More info at keepingherkeys.com You can read more about the author here.
Previous Post 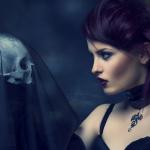 Why Do So Many of Us...
John Beckett
Related posts from Keeping Her Keys