Nasty women in the bible, I love you

Here is a partial list of nasty women in the Bible. Please feel free to add the names and stories of other such nasty women of faith.

Deborah
Judge, warrior and prophet you predicted the defeat of the Canaanites – by one nasty as hell woman, Jael.

Huldah
Prophet comfortable speaking truth directly to the religious authorities of the day.

Left her own people, lost everything, loyal even when mama-in-law bid her go.

Susanna
Sexually harassed by creepy, spying elders. Being a nasty woman, she refuses their advances and refuses to be blackmailed. Gets arrested and sentenced to death. Found innocent.

Vashti
Risked her life, and lost her marriage because she refused to be treated like property by the king.

Esther
Being a shrewd, cunning and patient woman, took on most powerful men in the region and prevented genocide of her people.

Mary Magdalene
Defied societal norms to be a disciple of One who would later be executed by the state at the behest of the religious authorities.

Sassy Samaritan Woman
Spars jovially with Jesus at the well, learns something worth sharing and returns home as first evangelist in John. Preach it sister!

The Syrophoenician Woman
Talked back to Jesus who was being a bit of a xenophobe when he called her dog. Guess what Jesus said to her for her nasty
sass? “O woman, your faith is great; it shall be done for you as you wish.”

Tabitha
First woman recognized as a female disciple. So beloved by her community and the other disciples, that she was snatched from the claws of death to keep on keepin’ on.

Priscilla, Lois and Phoebe
Women be silent in church? Nah – these nasty women schooled the hell out of men and spoke truth to power. 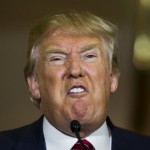 September 27, 2016
I really don't understand how anyone can see Trump as presidential
Next Post

November 12, 2016 Trump alone cannot overturn marriage equality, but that is not the point
Browse Our Archives
Related posts from Kimberly Knight

The Ten Commandments of Christian Nationalism (Part 2)
Don't Fall Into Complacency It would be easy to fall into a...
view all Progressive Christian blogs