My Route Guidance is Finished??

My Route Guidance is Finished?? May 9, 2012 Alyce McKenzie 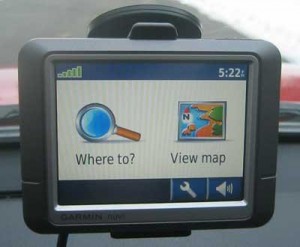 Last Saturday I was invited to be the retreat leader for a Sunday School class from a large church in Dallas. One of the members has a lovely vacation home in the wilds of east Texas near Chandler. I was to arrive by 9 am, have breakfast with the group, and lead a daylong session on the parables of Jesus. The class leader offered the opportunity to ride with one of the class members since it was a little tricky to find, but I like to drive myself places. So she sent me the directions for the 2 hour trip which involved, in the last few miles, finding an asphalt road on the right, a caretaker’s house immediately on my left, a shed on the right and then a 2 mile dirt road to the house.  Just to be safe, I also plugged the address into both Map quest and Google, printed out directions and then programmed my navigation system in my car with the address. Surely three sources of directions would get me through the 110 mile trip. Still I left 20 minutes earlier than needed, just in case.

It wasn’t a particularly pretty day. In fact, it was rather overcast. Being a Bible nerd, I was passed the time listening to the Modern Scholar “History of Ancient Israel” CD series a friend who is also a Bible nerd had lent me. I learned about how the Assyrians enjoyed deporting people and settling them in a strange land so they were disoriented and didn’t have the energy to rebel. I lost all respect for Babylonian King Nebuchadnezzar for killing poor King Zedekiah’s sons in front of him, then putting out his eyes, putting him in chains and making him march to Babylon. By comparison I should have had no complaints about my little trip. Except that as I got to the end of the 110 miles, there were an awful lot of farm roads with very similar numbers. The scenery was pretty, but after a while, I didn’t care about that. All I cared about was that a houseful of people was waiting for me. The worst moment came when, as I was driving down farm road 4109, my navigation lady in my car said “You have arrived at your destination. Your route guidance is finished.” The only problem is, I wasn’t anywhere. I was just driving down a country road with nothing on either side.

Fortunately, hearing “Your route guidance is finished,” had a motivating effect on me.

“I don’t need you!” I told her. “I can find this #$*% house on my own.” Feeling a surge of irritation and determination, I put the car in reverse, drove back down Farm road 4109 to the main road (I use the word “main” loosely) and, peering at the written directions the class leader had given me, turned right, then left, then right and, praise God, there was the asphalt road on the right, the caretaker’s house on the left, the shed on the right, and the dirt road leading into the trees. After bumping along it for 2 miles, there was a lovely house on a small lake.  I was not even late.

I dragged my rolling briefcase up the steps and rang the bell to be greeted by a jovial group of people waiting to hear me talk about the parables of Jesus.

Maybe I could invent a modern parable. But what would I call it?  “The parable of the lost leader?” And what would the lesson be? That, when it comes to God, our route guidance is never finished? That God sometimes directs us through our own ingenuity? That you should leave early if you expect to get lost? That next time, I should put aside my pride, and accept a ride?

Parables are so effective and so annoying because they offer us the challenge we most need to hear.

Then they leave it up to us to accept and act on it.

May 15, 2012 "He Ascended into Heaven..."
Recent Comments
0 | Leave a Comment
""What will end this cycle of violence? Only the power of God.”In other nations, like ..."
RustbeltRick Communicating Hope In Times of Crisis
"Nice story. In the spirit of non-dualism, I want to reflect a minute not on ..."
jekylldoc Come In and Have Breakfast
"It seems a strange coincidence that you published this post on my birthday."
Jon-Michael Ivey Who Was Born on Your Birthday?
"Here is one of many questions I would like to raise about a current popular ..."
reformr87 The Undead: Vampires, Zombies and Christians?
Browse Our Archives
get the latest from
Preachers
Sign up for our newsletter
Related posts from Knack For Noticing

God’s Only Begotten
What if, as a day-old newborn, you found yourself in the loving...
view all Preachers blogs
What Are Your Thoughts?leave a comment
Copyright 2008-2020, Patheos. All rights reserved.