Can a Catholic Learn Anything from the “Kumare” Documentary?

Can a Catholic Learn Anything from the “Kumare” Documentary? June 4, 2014 Lisa M. Hendey

Somehow it passed me by two years ago when it made its appearance in theaters, but since it was on sale for .99 on the Google Play store, I ended up watching Kumare on the plane yesterday.

Here’s the trailer for those who are as clueless as I was about the documentary:

Kumaré is a feature documentary film about the time filmmaker Vikram Gandhi impersonated a fake guru and built a following of real people.

After digging a bit, I also found this clip of the filmmaker Vikram Gandhi with the fabulous Steven Colbert:

Somehow this film about a fake guru has stuck with me. I am not a yoga person and I’ve never studied Eastern spiritualities, but I have seen people in my own frame of reference (the Catholic Church) attach themselves personally and intensely to human leaders in pursuit of spiritual understanding and personal fulfillment.

I’ve seen the messenger become more important than the message.

He builds his teaching around the one thing he feels strongly about: that his disciples don’t need a guru — that the guru is inside each of us. He calls his teaching The Mirror — Kumaré is only a mirror that people can use to gaze upon their own infinite potential, which is already deep inside themselves.

I don’t agree that there is no true spiritual teaching, that the answers to life’s greatest mysteries are locked within ourselves.

I believe in what my Church teaches:

I believe in God, the Father Almighty, Creator of Heaven and earth;
and in Jesus Christ, His only Son Our Lord,
Who was conceived by the Holy Spirit, born of the Virgin Mary, suffered under Pontius Pilate, was crucified, died, and was buried.
He descended into Hell; the third day He rose again from the dead;
He ascended into Heaven, and sitteth at the right hand of God, the Father almighty; from thence He shall come to judge the living and the dead.
I believe in the Holy Spirit, the holy Catholic Church, the communion of saints, the forgiveness of sins, the resurrection of the body and life everlasting.
Amen.

But I also believe that there are many lost souls in our world, sheep longing for a shepherd. I believe that they often, in their brokenness and searching, falsely attach themselves to idols and to people instead of to the Source and Summit of all goodness. Have I ever blindly followed my own version of “Kumaré”? Honestly, I would say yes.

Watching this film was a good experience, because it gave me the opportunity to prayerfully examine what I consider to be my own “infinite potential”.

As a result of watching Kumare, I have reminded myself once again Who created that potential within me — and I have a greater sense of what that Creator calls me to do with what he has created in me. The spiritual leaders I follow to come closer to the Word, human and humble, will never take the place of that ultimate truth.

A question for you: Have you ever blindly followed a Catholic version of “Kumare”? 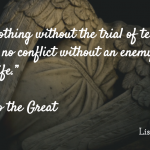