Frozen Promises; Or, Life is NOT a Journey

I was reading No Longer Quivering this morning, and the latest entry was especially poignant and thought provoking.

I spent hours trying to decide on a purity ring. I wanted one with meaning, and I wanted it to be pretty. Besides, the more time I spent there, the more likely I was to convince my parents that I really wanted the newest Ludy book. After we picked up the purity ring, my dad and I had a talk about what it meant. I told him what I wanted, and I promised to remain pure until marriage.

Looking back, I wonder why I was promising things at 14 that were so far in the future. I was blissfully ignorant of the concept of ideas and people changing, and in my naivete, I assumed that what I thought on that day would still hold true in 5 years. Even if it didn’t, I had the guilt of breaking promises hanging over my head.

I wish I’d never made those sorts of foolish promises. The result was only heartache. When I grew past my teenage opinions, I had to deal with the guilt of broken promises, but I also had to deal with my parents’ sense of betrayal because I had broken the promises I made them. The thing is, the promises that were broken were promises I had no business making. But I was a sheltered and naive adolescent, so it’s not surprising that I didn’t know any better. The problem, though, is that the organizations and individual parents of Christian Patriarchy encourage girls to make these sorts of promises. Children may not know better, but adults should.

But isn’t that the problem? Christian Patriarchy sets out to create robot daughters, daughters who are programmed instead of allowed to think and explore for themselves. The goal is not to create a daughter who can think outside the box, but to create a clone, a clone that never changes but will remain frozen in time. Life is not seen as a journey because the conclusion is assumed. Exploration is not allowed because truth is already found.

The goal is to raise daughters in a box, and as part of this the daughters are asked while still quite young to promise never to leave the box without ever having looked outside of it. And if that daughter ever leaves the box, she will have to deal with the string of broken promises she leaves behind.

Here are a couple of examples of what I’m talking about:

One highlight of the Purity Ball is where fathers and daughters make a covenant with each other to live purely.

Many purity balls are attended by girls as young as six or eight.

A young girl walks down the aisle of a crowded church. She’s wearing a lovely white dress, and the pastor and her father are waiting up at the front… is she about to be married?  No, she is making a public commitment to courtship in this very wedding-like ceremony.

The article later clarifies that the girl in question is twelve. TWELVE.

From Treasures from a Shoe Box: 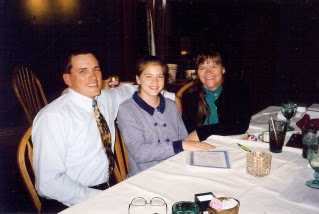 Stephanie and her younger sister Emily have both separately entered into a covenant with their Daddy that basically states that they will keep themselves pure for their husbands, obtain their father’s blessing on their courtship and will wait for Daddy’s full release before entering into marriage. In this Covenant, Terry agrees to protect them from unqualified men, teach them God’s principles of life, and pray for them and for God’s choice of their life partners.

Do you see the covenant on the table? They had her sign a piece of paper.

Parents, please don’t ask your daughters to make promises like this. People change. People grow up. People mature. No one remains frozen at 13, 14, or 17. If a girl wants to remain a virgin until marriage, she doesn’t need a fancy covenant or a promise to hold her to that, and if she happens to change her mind (as people do) she shouldn’t have to face shame or guilt or broken promises.

Life is a journey, and girls should be allowed to take that journey rather than simply be informed of the destination.