This is, quite simply, how I was introduced to the existence of gay people. I was only seven or eight at the time. And no, it wasn’t another kid who said this to me – it was an adult and a relative.

In contrast to this, a friend recently asked my preschool-age daughter Sally who she wants to marry when she grows up. She responded by stating emphatically that she plans to marry her friend Alice.

Bigotry – homophobia – is taught. It’s not something we’re born with.

The same, incidentally, is true of racism. I remember seeing a picture of a group of young children, black and white, walking hand in hand. The caption explained that the parents of the white children in the picture were deeply opposed to school desegregation, to the point of participating in angry protests, but that the children didn’t seem to mind their new schoolmates at all. For her part, Sally doesn’t even seem aware of race yet. She told me once that she was white, but then she told me that her friend was purple and I was blue.

Sexism, took, is not innate.

Homophobia, racism, sexism – these things aren’t natural and universal. They are taught.

November 15, 2012
How the Catholic Church Made Me a Progressive
Next Post 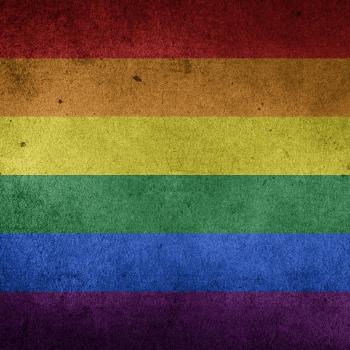