I’m Not Straight (And Other Discoveries)

In the conservative evangelical homeschool culture in which I grew up, things were simple and clear cut. There were men, and there were women. You grow up, you get married, you have kids. Men are attracted to women, and women are attracted to men. Men marry women, women marry men. The end.

Of course, I knew there was something else out there, that there were people who didn’t fit into this neat little paradigm. Those people were disordered. Or, that is what I was told. “There are some men who want to kiss on other men. Isn’t that gross?” I readily agreed. Perversion. Evil. The work of Satan.

There were many things I knew, as a child and teen. For instance, that sex is the most wonderful thing that you can imagine, but only between a husband and a wife. Or, that virginity is the most beautiful gift women have to give to their husbands. Or, that thinking sexual thoughts was dirty and sinful.

Puberty is only more difficult than usual for those who are, like I was, taught that thinking sexual thoughts is the moral equivalent of actually engaging in sexual intercourse, and that both are sinful.

Push the thoughts away. Don’t go there. Surely I can control my mind.

And as I found, I could.

And as time went by, I did.

I was pure. I was holy. I was protecting my virginity, both physical and emotional. Someday my prince would come riding, and I would present myself to him, pure and holy, a gift. Our marriage would be blessed by God because I’d kept myself pure. We would have a passel of children, be financially secure, and become one in body and in spirit. Oh, and our sex life would be out of this world.

And then I went to college. Little homeschooled evangelical girl with pigtails and jumpers, off to the big wide world of a university campus. It was there I found him. Sean. A young man with hopes and dreams for the future, a heart for fellow humans, and an openness and honesty that could not help but be appealing.

We started dating. I called it courtship.

While I was attracted to Sean’s personality, love for others, and intelligence, I was not sexually attracted to him. He seemed to think that was a problem. I didn’t. I felt no sexual attraction for anyone else, either. I had shoved my sexuality in a box, locked it up tight. He seemed worried. I wasn’t. I was keeping myself pure, avoiding sin.

Sean was fine with letting me set the physical boundaries in our relationship. We didn’t kiss, and even holding hands took me a while to become comfortable with. That wasn’t what worried him. It was a word. A possibility. Asexual.

Asexuality (sometimes referred to as nonsexuality), in its broadest sense, is the lack of sexual attraction to others or the lack of interest in sex.

Would my feelings change when we married? Would I suddenly find myself a sexual being? I thought yes. Sean feared no. He was concerned. But I knew better. I was merely keeping myself pure for my future husband. It was normal to be able to turn sexual thoughts and feelings off completely like that – a good thing, actually. Right?

Fearful, I took the lid off the box, wondering what I would find. Months went by. Gradually the feelings re-awoken. Gradually the urges came back. Sometimes slowly, sometimes quickly. And with relief, I found myself indeed sexually attracted to Sean. My relief was mirrored by his. I still believed in purity. I still viewed the world in binary. Grow up, marry someone of the opposite sex, have children, in that order. It’s just how things were.

That summer I married Sean.

But there was something else. When my sexuality came back from the grave into which I’d pushed it, it wasn’t always predictable. I’ve shared a bit of that before, but there’s more.

The time I suddenly had the urge to put my hand on my friend’s breast. The way my gaze would linger when an especially fit woman jogged by on the sidewalk. This thing about where a woman’s hips meet her waist.

I told myself it was just appreciation.

The time I almost leaned forward and kissed a friend while we were sitting close and watching TV. The way I could name more female actors I felt attracted to than male actors. This thing about women’s curves.

I told myself it was just appreciation.

When we had only been dating for a little while, Sean told me he was bi-curious. I cried. He protested. I yelled. He explained. I was afraid. I was disgusted. I felt sick inside. I came within a hair’s breadth of breaking up with him.

And now, here I was.

But I didn’t feel disordered, or sick, or twisted.

Somehow I had always imagined that people who were perverted and deceived by Satan would be able to feel the oppressive darkness with which they were surrounding themselves. I had been taught that they would feel dirty and miserable. The scum of the earth, crying out for help, in desperate need of salvation.

After telling myself for years that these feelings were just appreciation, or jealously for physical beauty, or anything other than what they were, I finally let go of the denial and admitted the truth to myself.

I am sexually attracted to women.

The reality, of course, is that without actually ever being with a woman it’s probably impossible for me to know. Being raised in the purity culture and the getting married to the first person I ever had a relationship with, there’s a lot I simply can’t know right now, and may never know. This is part of what kept me thinking in circles for so long. But what I finally realized is that I don’t have to fit my sexuality into any one label or box. There are men I find sexually attractive, and there are women I find sexually attractive. I don’t have to figure out a ratio or obsess over what label I should use.

There’s also the fact that I’m in a monogamous relationship with a man, so I don’t look anything but straight. I’ve long felt that I have no right to claim an identity that doesn’t concretely affect my life. I don’t have to worry about whether people will recognize Sean as my spouse, or whether he is legally permitted to make medical decisions for our children. But one thing I’ve realized is that humans’ sexuality is incredibly diverse, and that we need to move away from trying to force things into a binary or into neat boxes created by religion or culture. Admitting that I’m not straight is just one part of that. Whatever exactly I am, I’m not a fake. I’m me.

Everything may have been black and white growing up, but at some point the floor dropped out from under me and the world shattered into a rainbow of color. And you know what? The world is a much more complicated, interesting, and fascinating place than I had ever realized. The simple sexual binary I was raised on has proved itself false, and I’ve stopped worrying about fitting myself into it. There is no way I would ever go back.

December 3, 2012 My God, They Really Are the Same
Recent Comments
0 | Leave a Comment
Browse Our Archives
Related posts from Love, Joy, Feminism 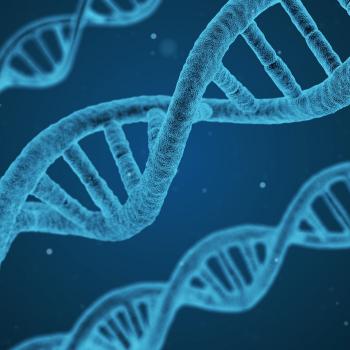