My name is Tracey and I write a blog describing my religious journey through local churches. In my blog surfing I became interested in the Elsie Dinsmore series, so I borrowed books 1 and 2 from the library. Functionally, I found them more like one long story than two, so I read them in succession. I would like to present an adult, outside (non-homeschooled non-evangelical) perspective on these first two books. The books I have read are, as far as I can tell, the original versions. They are called Elsie Dinsmore and Elsie’s Holidays at Roselands.

Let’s begin with a chapter by chapter look at the first part of book 1.

In chapter one we meet Elsie. She is a timid little thing with fragile emotions who seems really very put upon indeed. The other five kids in the house AND their private tutor torment Elsie constantly. Actually Elsie is the daughter of an elder brother to this sibling group. Her classmates are her aunts and uncles. Elsie’s mom (also named Elsie) and dad (Horace) getting married caused a big scandal for Horace’s family, because they wed so young. And something about Elsie Sr. having the wrong kind of wealth; it comes from trade. To deter the new marriage from blossoming, grandpa Dinsmore (Horace’s dad) sent his 17 year old married boy to the North and then to Europe. Eight years later he’s still there. Meanwhile, Elsie Sr. gave birth to Elsie Jr., then died of a broken heart a week later. So Elsie’s been stuck with the Dinsmore clan ever since with only her dear Mammy (her slave nurse) to raise and love her.

In this chapter we also meet Arthur, Elsie’s chief tormentor. And we meet Rose Allison, a family friend from the North that we learn is Christian just like Elsie! They talk about God and Jesus for awhile and the chapter ends on a happy note. I found it striking that the character I was drawn to most was the justice-loving Lora, the only one of the siblings that doesn’t treat Elsie like trash. I really don’t relate to Elsie, she’s such a little mouse.

Chapter 2—“jes de same as if I was white”

In chapter 2 we get to meet Mammy, and immediately a few questions spring to mind:

The other important thing that happens in chapter 2 is an incident with Arthur. He asks (demands) Elsie to loan him money to buy a splendid little toy ship he wants. Elsie says she’s going to think about it and he calls her stingy. Then she buys it for him outright. In return he stops teasing her. For a while. So I guess the price of kindness is a sailboat.

This chapter introduces Elsie’s dad who finally returns home from Europe and Mr. Travilla, a friend of his since boyhood. On their very first meeting Elsie chokes, finding herself unable to run up to her father and just give him a hug. Her father remarks how terrified she seems and she flees the scene sobbing. Get used to this folks because this is how their dynamic persists for a long while yet. Also get used to the sobbing. Elsie cries for maybe 80% of the time.

Mr. Travilla is an interesting character who immediately takes a liking to Elsie. It is in this chapter that he first suggests he wants her as his own daughter. I know those of you who have read the entire series will find this particularly strange given their adult relationship later.

Elsie and her father continue in this newly established pattern of him disapproving of nearly everything she does and of her responding with tears and attempts to not be “naughty”. It is noticeable that not only is Elsie in agony over having displeased her papa, she is in agony that by doing so she is being wicked, which displeases Jesus. Never mind that Papa’s orders are arbitrary, closed to questions and sometimes given after the event.

The whole rattlesnake incident pisses me off too. Horace tells Elsie never to go into this large meadow on their grounds.

“Because I forbid it,” he responds.

Okay, there’s a giant rattlesnake down in the meadow. Elsie is eight and she’s old enough to understand what that means. Heck, telling her would probably help her remember the warning better, so she wouldn’t get into trouble. But Horace has to control Elsie in every way so he forbids the questioning of any command, and then punishes Elsie when she forgets and goes in the meadow. Then the author holds up the finding subsequent and killing of that snake as proof Horace was right to keep his daughter in the dark. After all, he was only doing it for her protection. I find myself wondering who this author was and why she was writing.

The other thing about this chapter is the weirdest scene in the book so far: Papa takes Elsie on a visit to Mr. Travilla’s house. After dinner Travilla finds Elsie reading in the library. He tells her to put away her book, but Elsie just wants to finish the book before Papa takes her home. Travilla responds, “He is not to take you away. I have made a bargain with him to let me keep you . . . call me papa in the future.” This freaks Elsie out immensely and she runs crying to her dad. At this point, if it were me I’d run too, but not to the dad who I barely know. It’s obvious this is some weird joke that only Travilla is in on, and no one else found funny. What possesses Travilla to do this? No idea. I did not know what to make of this part. I assume it’s just more “biological father = true father” crap.

This chapter mostly focuses on another incident with Arthur in which a watch belonging to grandpa Dinsmore is found broken. They hold a short trial/interrogation in a room of the house and evidence is given and witnesses questioned. Arthur, cast as the villain, is of course to blame. Elsie is the key witness and fears Arthur will plot revenge. Papa happens to be on Elsie’s side at the moment, so he tells her, “Don’t be frightened daughter. I will protect you.” All well and good until . . .

Chapter 6—Nope you are naughty

Elsie somehow does wrong again and her father shuts her out again. This time it’s because she loosed a hummingbird he had trapped under glass (hello, it could die in minutes in there) thinking it was Arthur’s doing. She is punished for not being able to read Horace’s mind. Also, who collects hummingbirds?

Elsie still hasn’t learned divination or how to be a stepford child. She fails a single lesson at school and Horace makes her have bread and water for dinner. You know, it’s really getting remarkable how much of this book is dramatic dialogue. So much “Oh Papa!” and “You cry too much” and “I am terribly naughty.” Stop writing the whines and can we please get back to some story already?

So this whole business with the school workbook is something of a turning point in the story. Elsie manages to write cleanly and legibly for a month in her school workbook. She can’t wait to have Papa see that she isn’t naughty after all! Unbeknownst to her, Arthur has found the workbook and surreptitiously stained and written in it to make it appear messy. The work is so sloppy, (and Horace is such a maniac) that Horace decides to really punish Elsie. He drags her by the arm into his room and picks up a horsewhip. Just then Lora rushes in, just in time to save Elsie from a beating she didn’t deserve! Lora says that Elsie’s workbook is always neat and she wouldn’t lie about not knowing the scribbles were there. Horace immediately believes Lora (for some reason) where he did not believe Elsie a moment ago. He calls Elsie “My darling, my own precious child!” and apparently he’s pretty upset that he almost beat her half to death for no reason.

He begins to treat Elsie with tooth-decaying affection, spending most of his spare time with her. He lavishes epithets of love on her and scolds anyone who mistreats her. So of course this means Arthur gets what’s coming to him about the notebook. Now that Elsie is in her father’s good graces, what could go wrong?

Tracey blogs at The Church Project. 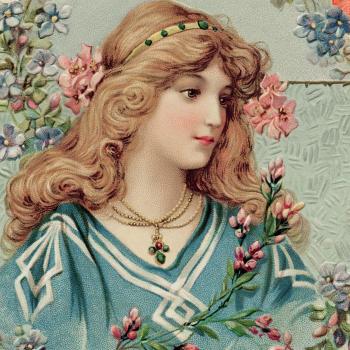 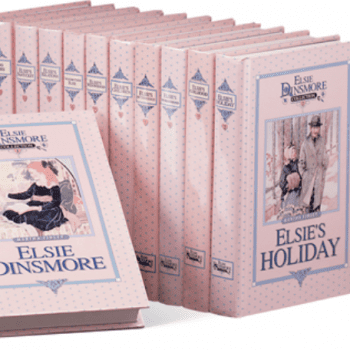 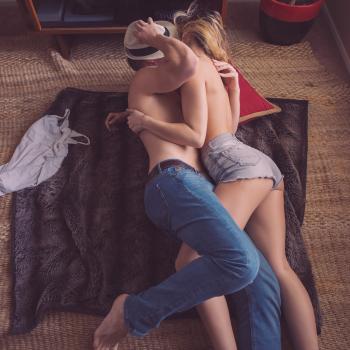