Christian Movie War Room: You Can Fix Your Abusive Husband through Prayer

I have yet to see the Christian movie of the hour, War Room, but I’ve been reading reviews and they’ve only made me increasingly uncomfortable. The movie centers on wise elderly Miss Clara’s tutelage of Elizabeth, a real estate agent with a troubled marriage whom she takes under her wing. And if you thought the relationship messages in Fireproof were bad enough—the husband, Caleb, is abusive, but nobody calls him out as such—the ones taught in War Room are, by all reports, only worse.

Check out this review, for example:

[T]he flick has a potentially dangerous “remedy” to domestic abuse (which can be just as damaging when in psychological mode as its physical counterpart). According to Miss Clara, it’s not up to Elizabeth to change or judge her husband, regardless of his behavior. Instead, she should respect, love, forgive, and pray for him, and let God do the rest. That’s all fine and dandy, but there are plenty of religious wives (and children) who’ve eventually been beaten and even killed by abusive husbands/fathers despite all of the prayers in the world.

Or this review from the Guardian:

Is your husband a self-centered jerk? Does he ignore your needs, pay no attention to your adorable daughter, scold you for giving financial help to your troubled sister? Does he have a wandering eye and come dangerously close to committing adultery? Is he embezzling from his job? Well, you should know that it’s all your fault. When you find his behavior upsetting and take him to task you are only protracting the struggle. What you need to do is surrender, go in the closet and pray.

But perhaps the most hard-hitting review is one titled Box-Office Hit War Room Made Me Shake with Rage, by Ijeoma Oluo:

Through the power of prayer, and learning never to criticize or yell or do anything other than smile meekly at her lying, cheating, selfish, abusive husband, Elizabeth is finally rewarded with the husband she deserves. No, not a new husband with no history of treating her like shit, but the same shitty husband, who has magically become non-shitty and suddenly gives her foot rubs and makes her ice-cream sundaes.

After everything in Elizabeth and Tony’s marriage is fixed by Jesus, Miss Clara demands that Elizabeth find a young woman to badger into praying all her problems away, so that all young wives can submit to their husbands and stop nagging them all the damn time to stop abusing them and cheating on them.

For several years, I wrote a review series of Debi Pearl’s book, Created To Be His Help Meet. In that book, Debi told her readers exactly this—that the key to getting a good, loving, caring husband is to never criticize and never talk back. But given that Debi is fairly extreme in her teachings, most of you probably assumed she was pretty fringe. And if you did, you’d be right. She is pretty fringe.

But you know what isn’t fringe? The idea that the Christian women can fix their marriages—nay, their abusive husbands—through quiet submission and obedience. The idea comes from the following Bible passage, and is widespread among evangelicals and fundamentalists.

I Peter 3:1-2—In the same way, you wives, be submissive to your own husbands so that even if any of them are disobedient to the word, they may be won without a word by the behavior of their wives, as they observe your chaste and respectful behavior.

This verse is bad enough as it is—you would think communication would be important to any marriage—but it gets worse when you realize that evangelicals and fundamentalists tend to apply it not only to marriages with unsaved husbands but also to marriages with abusive husbands.

I’ll let Oluo explain why this is such a big problem:

Miss Clara is a pusher—as bad as any drug dealer on the street. Miss Clara pushes Christianity instead of crack. Not just any Christianity, the type of Christianity that keeps women in abusive relationships, that keeps them locked in misery—that makes the humiliation, degradation, and hate they endure somehow their fault.

This kills women. Miss Clara kills women. This movie, it intends to kill women by keeping them in harmful and life-threatening situations by promising that if they just endure long enough, they will be rewarded with a husband who no longer wants to crush their spirit or their skulls.

This movie, which is currently the second-highest-grossing movie in America, intends to see children grow up watching their mothers be abused, disrespected, defeated—not only by their fathers, but by their faith. Right now, as you read this, a woman is dying because she cannot leave her abusive partner. Right now, a man is acting on the belief that he has the divine right to treat his partner like shit because God says she should submit to him.

This movie should offend any person, especially any Christian, who believes that God is a loving God. This is not what love looks like. And this is not what faith looks like. If any movie could make one lose faith in God, this would be it.

I honestly couldn’t have said it any better myself.

September 16, 2015 Doug Wilson: Steven Sitler Is Not a Child Rapist
Recent Comments
0 | Leave a Comment
Browse Our Archives
get the latest from
Nonreligious
Sign up for our newsletter
POPULAR AT PATHEOS Nonreligious
1 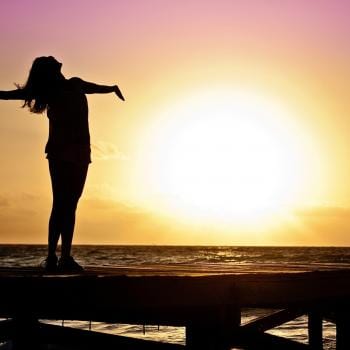 Nonreligious
The Vision: NASA Is On the Case
Love, Joy, Feminism
TRENDING AT PATHEOS Nonreligious