Doug Wilson: Steven Sitler Is Not a Child Rapist

Remember last May when the Duggar parents gave an interview in which they noted numerous times that their son, Josh, had only molested his sisters over their clothes (except for that one time when it was under, but only for a few seconds)? “This was not rape or anything like that,” they insisted in an obvious effort to minimize what Josh had done. Well, Doug Wilson took a page out of their playbook last week when he wrote the following:

The twittermob has been circulating numerous untruths, among them that Steven Sitler is a child rapist. He was actually convicted of one count of Lewd Conduct with a Minor under 16 years of age (Idaho Code 18-1508).

Because it’s apparently important—very important—to clarify that Sitler is not a child rapist. I mean all he was convicted of is one count of Lewd Conduct with a Minor under 16 years of age, for god’s sake! It’s not like he—wait, what exactly did he do?

Wilson is nothing if not dishonest.

Second, as Wilson well knows, Sitler may have been convicted of only one count, but the offense he was caught on and sentenced for was in no ways his first or only offense. But of course, what really matters is that Sitler was only “actually convicted” of one count. Because you know, apparently it only counts if the vicim’s family is willing to see it through the court of law.

That thing I said about dishonesty? Yeah, that.

And what exactly did Sitler do? Homeschoolers Anonymous provides a letter a parent wrote to the judge outlining a specific instance of sexual assault carried out by Sitler on their two-year-old daughter. If you are triggered by descriptions of child sexual abuse, you may want to stop reading this post here. 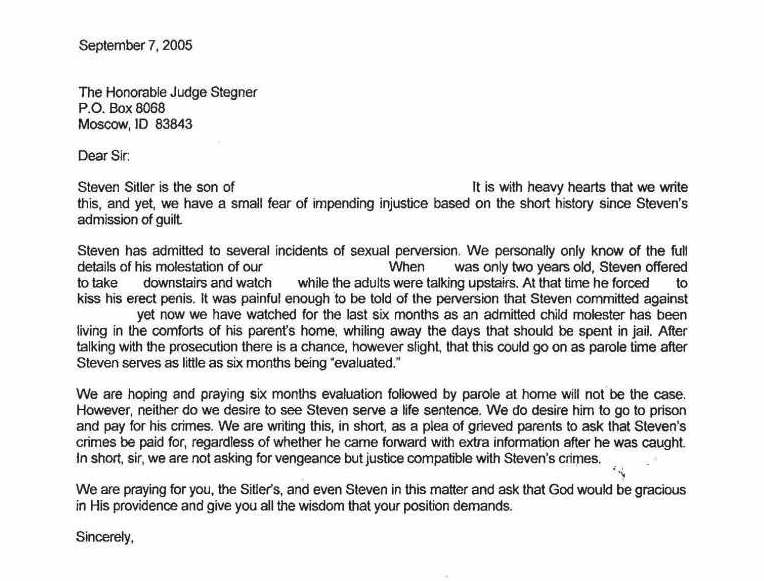 Because I studied logic using Wilson’s homeschool textbooks as a child, I’m going to put together a logical syllogism to parse what Wilson is saying here.

Wilson says Sitler is not a child rapist

Therefore, Wilson does not think forcing a child to perform oral sex is rape

Perhaps realizing how bad what he said was, Wilson added this:

Important clarification: When I say above that Steven was convicted of one count, I was not meaning that this was his only offense, and neither was I seeking to minimize the egregiousness of his behavior in those other instances. That is why I argued, just below this, that the father in Texas who killed the molester he walked in on was fully justified. I should have made my meaning more clear than I did, which I could have done by putting the Texas paragraph first, and linking it expressly to Steven’s offenses. My apologies to any friends who missed my meaning here, and who thought I was trying to trim and be cute on Steven’s behalf. Such a misreading would be my responsibility. I believe there was at least one scenario where Steven could have been killed on the spot, and no injustice done.

I’m pretty sure this is the first time I’ve ever seen Wilson take responsibility for, well, anything, but note what he doesn’t do—take back what he said. While he regrets the order in which he wrote his post, he appears to still stand by his statement that Sitler was not a child rapist. This suggests to me that Wilson may not understand very basic things like how the word “rape” is defined.

And frankly, the Duggars had the same problem in all of their justifications for how they handled their son Josh’s actions—it wasn’t like he raped his sisters, so why were people so upset? This whole “it wasn’t rape” defense for individuals who molest children really needs to be discontinued. There is more to sexual abuse than rape. At its core, these sorts of justifications betray a fundamental lack of understanding of sexual abuse, and how it works.

For those wondering about Wilson’s statement that “there was at least one scenario where Steven could have been killed on the spot, and no injustice done,” I’ll just mention that Wilson has attempted to reconcile his past writing that child molesters should be executed with the way he has handled Sitler’s case by arguing that child molesters should be executed, but that we don’t live in a biblical theocracy yet so we have to work within the laws we have, and besides, being sentenced to life in prison is a sort of execution from which the court can choose to “resurrect” a person. How Wilson reconciles his statement that Sitler’s crime would merit execution in the perfect biblical theocracy with his letter to the judge asking that Sitler’s sentence be “measured and limited” I have utterly no idea.

September 15, 2015
Christian Movie War Room: You Can Fix Your Abusive Husband through Prayer
Next Post