Island of Aquarius: Lots and Lots of Explosives

I’m going to start by taking us back a moment, because I skimmed over so much last week. Here’s a bit from the argument between Kelno and his followers, before some of his followers (“the faithful twenty-seven”) leave him to follow The Real MacKenzie and the Coopers:

“Silence!” shouted Kelno. “Silence! I am lord here! You will do as I say!”

“Then stop the earthquakes,” an elderly man shouted.

“Who said that?” Kelno demand angrily, looking over the crowd.

“Yeah, you said the quaking would stop. Well, it hasn’t,” said a housewife.

“Hey, I’m a geologist, and I think MacKenzie’s right,” said a well-dressed man.

Peretti’s fascination with Kelno’s followers’ former careers—well, only the men’s—is fascinating. He’s all, accountant, business executive, college professor. And here we have a geologist. I’d really love to hear this geologist’s opinion on the absolutely impossible geology going on here, but I know we won’t get it.

Last week, those who chose to leave Kelno followed MacKenzie and the Coopers into the snake-inhabited volcanic vent in the sacrificial pit and through the volcanic tubes in the island, to the cavern where MacKenzie’s makeshift boat rests—only to find that the way out—the tunnel that opens at low tide—is now permanently under water. This is a problem.

The Dude and Lila, rowing in his canoe toward that same tunnel from the outside, have just realized the same thing.

Candle threw back his head and screamed—a mournful, anguished sound. He held his head in his hands, he trembled, he shook his head, he screamed again.

Meanwhile, inside the cavern, everyone has crowded onto the handmade boat—but they have nowhere to go.

Adam shined his flashlight straight up, and the rough, black-rock ceiling was pressing steadily downward like a descending cloud.

Dr. Cooper agreed. “The air pressure is increasing. The lava vent must be sealed up now. The water’s coming in, but the air can’t get out.

Regardless, this is a bad bad situation.

Candle and Lila pulled on the paddles for all they were worth, and the canoe fought its way through the waves and out away from the island’s crumbling, muddy mass. They had to get clear before they were sucked down, gobbled up by the churning sea. Candle was frantic and babbling, not knowing what to do next.

Suddenly there was a crash, and Lila and Candle jumped with a start. From nowhere, a large chip of volcanic rock fell into the canoe, smashed a case of canned goods, and broke into two jagged halves that came to rest at the bottom of the canoe.

From nowhere? It’s not like this thing is erupting!

I had to update my picture. I had to. 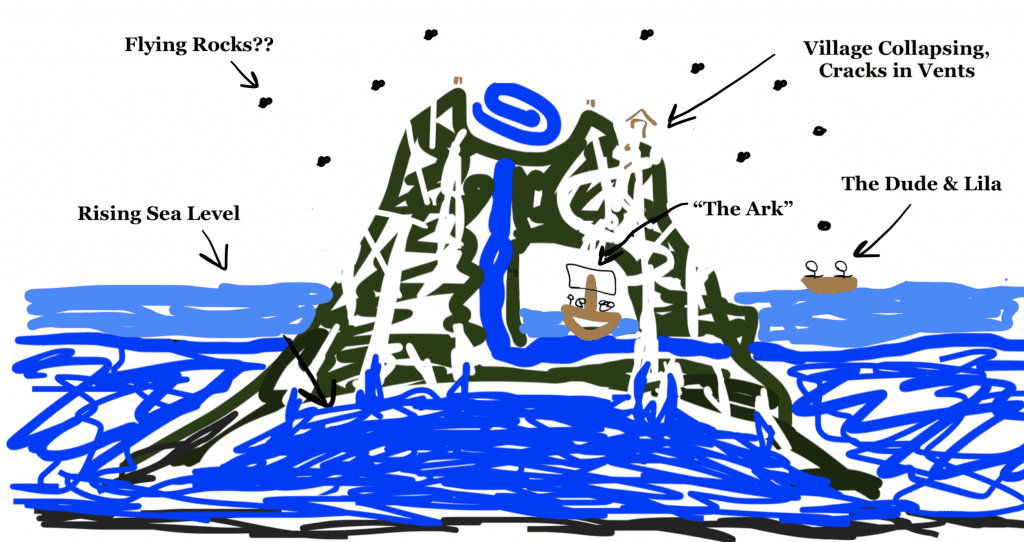 Okay. So, what happens next?

Lila looks at the rock and realizes it’s volcanic rock—“light and brittle”—and suddenly has an idea.

“C’mon, let’s row!” she shouted. “We’ve got to get back to your supply hut before it sinks!”

Okay I have a question. If the abandoned village was already partially submerged the day the Coopers were supposed to leave the island—before all this additional quaking and sinking (those in “The Ark” can see the ceiling descending above them, for crying out loud), shouldn’t it be sunk by now?

They get back to The Dude’s supply hut in the half-submerged village, and Lila grabs all of the plastic explosives—the ones The Dude thought were muffins and tried to eat—along with the detonators, and an “emergency” oxygen tank and mouth piece.

Meanwhile, in cavern, the men Kelno sent after MacKenzie, Jay, Dr. Cooper, and “the faithful twenty-seven” have realized that they’re trapped: “the lava vent they had followed to get here was now completely blocked.” Maybe it caved in? I would totally buy that, it’s just that thus far, the emphasis has all been on cracks, and the lava vents didn’t collapse on them before.

Since they have nowhere to go, these formerly brave fighters freak out and join everyone else on the boat. MacKenzie sets about making sure everyone is properly saved and ready to meet their maker. (Because that’s what they’re assuming is next.) Like really though—there are whole big “let’s make everyone’s right with the Lord” moments going on here. And everyone is terrified and freaking out, so they all buy in.

Lila has The Dude draw her a diagram.

As Lila continued counting detonators and wads of explosive, Candle stopped and scratched out a diagram in the dirt. She then studied it carefully.

“That wall there—” she said, pointing. “The wall, the one between the whirlpool and the cavern … How thick is it? How much rock?”

The Dude says the wall is very thick, and I’m realizing a possible problem with my own diagram. Is the whirlpool supposed to be right next to the cavern? 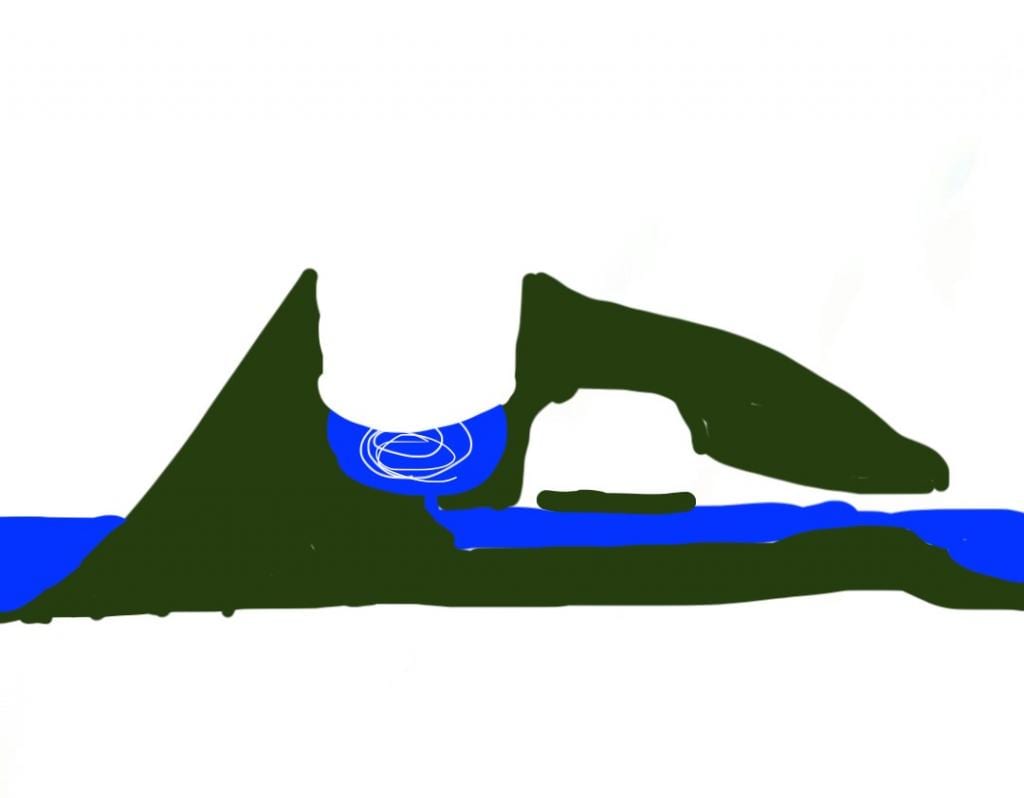 See? The whirlpool is next to the cavern. Okay! Works for me!

Anyway, Lila sends The Dude to make sure the canoe doesn’t float away, and takes that opportunity to give him the slip. She grabs the explosives, the emergency oxygen bottle with mouthpiece, and takes off for the whirlpool. 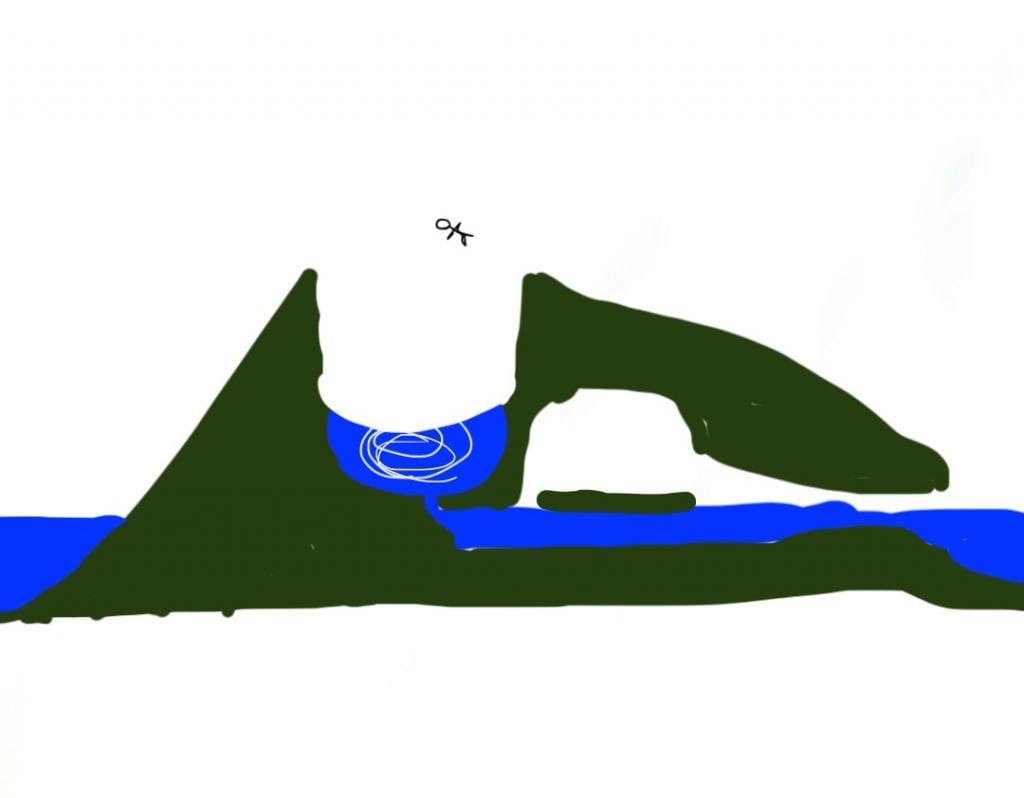 No, really! Lila takes a running start, and jumps off the cliff, falling through the air and hitting the surface of the whirlpool like solid marble.

Oh, and remember—by this time the water is actually higher. 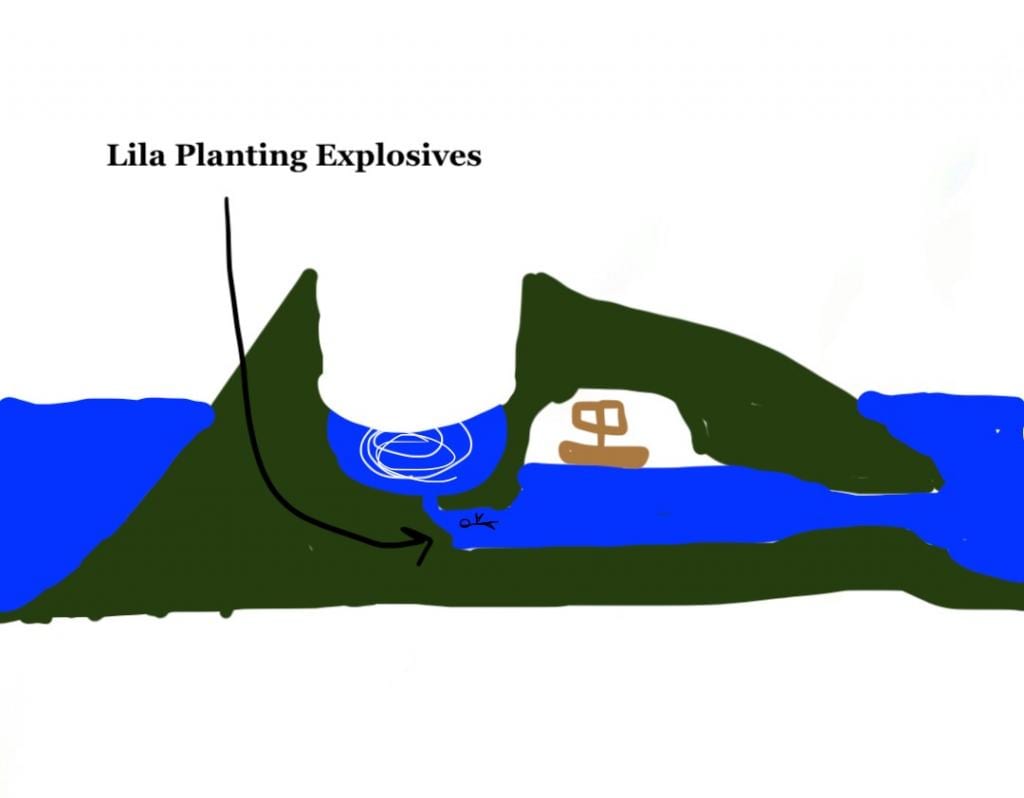 Yeah, so, that’s the plan. She jumps in the whirlpool, gets sucked under, finds herself under rock, and figures that’s the time to start planting the explosives.

She jammed the wad into a crack in the rock, attached a detonator, and set the timer for five minutes, then turned a small timer on her wrist to five minutes. She let the current carry her a few more feet until she grabbed onto the rocks again and planted another wad and detonator.

Oh yes, this is perfectly safe for a 13-year-old.

Meanwhile … we get a glimpse into Kelno’s mind.

Stuart Kelno remained near his cottage, no longer able to control his people. He figured there was nothing to do now but wait for this horrible shaking to stop—oh, and it would stop, he was sure—so the rebuilding could start.

But then he heard a loud snap and the swish of palm branches through the air, and looked just in time to see a huge palm tree flop down on his cottage, cutting it neatly in half. Wood, glass, idols, and books flew everywhere. How could this be? A tree falling on the house of a god? Suddenly Kelno began to feel small and helpless; if he was a god or if he did have divine control over the forces of this island … it was getting harder and harder to believe it.

So apparently Kelno actually believes it all?! I’d taken him for a con man and was trying to figure out his long game, with the earthquakes getting worse. Yikes. He actually thought he was a god, with divine control over natural forces? Well. I suppose that is one type of cult leader. The delusional.

He looked this way and that. His followers were scattering in all directions. No one was watching him. A thought occurred to him. Perhaps the missionary was right all along. Perhaps there was still some room on that boat of his.

Kelno heads for the pit, figuring he can climb through those vents alone, into the cavern, which, what. Has literally no one read about Theseus?

Meanwhile, Lila ran into a problem. While planting explosives, a slab of rock broke off, fell slowly down through the water, and pinned Lila to the bottom.

Oh by the way, The Dude is running around the jungle yelling for Lila, so maybe she should have actually told him where she was going.

Anyway. Lila’s leg is pinned, and the detonators she set on all those explosives are about to start expiring—in a bad way:

Lila’s lungs were empty. She sucked on the mouthpiece, but there was nothing left. The oxygen had run out!

Twenty seconds. Lila tore a small corner off one of the plastic charges, jammed a detonator into it, found a niche in the slab that looked promising, and set the detonator for five seconds.

She then stretched her body as far away from that charge as she could, wrapped her arms around her head and over her ears, and waited.

It was like she’d been hit by an underwater freight train. The sound was deafening, the concussion stunning; the blast rattled her teeth.

She was shooting through the murky water like a torpedo, surrounded by foaming, roaring bubbles and pulverized rock. She was tumbling, her body limp, half-conscious, end over end.

She couldn’t feel her leg. Had she blow it off?

Only ten seconds left. She could feel the pressure of the water easing. She was approaching the surface, but where?

Her head broke through into beautiful, delicious, God-given air! She gasped it down and started swimming. Now she could feel her left leg. Praise God—it was still there, but it wasn’t working. Dull, agonizing pain shot through it. She’d broken something, maybe a lot of things.

Lila finds a rocky ledge—whatever was left to climb onto in the fast-filling cavern she’s come un in, the same cavern with the boat.

Here’s what happens next. 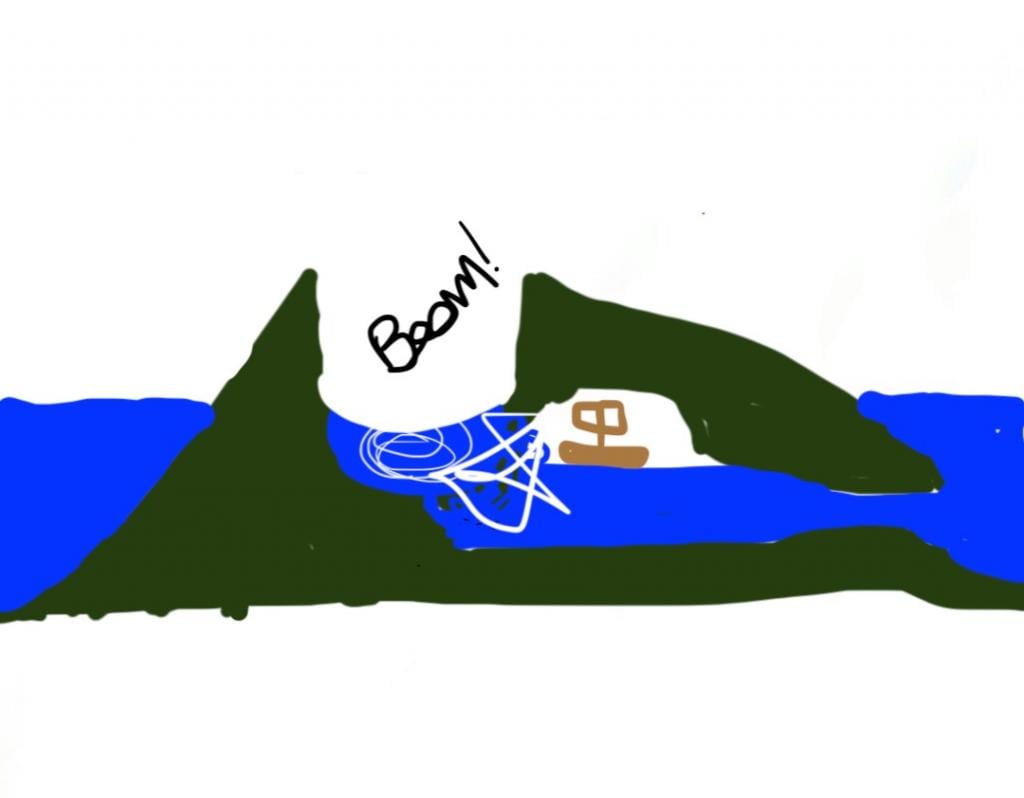 July 15, 2020
Child Protection Must Include a Theology that Empowers Children
Next Post 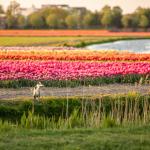 July 19, 2020 Lesbian Duplex 281: An Open Thread
Recent Comments
0 | Leave a Comment
Browse Our Archives
get the latest from
Love, Joy, Feminism
Sign up for our newsletter
POPULAR AT PATHEOS Nonreligious
1 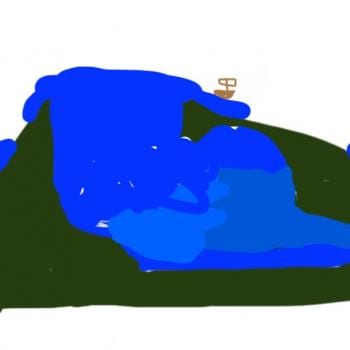 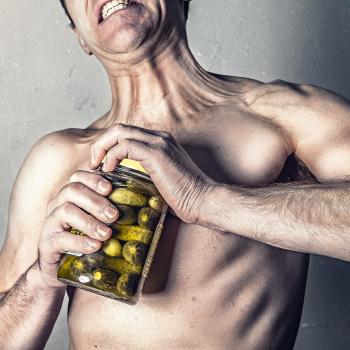 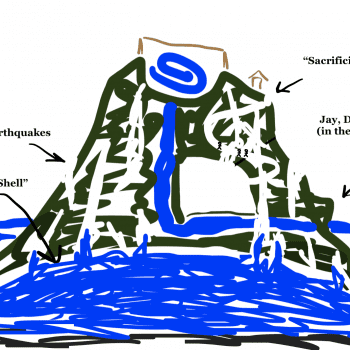 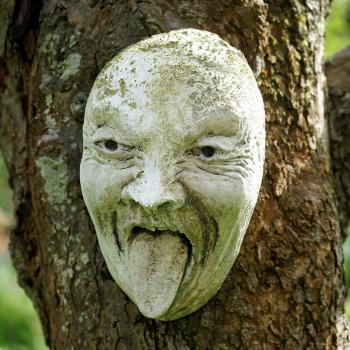