Child Protection Must Include a Theology that Empowers Children

Child Protection Must Include a Theology that Empowers Children July 15, 2020 Libby Anne

The scandal at Menlo Church continues:

The leaders of a California evangelical megachurch are under fire for bungling the church’s response to a youth ministry volunteer’s confession that he was attracted to minors.

The Menlo Church volunteer in question first told Senior Pastor John Ortberg about his feelings two years ago, though congregants weren’t officially notified about the situation until January. That the volunteer was the pastor’s younger son, John “Johnny” Ortberg III, was kept secret until a whistleblower leaked the news late last month.

The younger Ortberg denies acting inappropriately towards children and to date, no one has come forward with allegations claiming otherwise. But the revelation of his identity has heightened scrutiny of the church’s response and raised questions about whether John Ortberg ― who allowed his son to continue volunteering with children for over a year after hearing about the disordered attractions ― should remain the church’s senior pastor.

Some parishioners are pointing out—and rightly so—that the board of elders seems to have been more interested in protecting John Ortberg’s reputation than in protecting the safety children.

Marci Hamilton, CEO of the child abuse prevention think tank Child USA, laid out some of the substantial inadequacies of Alvarez’ investigation in the article I quoted from above. In reading her comments—which I’ll quote here—one particular statement struck me as being incredibly, deeply important:

Hamilton said she found it “rather shocking” that the investigator failed to interview Johnny Ortberg and parents whose children had been with the volunteer. She also found it surprising that Johnny Ortberg wasn’t identified by name to the congregation and his sports team.

Adults sexually attracted to children often operate in ways that are under the radar, Hamilton said, which means the interview process needed to be expanded. The investigator needed to learn if Johnny Ortberg was allowed to be alone with children, if he engaged in grooming behavior, and if his computer was searched for child sex abuse images and direct contact with children. Investigators also need to examine the extent to which children at the church are taught to “obey” adults, which could contribute to kids’ hesitation to report abuse, Hamilton said.

“The ‘investigation’ fell so far below the minimum efforts needed to ensure children haven’t been abused that I wouldn’t call it an investigation,” Hamilton wrote in an email.

Hamilton is right about all of these factors, of course, but note this particular aspect—to what extent are children at the church taught to “obey” adults? Hamilton asks.

I grew up in an evangelical megachurch, and “children obey your parents” was held up as the single most important thing children needed to know. And it wasn’t just parents. Children were taught to obey adults and to not question authority figures. Obedience was central, and usually unqualified.

Hamilton’s comment struck me because it’s not something I’ve seen much discussed, in the response to the situation at Menlo Church. Evangelical communities frequently do seemingly everything possible to put children in danger of abuse, while claiming simultaneously to care deeply about children. I’m reminded of fundamentalist child rearing guru Debi Pearl, who wrote a a children’s book about preventing child sexual abuse and who who at the same time teaches parents to whip their children until they break their children’s wills, to ensure that their children will obey them without question and never, ever question them.

Keeping children safe must go hand in hand with empowering children to speak up when something goes wrong, to advocate for themselves, to believe themselves worth advocating for. If children’s history of speaking up for themselves is paired with punishment for “back talk,” they will learn that they not only cannot speak out, but also that the adults in their lives are not interested in listening to them and will not hear them even if they try to speak out.

These are bad and dangerous messages to send children, but they are nevertheless extremely common messages, in evangelical churches.

For instance, have a look at this article, on an evangelical website John Ortberg also writes for:

Child sexual abuse is almost always perpetrated by a family member or close family friend, and not by a stranger. Teaching children that the first and most important thing they owe their parents is immediate, unthinking, unquestioning obedience is not a good thing.

I have yet to see many evangelicals fully aware of the connection between teaching children that their duty to God includes unquestioning obedience to parents and other adult authority figures, and leaving children vulnerable to sexual abuse. I am glad Hamilton brought up this connection, and I hope her comments spur Menlo Church to think about the impacts of its theology on its ability to protect the church’s children. 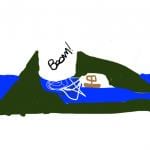