One of the marks of the Right Wing Herd of Independent Thinkers is its lockstep conformity in believing any lie their folk heroes tell them while being Deeply Skeptical of what Normals call “actual journalism” but they reactively declare to be “Fake News”.  Case in point: 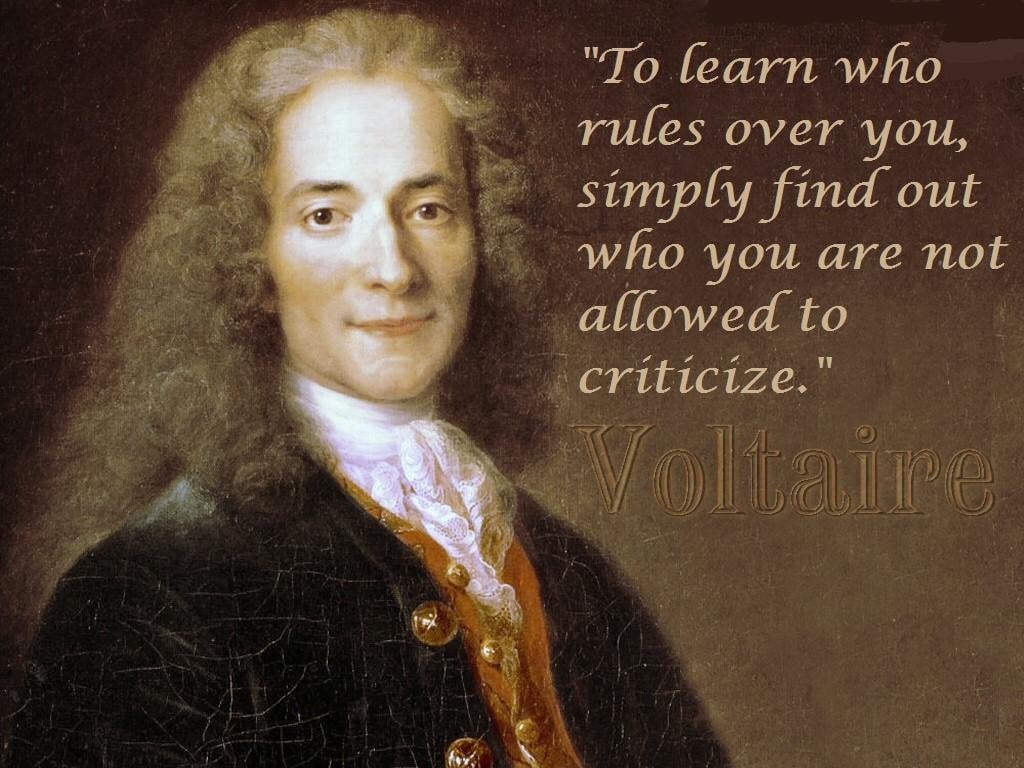 This meme has been endlessly circulated by Alt Right and MAGA Big Brains who think it is profound to shout “YOU ARE NOT THE BOSS OF ME!!!” at anybody who demands they do their homework or think thoughts that make them uncomfortable as they screw on their red hats and march off to another Nuremburg Rally to chant the praises of the Dear Leader.

Here’s the problem.  First, Voltaire never said it, something you’d know if you had the guts to stick your head out of your mental bubble, O MAGA Cultist.  Who did say it?  We will get to that in a moment.  But more important is that even if Voltaire had said it, people who were able to think and not simply parrot words would be able to say, “Wait! That is idiotic, whoever said it!” because people who can think are capable of analyzing bunk and do not slavishly repeat nonsense as Eternal Truth simply because a meme attributes it to Famous Person X.

Here’s reality: some people should not be criticized, not because they rule over you, but because they are innocent victims and you are a dick who thinks you are daring for adding to their suffering.

The people who pass this garbage around, whoever they attribute it to, prove every day that nobody should trust their judgment or believe a word they say.

February 19, 2020 The illusion of the conservative white American Christian majority
Recent Comments
0 | Leave a Comment
Browse Our Archives
get the latest from
Catholic
Sign up for our newsletter
POPULAR AT PATHEOS Catholic
1

Pope Francis Did NOT Say EWTN...
Biblical Evidence for Catholicism
Related posts from Catholic and Enjoying It!

Catholic
George Will and the Millstone of MAGA Christianity
Catholic and Enjoying It!

Catholic
The Bilko Party
Catholic and Enjoying It!

Catholic
The Massive Failure of the "Prolife" MAGA Cult
Catholic and Enjoying It!

Catholic
What has the "Prolife" MAGA Cult achieved?
Catholic and Enjoying It!
TRENDING AT PATHEOS Catholic