Hekate, Who Works Her Will

Deep in trance Hekate appeared before me. I’m always delighted and honored when Hekate appears to me. As a devotee of hers in my personal practice, I have found this is not always the case. She usually appears to me, bestowing revelations yet speaking in very few but very powerful yet stoic words. Then she stands back. She tends to be more in the background of my life since she first came to me, often feeling very distant and far off compared to other gods, though always willing to answer a petition or prayer. She will appear at an appropriate time, presenting a lesson which is often in the form of some sort of trial or test and then stand back until I’m done, sometimes for months. I have come to believe that this is why her name is Hekate, as one of the theories of her name is that it is translated as “she that operates from afar”. If this is not her true etymology, I have found that it is nevertheless true in my experience. She does not coddle, she does not direct, she does not even give her opinion, she presents options (or crossroads so to speak) and allows room for your decision. I see this as a form of great respect for one’s free will being reciprocated, and completely antithetical to the patriarchal deity I was raised with.

So there I am, the towering Titaness before me when suddenly I realize that I’m in my father’s previous house. The house was once my grandmother’s who unofficially left it to my cousin and moved out. My cousin was a drug addict and had destroyed the house and couldn’t pay the rent anymore. The landlord was furious and threatening to sue my grandmother over it, whose name was still on the lease. My father, with his deep compassion, took over the rent and signed the lease over to himself, promising to repair the house. I stared at the floors of which the carpet was completely ripped out since it was damaged beyond repair. I began thinking about how much my life had changed since I lived there and how many major life decisions I had made in this house.

Before I knew it I was back further in my past as a child at my grandfather’s house. My grandfather was a pretty strict man, to put it lightly and a pretty abusive man to put it bluntly. There were many times when he would lock me in my room without electricity for days and more times than that to which he would beat me with the metal part of his thick leather belt – usually over some petty thing such as forgetting to address him as “sir”. Of course this never amounted to the verbal and psychological lashings which began to become a norm. This was around the time I was 7 or 8 and had just discovered the very first tastes of witchcraft. After a while I began running out to the local park which was my escape. No one went to this park since it was in an elderly community and was full of overgrown trees, but to me it was sanctuary.

My grandfather, who had taken custody of my brother and I from foster care would often threaten me with calling my social worker and sending me back, which terrified me more than his anger. The scene I was seeing play out was that of the last time he threatened calling my social worker after returning from the park after he had beaten me with his belt. But in this vision I saw a crossroads appear beneath the child version of myself and my grandfather in his recliner. I saw a light above the child version of myself, which I identified in my vision as my Higher Self. I saw the light send down a beam through my child body and me stating with full confidence and tears in my eyes, “do it.” I had a realization that this was a small act of me coming into alignment with my will. Not just my personal will or ego will, but an alignment with my Higher Will or True Will. It was this decision that would eventually lead me to living with my father in High School.

It is at this point that I watched Hekate take the hand of my child self and walk it down a path. Hekate showed me other times where seemingly random decisions have put me on the path that I am on now. Most of all she showed me how she was there in the background revealing paths and taking me down the path I had chosen. When she was done showing me these things and conveying the importance of the decisions I’ve made the surroundings turned into a black void. Hekate the Titaness stepped forward. As she did so two other “Hekates” were revealed behind her, fulfilling a tri-form that is not uncommon for her. Both as equally towering in stature. Each one lifted her chiton to reveal one of the three fates underneath with their part of a thread. My thread was measured out and shown to me. In the vision I was a Christian youth pastor and fairly successful with a much more comfortable and privileged life. However, Hekate kept interfering, changing the color of the thread at various parts of it until I saw my life as it is now.

This baffled me a bit. The fates in Greek mythology had a power that seemed to exceed the grasp of the gods themselves. Often in myths the gods would petition or beg the fates but in the end could not change their decision. But here was Hekate in this vision changing their decisions without any effort. Then I remembered a part from Hesiod’s Theogony, which made me think that perhaps she has more power than even the fates themselves, as Zeus the king of the gods honors no god or goddess as greatly as he does her and also mentions how much she can change the fate of those she chooses:

“Also she bore Asteria of happy name, whom Perses once led to his great house to be called his dear wife. And she conceived and bore Hecate whom Zeus the son of Cronos honored above all. He gave her splendid gifts, to have a share of the earth and the unfruitful sea. She received honor also in starry heaven, and is honored exceedingly by the deathless gods. For to this day, whenever any one of men on earth offers rich sacrifices and prays for favor according to custom, he calls upon Hecate. Great honor comes full easily to him whose prayers the goddess receives favorably, and she bestows wealth upon him; for the power surely is with her. For as many as were born of Earth and Ocean amongst all these she has her due portion. The son of Cronos did her no wrong nor took anything away of all that was her portion among the former Titan gods: but she holds, as the division was at the first from the beginning, privilege both in earth, and in heaven, and in sea. Also, because she is an only child, the goddess receives not less honor, but much more still, for Zeus honors her. Whom she will she greatly aids and advances: she sits by worshipful kings in judgement, and in the assembly whom she will is distinguished among the people. And when men arm themselves for the battle that destroys men, then the goddess is at hand to give victory and grant glory readily to whom she will.”

My mind began to race with questions about fate, free will, Higher True Will, the will of the gods and the seemingly conflicting paradox of the interaction of these things. Did I choose my path? Did my Higher Self choose my path? Was my path predestined in a totally different way than it is now? Was this the will of the gods? Is free will an illusion? I looked up at Hekate about to ask her about it when she gave me a knowing smirk like Mona Lisa, to which the vision ended. Interestingly, another interpretation of the name Hekate is related to “will”. Some researchers believe that her name means ’by whose will’ or perhaps ‘she who works her will’. Whatever the case may be, I’m just grateful that I am who I am today and not a Christian Youth Pastor. It may not be an easier path, but it is my path. 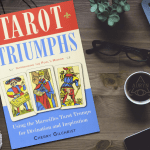 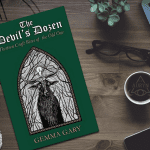 July 11, 2017 Review: The Devil's Dozen
Recent Comments
0 | Leave a Comment
"This makes me love jack-o-lanterns even more."
Anonymous Jack-O’-Lanterns and the Devil
Browse Our Archives
Related posts from For Puck's Sake