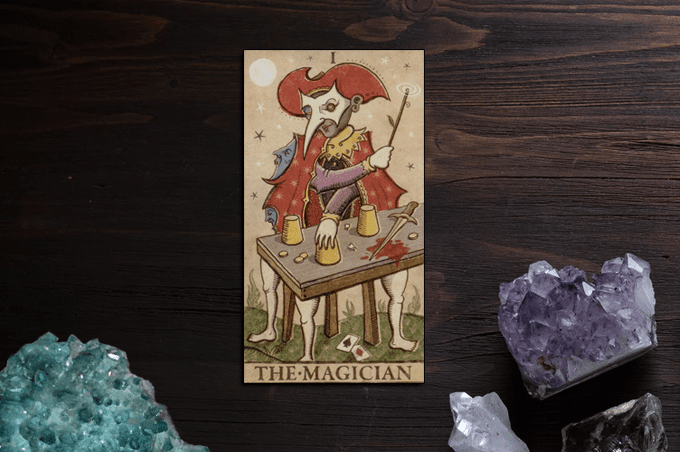 The Trionfi Della Luna is a stunning tarot deck by artist Patrick Valenza, who is also the creator of the Deviant Moon Tarot Deck. The deck is inspired by older Italian decks such as the Marseilles and Tarrochi instead of the more popular Rider-Waite-Smith decks which most decks, including his Deviant Moon Tarot are modeled around. Being true to tradition of these older decks, every Major Arcana has a name on it except the Death card, which older decks never had the name written on it as there was this superstition at the time that to speak or write death’s name would bring it about. As much as I like the Deviant Moon Tarot Deck, I actually greatly prefer the Trionfi Della Luna.

The presentation of the actual deck’s packaging is absolutely wonderful. The deck box is wrapped in antique gold paper with beautiful unique artwork by Patrick, who also autographs it. The deck also comes with an alternative Tower card and 10 horizontal oracle cards styled in the same fashioned in the same style as the Trionfi Della Luna. Each card is set against a sepia / papyrus toned hue, which helps give this deck an anachronistic antique feel to them. The card stock is good quality.

Patrick’s unique art style is amazing. The cards are full of imps and otherworldy characters that have a beautiful and surreal lunacy about all of them with a hint of humor. For example La Papessa (The Popess / High Priestess) looks like she’s being burned at the stake, but she’s standing on a pile of books, like it’s a book burning. The imagery automatically conjures up ideas of forbidden knowledge and the sacrifice for occult wisdom within me. The pip cards themselves, while looking basic at first glance have small visual clues and cues in the center of the image to help you in regards to the meaning instead of just duplicating the same suit over and over (one sword, two swords, three swords, etc). This has quickly become one of my favorite tarot decks. 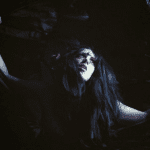 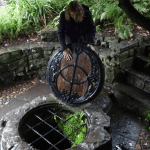 November 26, 2017 The Man, The Myth, The Mankey
Recent Comments
0 | Leave a Comment
Browse Our Archives
Related posts from For Puck's Sake