October 2020 is definitely the month of the The Craft. As most of you are aware, the legacy sequel of the witchy cult classic The Craft arrives this month, and we also just saw the release of original cast member Rachel True’s True Heart Intuitive Tarot. Patheos Pagan channel editor Jason Mankey was reached by True’s publicist to ask if he’d be interested in doing a video interview. Being the fantastic friend that he is, he suggested that I perform the interview since he knows how much the original The Craft sparked my interest in witchcraft as a child, and that Rachel and I are acquaintances who chat on social media fairly frequently.

Rachel True, an actress best known for her role in The Craft, is a lifelong occultist. She had been reading tarot cards long before being cast in the 1990s witchy cult classic. In this two part video series, I chat with Rachel to discuss several topics ranging from her new True Heart Intuitive Tarot box set, tarot in general, Jungian archetypes, intuition, psychic ability, magick, and her experience in the movie The Craft and as an actress, including the exclusion she’s faced as a mixed ethnicity actress. Rachel is one of the most down to earth and grounded people I know and she’s incredibly spiritual and intuitive while still keeping it real and being authentic. There’s a lot of great insight and laughs throughout this video and I hope that you enjoy it as much as I enjoyed chatting with her. 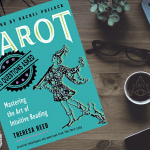 October 23, 2020 Review: The Dictionary Of Demons
Recent Comments
0 | Leave a Comment
"This makes me love jack-o-lanterns even more."
Anonymous Jack-O’-Lanterns and the Devil
Browse Our Archives
Related posts from For Puck's Sake