Glossolalia is most commonly known today as “speaking in tongues”, and is practiced by Pentecostal and Charismatic sects of Christianity. Growing up in a Pentecostal & Evangelical hybrid church I remember observing glossolalia first hand. Many I believe were making it up, but I do believe that some were genuinely speaking in glossolalia while in a state of ecstasy. The Pentacostal church believes that glossolalia is a gift of the Holy Spirit that was given during the Pentacost in the Bible, but believe unlike other sects of Christianity, that these gifts are still available to Christians today. I know some but very few witchcraft traditions that actively use glossolalia today, so I wanted to research its history since in my mind, I associate it with Christianity, and share my findings.

I quickly found that glossolalia is not a Christian phenomenon. In fact, in the Bible Jesus refers to glossolalia as a Pagan practice. “And when you pray, do not babble on like Pagans (Gentiles)…” (Matt 6:7)  The original word used for “babble” is battologéō which means “properly, to blubber nonsensical repetitions; to chatter (be “long-winded”), using empty (vain) words (Souter).” This idea that Jesus is referring to glossolalia as an already Pagan practice is not only backed by history but by Jesus stating that “In my name they will drive out demons; they will speak in new tongues (glṓssa)” (Mark 16:17)

In three different dialogues by Plato, he makes reference to ecstatic speech that is unintelligible, so does Virgil in the Aeneid. Glossolalia appeared in the Eleusinian, Dionysian, and Orphic Mystery Religions, as well as in the ancient cults of Mithra and Osiris. Sibyls and Pythias were known as well for their practice of glossolalia and ecstatic speech while under trance induced states. Among other ecstatic and shamanistic practices we also find glossolalia.

George B. Cutten writes in An Ethnological Study of Glossalalia that, “Glossolalia is practiced among non-Christian religions: the Peyote cult among the North American Indians, the Haida Indians of the Pacific Northwest, Shamans in the Sudan, the Shango cult of the West Coast of Africa, the Shago cult in Trinidad, the Voodoo cult in Haiti, the Aborigines of South America and Australia, the Eskimos of the subarctic regions of North America and Asia, the Shamans in Greenland, the Dyaks of Borneo, the Zor cult of Ethiopia, the Siberian shamans, the Chaco Indians of South America, the Curanderos of the Andes, the Kinka in the African Sudan, the Thonga shamans of Africa, and the Tibetan monks.”

Glossolalia is considered a divine language, regardless of which religious tradition you come from. It ranges from being the language of the Holy Spirit, angels, gods, or spirits while in a ecstatic state of trance. It has often been compared to the barbarous words of magical traditions such as some of the phrases and words in The Greek Magical Papyri. Enochian, the language taught to John Dee by angels, is considered by many to be a recorded form of glossolalia.

L. Carlyle May of Harvard University writes in A Survey of Glossolalia and Related Phenomenon in Non-Christian Religions the following; “Guillaume states that in 853 B.C. four hundred prophets raved in ecstasy before the gate of Samaria, and in ancient Egypt necromancers uttered formulas, believed to be revelations from the gods, made up of foreign words and senseless noises. The more mysterious and incomprehensible these formulas were, the greater their power was thought to be. It is entirely probable, moreover, that sorcerers of India and China, contemporaneous to the Samaritans, spoke incoherently while divining, curing, and communing with the spirits”

Glossolalia also found its way into the early Mormon church, as Joseph Smith stated that the “restored” (Mormon) church “believe in the gift of tongues, prophesy, revelation, visions, healing, interpretation of tongues”. Glossolalia also has a strong history in mediumship, Spiritism and Spiritualism. Allan Kardec, the founder of Spiritism (which was less religious oriented than Spiritualism), pointed to glossolalia as evidence of a spirit’s presence. Allan Kardec’s work was foundational for much of the practices of modern mediumship.

In Psychology and the Occult Carl Jung also observed a trance medium and mentions glossolalia as part of her ecstatic trance state,”In reconstructing her somnambulistic ego we are entirely dependent on her subsequent statements, for in the first place the spontaneous utterances of the ego associated with the waking state are few and mostly disjointed, and in the second place many of the ecstasies pass off without pantomime and without speech, so that no conclusions about inner process can be drawn from external appearances. S.W. is almost totally amnesic in regard to the automatic phenomena during ecstasy, in so far as these fall within the sphere of personalities foreign to her ego. But she usually has a clear memory of all the other phenomena directly connected with her ego, such as talking in a loud voice, glossolalia, etc. In every instance, there is complete amnesia only in the first few moments after the ecstasy.” 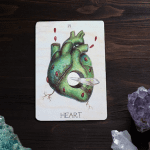 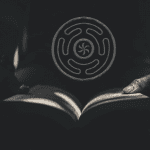 December 12, 2017 Hekate's Library - A Reading List
Recent Comments
0 | Leave a Comment
"This makes me love jack-o-lanterns even more."
Anonymous Jack-O’-Lanterns and the Devil
Browse Our Archives
Related posts from For Puck's Sake