Devotion To The Most Holy Death

Steven Bragg holds initiations into several Wicca and Wicca-based traditions as well as African Diasporic Religious and spiritual practices, including Haitian Vodou, Palo Mayombe, and Quimbanda. He is the founder of the New Orleans Chapel of the Santisima Muerte He is the author of the booklets La Santisima Muerte: Devotional Guide of the Most Holy Death and La Santisma Muerte: Working With Her Robes, exclusive to the Vodou Store.

First off, for those who are unfamiliar, who exactly is Santa Muerte? Where does she come from?

La Santa Muerte, or La Santisima Muerte, is a Mexican folk saint. Her name translates as The Holy Death, or The Most Holy Death, respectively. Most evidence indicates she’s been prayed to for decades in Mexico, possibly longer. However, her visibility and popularity as a miraculous folk saint has exploded since the appearance of the first public shrine in Mexico City in 2001. Thanks to a few books in English (and other languages) and the internet, she’s now making her way across the globe as one of the fastest-growing spiritual practices, especially in the Western hemisphere. There’s a good chapter of her history in Professor Andrew Chesnut’s book, Devoted to Death.

How does she differ from other death deities and spirits around the globe? Are there any similarities?

Whereas many other death deities and spirits are entities that rule over the underworld, guard the gates of the cemetery, or were once human, La Santa Muerte is believed to be Death itself. She is the personification of the act of transitioning from this world to the next. Although there are regional stories in Mexico that she was once a nun or a virgin who died and became La Santa Muerte, this is not how she was presented to me. Her traditional creation story is tied to the Biblical story in Genesis. However, she still has many similarities to other death deities and spirits, such as dominion over the dead, knowledge of arcane arts, and her appearance is that of a female Grim Reaper with several of the same symbols and objects.

It was actually the other way around. Just before I moved back to New Orleans in 2010 I was contemplating what to do to help deal with the still-large amount of the wondering dead from the effects of Hurricane Katrina. La Santa Muerte, in her white robe, came to me in a dream and instructed me to put something for her outside my house, and that’s what I did as soon as I got back. A little over a year passed before she showed herself to me again wanting me to work more with her. I agreed to on the condition she sent someone to teach me how to respectfully work with her. Within a month I received an email from a friend I’d met while in Massachusetts and hadn’t heard from in over a year. Nick Arnoldi, who passed away in 2012, and I began to re-connect, and the subject turned to spiritual matters. As it turned out he’d been taught how to work with La Santa Muerte when he lived in Mexico back in 2001. For several months, up until his death, he passed me what he’d learned, and it’s just gone from there. I humorously like to say all the other spiritual practices I’ve initiated into are the result of my pursing them, but La Santa Muerte is the only one who pursued me.

Can you tell me a bit about why you founded the New Orleans Chapel of the Santisima Muerte? What is your intention with it?

It happened almost by accident. After I began to work with her more, she came through and helped me with a personal problem I’d been having. As a show of gratitude I expanded the small, outdoor shrine I’d initially built for her into a much larger structure, as is typically what happens in Mexico when she performs a miracle or does something big for someone. Then a friend suggested I register it as a non-profit organization so I could accept donations without getting in trouble with the IRS. That was in the beginning of 2012. Once I did that the private, indoor altar I’d created for her expanded, eventually taking up an entire room, and that’s when I began holding chaplet services with other people present. This has continued for the last six years. I suppose the underlying intention was to spread her devotion here in New Orleans, and it happened in a very organic way with her guidance.

Santa Muerte often receives a bad rap as being a saint for criminals. Why is this?

The short answer is because death does not discriminate, death eventually comes for everyone. Though, to go a little further we see that for those the Catholic Church turns away, such as homosexuals, prostitutes, and criminals, La Santisima Muerte welcomes with open arms. We find many of those on the fringes of society praying to her and getting fast results. The media in Mexico and the U.S. plays up the criminal aspects, I’m assuming for ratings. Then of course there’s the overarching, cultural association within our Western, majority Christian society of anything macabre being evil, therefore only bad or unsavory people would pray to a death figure. Unfortunately, law enforcement on both sides of the border largely plays into this and does nothing to improve her reputation. The vast majority of people who pray to her have nothing to do with criminal activity.

Santa Muerte has been gaining in popularity over the last several years, why do you think this is?

In addition to the English language books and the internet I feel there is a draw to her as an aspect of Mother, Grandmother, or Godmother who accepts all, as she eventually will. Despite her appearance she’s approachable and familiar in this way to a more general population. However, to a certain group of the population I think she’s very attractive as Queen of Witches, which in my practice is when she’s in her black robe and seated on a throne, although that’s not a hard and fast rule for everyone. Particularly within the U.S., but also in other countries, Pagans, Witches, and other magic workers are being drawn to her in this aspect. Regardless of how people are finding her, though, one of the main reasons she’s gaining in popularity so quickly is because once a connection has been made with her, she works and usually very quickly.

Does one need to be of a certain faith or practice to work with Santa Muerte?

Absolutely not! I don’t consider myself Christian in any way, but I work with her through a folk Catholic system as that’s the way she came to me, and it’s out of respect to her and Nick that I continue to do so. Also, she’s made it clear to me that she wants this system preserved, and it’s the way I, personally, should approach her. However, she is currently crossing over into other faiths and practices. What I’ve witnessed so far is a kind of trial-and-error process, with different people getting different results, but that’s the nature of spiritual evolution. In fact, I’m currently in the beginning phase of creating a system of working with her for modern Pagan Witches, drawing from my own experience within that realm. Everyone should feel free to approach her in any way they feel is right for them, because it’s ultimately their own personal Death that they’re working with. There’s “La Santisima Muerte,” and then there’s that particular Santisima Muerte that will come for you. “These are the mysteries…” as they say. Haha!

Can you share some of the most interesting experiences you’ve had with Santa Muerte?

I’ve lost track of all the things in my life I could attribute to her over the last seven years, but the most impressive experiences have been watching her come through for others who’ve made their connections to her through my guidance and the New Orleans chapel. I’ve witnessed money come out of unexpected sources for people in dire need, remission of cancer, criminal charges suddenly dropped, couples who were having problems finally getting pregnant, just an entire spectrum of little miracles. Out of all the spiritual beings I’ve ever worked with, she’s the one I’ve seen the most consistent and fast results from, and if a prayer isn’t answered, the reason why almost always presents itself in a pretty decent amount of time.

Can you explain briefly the different robe systems? It seems she’s gaining more and more robe colors as she grows in popularity, or are these systems that have always existed with her?

There are several systems out there for working her different colored robes, and it just depends on the region she developed in and which system works best for an individual. The older, more traditional system has her in three colors: white, red, and black. This color triad is found in many, many systems of witchcraft historically and globally. The newer systems of the different and multi-colored robes have been influenced by African-derived systems, Western esoteric systems, and spiritual supply manufacturers. Different regions, botanica owners, and individual devotees have come up with their own interpretations, and these are constantly changing. Again, it’s whatever works best for an individual, as the relationship between La Santa Muerte and the devotee is a private and personal one. 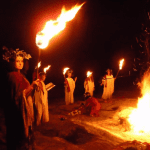 January 18, 2018
Sorita d'Este: Devoted To The Saviouress
Next Post 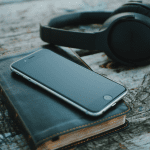 January 22, 2018 Things That Ruin Occult Podcasts
Recent Comments
0 | Leave a Comment
"This makes me love jack-o-lanterns even more."
Anonymous Jack-O’-Lanterns and the Devil
Browse Our Archives
Related posts from For Puck's Sake 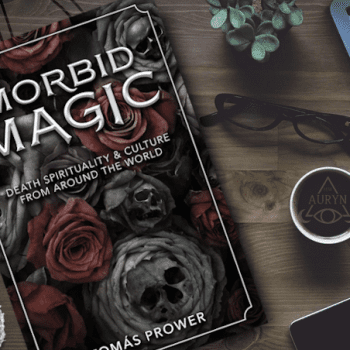 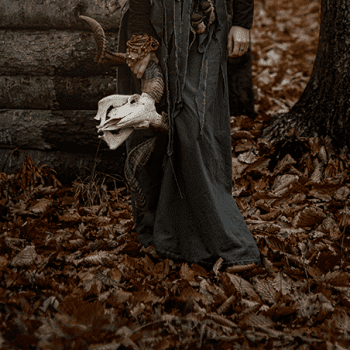 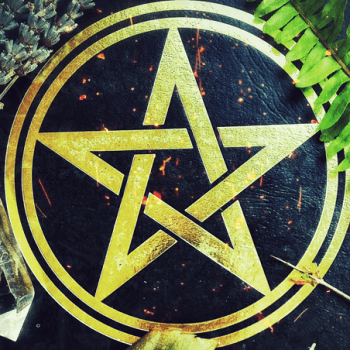 Pagan
What Is Black Rose Witchcraft?
For Puck’s Sake
TRENDING AT PATHEOS Pagan