The Real Witchcraft in The Chilling Adventures of Sabrina

Joshua Conkel is a Los Angeles based playwright and screenwriter. His work includes the celebrated short film Curmudgeons (directed by and starring Danny Devito), an upcoming graphic novel about teenage witches called The Chalk Boy, and too many plays to name. In recent years he has written for television, specifically for A Series of Unfortunate Events and Chilling Adventures of Sabrina, both for Netflix. He also happens to be a witch and tarot reader. You can find him at joshuaconkel.com and on twitter @joshuaconkel.

You’re a self-described witch, and I know you were raised with a bit of magick. Can you talk about that a bit? What kind of magick were you raised with and what does your practice look like today?

I come from Eastern Kentucky where there’s a strong tradition of water witching, herbalism, and midwifery, which all come together in what some people call “kitchen magic” or “granny magic.” No one in my family would have described themselves as witch per se, but there were strong superstitions (like painting your door blue to keep away “haints”) and great grandmothers who had premonitions or whisper off someone’s warts.

Today, I keep what I call a “hillbilly ancestor altar” and I have a personal practice that mixes Appalachian craft with LA glamour and gay magic. I don’t worship any particular deities.

Were you a fan of the show Sabrina The Teenage Witch when you were brought onto the project? Did that show influence anything on Chilling Adventures of Sabrina?

I wasn’t. I was a smidge too old for it, being 15 or so when it aired. I didn’t like it. The humor was too softball for me as a cynical teenager, though I can appreciate it more now in my wizened old age. The truth is, we don’t reference it at all on our show except for the existence of the characters. It’s sort of a jumping off point, along with the old comics, but we’re not trying to recreate it. Quite the opposite, really.

There’s also a bit of a Buffy feel to certain episodes – particularly the nightmare episode. Which shows, books or graphic novels were influential to Chilling Adventures of Sabrina?

What’s crazy is that our showrunner and creator has never seen Buffy (though of course the rest of the writers’ room are fans) so some of those similarities are coincidental or just similarly zeitgeist-y. Our influences are the horror films of the 60’s, 70’s, and 80’s (especially stylish ones like Rosemary’s Baby) with a dash of John Hughes and some comic book influences as well.

At the very beginning of the show, there’s a scene with Sabrina and her friends are discussing the zombie movie they just watched. In the discussion, they talk about how on one level the film was a metaphor, how it was about zombies on one level and on another level it’s about the cold war, civil rights, and the collapse of the nuclear family. When watching this, it seemed to me that they were making it clear that while yes, on one level Chilling Adventures of Sabrina is about Witches, on another level it was a metaphor. For you, what metaphor is Chilling Adventures of Sabrina about?

For me, it’s a parable about the difficulty of coming into one’s own power, of living authentically when it’s difficult to do so and it would just be easier to conform to norms. Sabrina doesn’t want the Path of Night or the Path of Light. She’s looking for a third path and she’s willing to take the hits that search will bring.

The witches of Chilling Adventures of Sabrina are pretty dark compared to more modern shows and films about witchcraft. While it is fantasy, do you feel that the show helps or harms public perception of those who identify as witches, particularly during our current religious and political climate when the stage is ripe for another era of “Satanic Panic”? Why or why not?

To say our show harms the perception of witches is such a facile argument and its one made (unsurprisingly) by practitioners with the least cultural and historical knowledge of witches. First of all, it’s a selective outrage for the sake of boosting one’s own social media profile. Why our show and not the film Hocus Pocus? Could it be because our show is new and a hit and a hot topic of conversation? Methinks so.

Secondly, the witch has always been both fact and fiction at the same time and the two versions inform one another constantly. When I was a teenager, everyone bemoaned the film The Craft, but you know what? That film brought a whole generation to witchcraft so at the end of the day it did us a service.

Thirdly, one should be deeply suspicious any time someone talks about “real witches” because there are too many paths to speak monolithically about it. No one gets to speak for “real witches.”

Fourthly, it’s exhausting to explain context and irony to adults who should know better.

There’s a lot of occult nods and homages in the show. The curse used on the Weird Sisters at the beginning of the series seems to come from Paul Huson’s Mastering Witchcraft. The description of Familiar Spirits is more in alignment with Witchcraft Tradition, and the exorcism ritual seems pretty legit and operational from an occult point of view and invokes the names of the Mighty Dead (glorified witchcraft ancestors) including the more modern Sybil Leek. This theme of workable magick is in alignment with the graphic novel which seems well-researched. As I wrote in a review of the graphic novel, the honey jar spell seemed pretty legit from a folk-magick point of view. What sort of extra occult research went into writing Sabrina?

All of the writers have at least a passing interest in the occult. A couple of us are practitioners of one kind or another. I know the honey jar spell is one our showrunner got from a friend (a very powerful Hollywood writer who also happens to be a witch). I wrote the exorcism ritual as I write all of my own spells. I tried to put myself in the Spellman women’s shoes and write a ritual that seemed practical and useable. All that said, some writers research more than others. The mandate has always been to borrow from books and films, not so much real witchcraft practices.

It’s interesting that a lot of early occultists wrote fiction before writing about the occult (such as Gerald Gardner, Dion Fortune, Helena Blavatsky, etc.) What do you feel the connection is between fiction and occultism? Do you think they influence one another?

I think occultism is an art so it’s an easy leap. It’s called witch-CRAFT for a reason. In it’s simplest terms, it’s the craft of manifesting one’s desires or needs through crafting; through the creation of objects, through the voice, through movement, through song or ritual or whatever else. It’s not so different than painting or writing.

I’ve also noticed a tendency for writers to circle themes of occultism before taking the plunge into practicing and I assume that’s just a way of getting comfortable with it.

Aunt Hilda and Aunt Zelda seem to be representative of Sabrina’s duality. The show mentions three graphic novelists who are occultists as well, such as Alan Moore, Grant Morrison, and Neil Gaiman. There’s also references to Cain and Abel throughout the show when it comes to the Aunts. For example, there’s Cain’s Pit and Zelda’s nightmare which seems to be the story of Cain and Abel in reverse – but the aunts also seem to be similar to Neil Gaiman’s Cain and Abel in the Sandman as well, where Cain keeps killing Abel. There’s also the tie in with Lilith in the story and the Malum Mallus, which seems reminiscent of the fruit of the tree of knowledge of good and evil. Why is there such an emphasis on the book of Genesis and it’s surrounding lore? Is this intentional or coincidental?

It’s intentional. We’re using the structure of a major organized religion and flipping it on its head to explore issues of female autonomy, empowerment, justice, and fairness. Of course, we’re doing it in an ironic, kitschy way that hopefully doesn’t scare too many people off.

You named the high school women’s group WICCA. Why? Was it to say “Wicca isn’t what these witches do?” Was it a callback to Willow in “Buffy the Vampire Slayer” complaining about a “bunch of wanna-blessed-bes” as opposed to the “real witches” or was it a reference to ordinary women claiming their power since Susie and Rosalind start having witchcraft-oriented skills and experiences after starting the group? Why name the group an acronym that’s the name of a modern religion of Witchcraft?

This is hard to answer because that’s introduced in the pilot before there was a complete writers’ room. I can’t say for sure, but I think it’s having fun with the question of how much the mortals know or don’t know about the secret society of witches living under their noses. I also just think Roberto thought it was funny.

What other projects are you working on that we can look forward to?

I’m working on season 2 of Sabrina and I’ve optioned my horror film Cold Spell with Miramax so fingers crossed you can see that next year.

Review: The Chilling Adventures of Sabrina

Samhain, Sabrina, and the Succubitches

The Hillfolks’ Hoodoo of Byron Ballard

That Time I Danced With The Devil 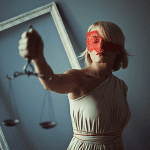 November 8, 2018
Six Books For The Activist Witch
Next Post 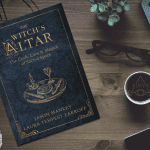 November 12, 2018 Review: The Witch's Altar
Recent Comments
0 | Leave a Comment
"This makes me love jack-o-lanterns even more."
Anonymous Jack-O’-Lanterns and the Devil
Browse Our Archives
Related posts from For Puck's Sake