Do All Dreams Have Meaning?

I recently was re-invited to appear on Weird Web Radio for a discussion and to promote my book Psychic Witch. It’s always an enjoyable experience and I could probably talk to Lonnie for hours. Among the myriad of topics discussed in the episode, the one I wanted to expand upon was the subject of dreams. While conversing on the subject of synchronicity in waking life, this lead to a discussion about dreams. In the interview I state that I believe all dreams have meanings. How can all dreams have meanings?

One of the best categorizations of dreams I have come across comes from the Roman writer Macrobius in about 400 CE where he’s commenting on the Dream of Scipio from Cicero’s De re publica written in about 54 BCE. In the commentary Macrobius categorizes dreams into the following five types—Somnium, Visio, Oraculum, Insomnium, and Visum.

With the first three it’s obvious how they have meaning. They’re prophetic in nature or involve direct spirit contact. The last two are more along the lines of what we think of as “meaningless dreams.” However, all dreams have meanings. That doesn’t mean those meanings are prophetic in nature. I truly believe that all dreams can give us insight into ourselves and our minds. One of the things I discuss is that some people will disregard dreams as having no meaning, citing that the things that appeared in their dream were influenced by things from earlier in the day.

The Higher Self, as a direct connection to the Universe/Spirit/Source or whatever name you want to put on it, often speaks to us through dreams using archetypal imagery and symbolism. The Higher Self speaks to us in dreams via our subconscious using ways that our conscious mind may hopefully understand and interpret. As a psychic, I understand that psychism works with our personal symbol set that we understand.

So while your dream may very well be directly influenced by things you saw or experienced earlier that day, your subconscious is choosing that symbol system that is fresh in your mind to relay a message to you. Often, this is insight into anxiety, hopes, fears, goals we’re striving towards or areas of our personal life that require healing. It may not be some grand omen about the future or your path—but it sheds light on all of that “little work” and inner work that we need to do on a personal level to make the most of ourselves and our lives. Just because a dream isn’t prophetic doesn’t make it any less important.

So how can you discern the difference between whether a dream is prophetic or not? This is why keeping a dream journal is important. By recording your dreams and referring back to them you start to understand which dreams are prophetic and which ones are not, especially since the prophetic dreams and dreams that involve genuine spirit contact have a different feel to them, just as all of the five categories of dreams above do.

You can listen to the full interview I did on Weird Web Radio below:

About Mat Auryn
Mat Auryn is a witch, professional psychic, and occult teacher. He is the author of 'Psychic Witch: A Metaphysical Guide To Meditation, Magick, and Manifestation'. He is a High Priest in the Sacred Fires Tradition of Witchcraft. As a psychic witch, Mat has had the honor and privilege of studying under some of the most prominent witchcraft teachers, elders, and witchcraft traditions. He runs the blog For Puck’s Sake on Patheos Pagan, is a content creator for Modern Witch, has a column in Witches & Pagans Magazine entitled 'Extra-Sensory Witchcraft', and a column in Horns Magazine. He has been featured in various magazines, radio shows, podcasts, books, anthologies, and other periodicals. You can read more about the author here.
Previous Post 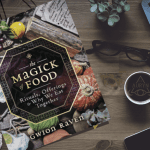 April 3, 2020 In Praise of the Holy Hag
Recent Comments
0 | Leave a Comment
"This makes me love jack-o-lanterns even more."
Anonymous Jack-O’-Lanterns and the Devil
Browse Our Archives
Related posts from For Puck's Sake