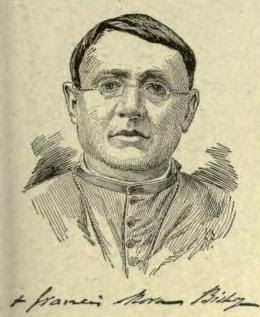 Francis Mora, third Roman Catholic Bishop of Monterey and Los Angeles, was born near Vich, province of Barcelona, Spain, Nov. 25, 1827. Owing to the poverty of his parents, he was obliged to work hard for the means to pursue his education, which he completed at the seminary of his native city in 1854. He then attached himself to Rt. Rev. Thaddeus Amat, and accompanying him to California in November, 1855, he became busily engaged in mission work throughout the diocese. He was ordained to the priesthood at Santa Barbara, Mar. 19, 1856, being at once appointed rector at Monterey, and shortly afterward, of San Juan Bautista. In 1861 he was transferred to San Luis Obispo, and in February 1863 was called to Los Angeles and appointed rector of the pro-Cathedral of Our Lady of Angels. Father Mora was appointed Vicar-General of the diocese in 1864, and nine years later, on May 20, 1873, he was preconized bishop of Mosinopolis in partibus and coadjutor to Bishop Amat, being consecrated on Aug. 3rd following. He succeeded to the see of Monterey and Los Angeles on the death of the latter prelate, May 12, 1878, and during his long administration has done much to extend the influence of the Catholic Church in Lower California. Bishop Mora instituted many litigations to defend the disputed rights of the Church and to recover much of its property that had been wrongfully appropriated. His contentions were so well-taken as to be always sustained by the courts. In 1893, being in delicate health, he offered his resignation to the Pope but was prevailed upon to accept a coadjutor, in the person of Rt. Rev. George Montgomery. Finally, however, he obtained his release, and on May 6, 1896, was transferred to the titular see of Hieropolis in Phrygia. He soon afterward transferred his residence to his native country, where he spent the remainder of his life.

NOTE
Bishop Mora was buried in Spain but reinterred in Los Angeles in 1962. His remains are now buried in the new Cathedral of Our Lady of the Angels, Los Angeles. (The word “preconize” means to extol in public. So Mora was publicly pronounced a bishop in 1873.) A coadjutor bishop is appointed to assist the reigning bishop and has the right of succession. They, along with Auxiliary Bishops and sometimes retired Bishops, have what are called titular sees, i.e., dioceses that no longer exist. Most of these dioceses were in North Africa, and were wiped out during the Moslem invasions of the seventh and eight centuries A.D.


In 1850, the Diocese of Monterey, the first Catholic diocese founded in California after the United States took over California, was erected. The Archdiocese of San Francisco was erected in 1853. Monterey covered all of southern California. The title was later changed to Monterey-Los Angeles. In 1922, Los Angeles-San Diego became a separate diocese, and in 1936 Los Angeles became an archdiocese and San Diego a diocese.

May 21, 2011 College Play, St. Ignatius, Chicago, December 1906
Recent Comments
0 | Leave a Comment
"Wow! I didn't know about that Statement from the US Bishops. The fact that they ..."
Florence Ziegler “It’s About Time They Got Here”:  Catholics ..."
"Very interesting. Why did the Jesuits change the name of the school from a saint's ..."
Kristin Nealon Wilson Ocds Who’s Buried in Catholic Cemeteries?
"It is a joy to that you are back blogging. Thanks for the reference to ..."
Joe A Church Historian’s First Communion
"Thank you for all your enjoyable, informative posts on Church history. I agree that the ..."
Kathleen Brady Looking at the Scandals– A Church ..."
Browse Our Archives
get the latest from
Catholic
Sign up for our newsletter
POPULAR AT PATHEOS Catholic
1