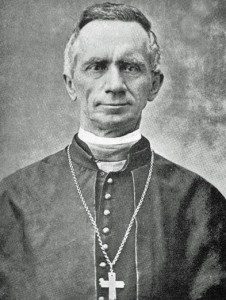 William Henry Elder was born in Baltimore in the year 1819, and, corresponding to the pious wish of his parents early in life, looked forward to the priesthood as the work of his life. He began his studies in Mount St Mary’s College, but pursued a theological course for three years in the College of the Propaganda at Rome. He was ordained in 1846, and, returning to the United States, was for several years president and professor of theology at Mount St Mary’s. In this quiet field of labor, he had impressed many bishops with his singular abilities.

On the 9th of January, 1857, he was selected for the see of Natchez, and received episcopal consecration on the 3rd day of May, in the cathedral of Baltimore, the consecrator being the Most Rev. Francis P. Kenrick, assisted by the Right Rev. John McGill of Richmond, and Rt. Rev James F. Wood, coadjutor of Philadelphia. He was the twelfth bishop that Mount St Mary’s had given to the Church in the United States.

Bishop Elder was actively laboring for his flock in Mississippi when the civil war began. In time, the State became the scene of battle, and the bishop with his few priests, and the communities of sisters, did all in their power to alleviate suffering, and to prepare men for a Christian death. One of his priests died amid his charitable labors. In 1864, the post commandant at Natchez, one of those fanatics who confound their Protestantism and their citizenship, issued an order requiring all clergymen to insert in their public worship a prayer for the President of the United States. Bishop Elder remonstrated, showing how nobly he and his clergy had acted, but taking the broad ground, that Congress itself could not make alterations in the form of the Mass, as offered by Catholics throughout the world, and that no Catholic priest could obey such an order. The brutal Colonel Farrar arrested Bishop Elder and sent him out of his diocese to Vidalia, Louisiana. It was one of the most daring and outrageous infringements of liberty of conscience ever perpetrated in the United States, and was committed by an officer of the general government. General Brayman soon revoked the order, but manifested his own bigotry, by the use of terms of grossest insult to the noble Catholic bishop.

When peace was at last restored, Catholicity in Mississippi was in a wretched condition; flocks had been scattered, priests were gone, institutions suspended. Bishop Elder went zealously to work to restore all, but when prosperity was beginning to dawn, the yellow fever of 1878 visited the diocese. Bishop Elder showed his wonted zeal, and was stricken down; the report even spread that he was dead as three of his priests and many sisters were. But he lived to resume his labors, and to decline in the following year the position of coadjutor to the Archbishop of San Francisco.

He yielded indeed on the 30th of January, 1880, to the command that he should proceed to Cincinnati to assume, as Bishop of Avara, a duty before which many had quailed: the administration of the diocese amid its financial wreck. The diocese of Natchez was endeared to him by his missionary labors, and his patient care; he left it with a population of 12,500, attended by twenty priests who offered the Holy Sacrifice in 41 churches scattered through the State. The Catholic body was gaining by natural increase, and by conversion, nearly one fourth, the baptisms being of adult,s and there were several religious orders laboring by good example and sound instruction to diffuse the gospel of truth. Still retaining the administration of Natchez, Bishop Elder took his residence in Cincinnati. Difficulties beset him, but his wise, temperate, and prudent course soon restored order, and around him the best elements in the diocese. In February 1882, he presided in the Fourth Provincial Council of Cincinnati, where decrees were adopted based on the necessities of the time. By the death of Archbishop Purcell, July 4th, he became Archbishop of Cincinnati and soon received the pallium. Elder took a prominent part in the work of the Third Plenary Council of Baltimore, the sessions of which were through nearly the whole month of November, 1884.

November 9, 2013 Catholic Poetry: "Newman," by George N. Shuster
Recent Comments
0 | Leave a Comment
"Thank you for all your enjoyable, informative posts on Church history. I agree that the ..."
Kathleen Brady Looking at the Scandals– A Church ..."
"Such laws might have done Ireland some good, in the case of the Magdelenes. The ..."
HematitePersuasion “A Million Foreigners, Most of Them ..."
"sounds like a total waste of time"
kyuss, cannabis farmer Holy Name Rally at Ebbets Field ..."
"This is a marvelous joining of three important Brooklynites who happened to have gone to ..."
Joe Three Giants of Brooklyn Catholicism
Browse Our Archives
Follow Us!