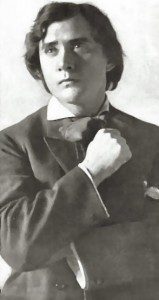 Born Peter Christopher Arnold Daly to Irish parents, the young man grew up in Brooklyn, where he attended Sacred Heart Academy in Fort Greene, a school long since closed. After the death of his father, he started acting at age seventeen. He was noted for having helped introduce American audiences to the plays of George Bernard Shaw. Mrs. Warren’s Profession, which dealt with prostitution, was closed down for indecency by the authorities. During the early silent film era, Daly became a matinee idol, appearing some of the popular Pearl White serials. His last film was In Borrowed Plumes (1926). Daly died on January 13, 1927, when a fire consumed his Manhattan apartment. He was buried in the Bronx’s Woodlawn Cemetery.

June 16, 2014
“The Church Would Look Foolish Without Them”: Thomas O'Neil, Toledo, Ohio
Next Post

June 17, 2014 From County Kerry to New Orleans: Father John M. Cronin, S.J. (1873-1939)
Recent Comments
0 | Leave a Comment
"Wow! I didn't know about that Statement from the US Bishops. The fact that they ..."
Florence Ziegler “It’s About Time They Got Here”:  Catholics ..."
"Very interesting. Why did the Jesuits change the name of the school from a saint's ..."
Kristin Nealon Wilson Ocds Who’s Buried in Catholic Cemeteries?
"It is a joy to that you are back blogging. Thanks for the reference to ..."
Joe A Church Historian’s First Communion
"Thank you for all your enjoyable, informative posts on Church history. I agree that the ..."
Kathleen Brady Looking at the Scandals– A Church ..."
Browse Our Archives
Follow Us!