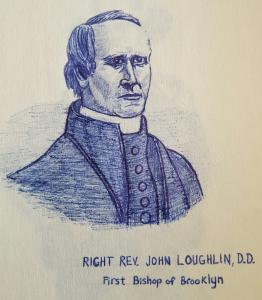 From the Pulpit: Bishop John Loughlin, St. James Pro-Cathedral, Brooklyn, New York, July 13, 1884. The first Bishop of Brooklyn, John Loughlin (1817-1891) served in that role for 38 years, from 1853 until his death in 1891. He was only 36 years old when he was appointed. He was responsible for erecting across Long Island a vast network of Catholic parishes, schools, hospitals and orphanages where there were none. Almost none of his papers have survived, but here we have a transcript of one of his sermons from The Brooklyn Eagle. For many years, newspapers sent reporters to various churches to report on the sermons for the next day’s news. This is one of the few complete sermons we have by the bishop, who spoke little but did much.

Founded in 1822, St. James was the first Catholic church on all of Long Island. After the Diocese was erected in 1853, it became the cathedral. For decades it was known as the “Pro-Cathedral” (“pro” in the sense of temporary) until a larger cathedral was to be built. It never was, and so it became simply “the cathedral.” In 1982, it was named a Basilica.

THE PULPIT. Sunday Sermons in Brooklyn Churches. Bishop Loughlin on the Truth of God as Taught by Christ. The Brooklyn Eagle, July 14, 1884, p.2.

Bishop Loughlin preached in the Jay Street cathedral yesterday morning, from the story of the loaves and fishes, in St. Mark 1 to 10. He said:

In this narrative we have another evidence of the divinity of Christ. Seven loaves and a few fishes; and He, by His almighty power, so increased the material of these loaves and fishes that four thousand people partook of them and were filled. Happy must have been those, who, moved by the grace of God, were able to follow Him and hear His teachings. His words were the words of God, and and His example was in accordance with the truth He taught them. While He preached mercy and came to mankind on an errand of mercy, He was pleased to exercise His mercy on this occasion in favor of those who came to hear the words from His lips. There is here an evidence of His divine compassion and of the interest He took in those who came to hear him. True happiness consists in being at peace with God. If we would enjoy peace, we must live in accordance with the truth of God, and obedience to His holy will. Apart from the truth and apart from that obedience, there can be no true peace, because we would be resisting Him. Now, the Son of God came from heaven to establish this peace between His offended Father and those who had offended Him, and in order that this peace may be enjoyed we must have liberty. We must not be in bondage. And what is to make us free? “The truth shall make you free.” Beside, the observance of God’s holy commandments in a particular manner. And how are we to have a knowledge of the truth? By the means provided by Himself. No man can or ought to presume to say by what means we may obtain a knowledge of the truth of God. That is for Himself to decide; and if he has told us how, then it is our duty to accept the regulation made by Himself; and so we may be sure, so far as the truth of God is concerned, to enjoy peace. Without this we shall be as wandering stars. We cannot enjoy liberty unless we live in accordance with the truth. How are we to obtain a knowledge of the truth? By the means established by Himself, appointed by His infinite wisdom; from those to whom He gave the word He brought from heaven and who received it; to these He gave authority to preach it, assuring them that He would be with them until the consummation of the world, and that the gates of hell should not prevail against His church. And how would it be if those whom He taught should say to Him: “You do not know the way the truth should be communicated to mankind!” And yet there are those who pretend to be wiser than HImself and than those whom He appointed to preach His word. Men put themselves forward as more competent to teach the truth than Jesus Christ Himself, or than those whom He appointed to teach the truth. The church of God has had, indeed, to encounter opposition, from the beginning until now. But no man ever resisted God and had peace. We cannot expect to have peace with God if our way be not in conformity with His will; and His will is given in the Holy Commandments. Then we can enjoy the true liberty of the church of God by acknowledging our submission to Him, to His supreme authority, and that He is only Lord and sovereign God. But inasmuch as He has been pleased to declare that the possession of peace and obedience to His will depends upon Him, as the truth does, so in order that we may able to do His holy will we must have the grace of God. That is the free gift of His. He has the right to prescribe the conditions by which we can obtain grace. The means prescribed by Him are very simple; for He knows best by what means we may be able to attain from Him the gace we need in order to comply with His Holy Commandments, and to enjoy peace and happiness.  Prayer is one of the means set forth by the Son of God Himself. He declares that if we ask the Father for anything in His name it will be given to us. God formed us a holy union between His Son and the church. The church is His body. And so far as the truth is concerned and all that is prescribed by Him for the means of obtaining grace, He had left that to His church. It is, indeed, as if we were of that multitude of four thousand; as if we were hearing from His own lips the words which He brought from heaven. If we continue to hear Jesus Christ, so it will be with us; we shall not be wanting in anything necessary for the attainment of that happiness which He can secure for us. It is true we may have to suffer hunger and thirst and persecution, but we have the consolation to know that in the midst of it we are before Jesus Christ and and to be strengthened by Him; that He will be with us to the end of time, affording us consolation for all that we have to suffer in His service. Our duty then is to be obedient to His Holy Commandments, and whatever it may be we are to suffer, we are all in His hands and our duty is to be submissive to His all wise providence. If men fall away from the faith and fail in securing the grace that is for all of us, the fault is their own. So let us be obedient to His Holy Commandments and then we shall, even here, enjoy the peace of God which is promised to us.

(*The above drawing of Bishop Loughlin is by Pat McNamara.) 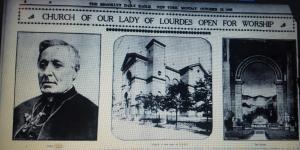