How Should Christians Respond to the Demise of Donald Trump?

How Should Christians Respond to the Demise of Donald Trump? June 10, 2017 Morgan Guyton

How should Christians respond to Donald Trump’s meltdown? My first instinct is schadenfreude. Because 81% of my fellow white evangelicals voted for him. And that means if he goes down in flames, then maybe they’ll finally lose their power and their ability to alienate millions of non-Christians from ever considering Christ.

But if I’m honest, Donald Trump’s behavior is the public repudiation and total exposure of my own sin. Every time he tweets impulsively, every time he lies, every time he revels in his own grandiosity, he is doing things that I have done and continue to do. So if I respond to Donald Trump’s demise like a Christian, it would be with my own repentance.

It’s easy to look down on Donald Trump and put ourselves above him. In fact, it feels really good to do so. Probably about as good as it felt in the nineties to gossip about the latest Clinton scandal. Delighting in scandal is literally diabolical according to the word’s Greek etymology. Creating scandal is basically the verb form of the word devil in Greek.

1 Corinthians 13:6 says, “Love does not delight in evil, but rejoices with the truth.” That is my standard for understanding how I should engage in prophetic witness in our public sphere. And it’s a very fine line. What is the difference between rejoicing when the truth is exposed and delighting in scandal? Many times, I have thought I was rejoicing with the truth when I was actually delighting in evil.

The way that I’ve understood my vocation to detoxify Christianity was shaped largely by a decisive moment I experienced in college. Growing up as a moderate evangelical in the midst of the fundamentalist takeover of the Southern Baptist Convention in the 1980’s, I basically believed everything the fundamentalists believed, but with tremendous ambivalence and reluctance. I always presumed the fundamentalists were right and I was just a rebel because I couldn’t refute their arguments but I couldn’t accept them either.

I had a fundamentalist housemate in college who was one of the sweetest guys I’ve ever known, but he read thick, scary-looking books by authors with fundamentalist-sounding names like J.I. Packer, R.C. Sproul, and Charles Spurgeon. When he had a nervous breakdown and ran away from school, that was the moment when fundamentalism lost its power over me. I said this can’t be right since reading those thick, scary-looking books makes people lose their minds (this was about a year before I lost my mind and spent the weekend in the psych ward).

So I’ve always had this sense that if I can just expose the toxicity of fundamentalism, then all the moderate evangelicals who are quietly languishing in fundamentalist megachurches will wake up and walk out into their freedom like I once did. And I think there’s some validity in that. For the past five years, I’ve been praying a simple prayer over and over again: “Make every fruit plain, Lord.” Since Jesus says every tree is known by its fruit (Luke 6:44), I’ve always thought that rotten fruit is the one most powerful counterargument to the biblically irrefutable, logical citadels that fundamentalists build.

I still believe that the revelation of truth that exposes and discredits sin is a cause for rejoicing. The systems of oppression that the Bible calls “the world” are held in place by hiding the truth. Any form of human power over others always depends on the manipulation and suppression of truth. The power of Christ emerges through the exposure of truth, the ultimate example of this being his cross where imperial terror completely lost its power through divine martyrdom (Colossians 2:15). Jesus created an army of people who were unafraid to die and who saw their martyrdom as a spiritual goal because they had given themselves to the truth of his cross. The most brutal, totalitarian empire cannot withstand that kind of power.

So what is the difference between the truth that liberates through the exposure of sin and the delight in scandal that makes people toxic? I’m not sure that I can draw the line adequately other than to say that truth always involves my own sin being exposed and crucified while scandal involves my self-justification through the denigration of someone else. Too often, I have preferred scandal to truth.

I remain committed to speaking truth in solidarity with marginalized people. That’s a call that God put on my life many years ago. I cannot take the “higher ground” of some kind of “third way” in which I pretend to “rise above” the political realities that make a mockery of Jesus’ name. But I don’t think that exploiting Trump’s scandals in order to discredit evangelicalism meets the standard for prophetic witness set by 1 Corinthians 13:6. Much better to focus on talking about real justice issues out of love for those who are impacted.

The best Christian response to Donald Trump is repentance. Everything he does is something I have done. I just live in a very different context with much less ability to cause harm. Thankfully, I have had many wise teachers who have called me to repentance throughout my life. And Jesus gave me a cross where I can leave my sins. Repentance is our way of life; it is the source of every Christian’s freedom and power.

Please help us reach our goal of recruiting 100 monthly patrons for our campus ministry NOLA Wesley by the end of the summer! 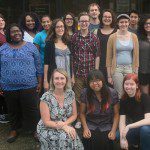 June 7, 2017
Why NOLA Wesley Believes In Inclusivity
Next Post 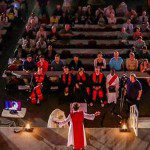 June 12, 2017 When Bishop Harvey flipped the script on bold imagination
Recent Comments
0 | Leave a Comment
Browse Our Archives
get the latest from
Mercy Not Sacrifice
Sign up for our newsletter
POPULAR AT PATHEOS Progressive Christian
1