Well it’s time again to share the top blog posts over the past year. I’m going to leave out the ones that viralized because they were trashy click-bait. Before you read further, I need to give one last plug for our ministry fundraiser that ends tonight. I’ve said before that this blog is only possible because of my ministry context in an inclusive campus ministry where I am free to be completely myself. If my campus ministry runs out of money, I will need to take down my blog since it would create problems at the churches where I’m likely to be assigned. If you want the blog to continue, please consider helping our campus ministry reach our fundraising goal by the time the ball drops tonight.

1. What Would the Israelite prophet Isaiah Say About Trump’s Jerusalem Decree?

This blog post is about Isaiah 2, which is Isaiah’s beautiful vision that Zion is supposed to be a place where all the nations receive wisdom and gather for prayer. The Israelite prophets would never see Jerusalem as anything but an international holy city. For some reason, this blog post went viral in Nigeria without actually accruing a lot of social media shares.

This blog post’s popularity was mostly due to hate-sharing from the alt-right. The alt-right has been engaged in a very clever national campaign around the slogan “It’s okay to be white,” which seeks to frame racial politics as an abstract question of identity rather than say the rights of black people not to get killed by police. I tried to engage the question thoughtfully, saying that of course it’s okay to be white and what’s not okay is how white anxiety causes many un-self-aware white people to harm people of color. The alt-right trolls in my comment section used the fact that I had written a blog post as proof that I had “fallen for their trap” or something.

This year has been an apocalypse (in the biblical sense) of sexual violence in our culture. In particular, it has exposed the degree to which patriarchal taboo-based sexuality has utterly failed to keep people safe. I continue to seek a Christian sexual ethics that is holy and just and not a patriarchal gender binary taboo system.

This piece calls out the irony of NT Wright trying to critique transgender identity as being out of touch with physical reality from the perspective of Augustinian disembodied, Platonist, and yes, Gnostic sexuality.

5. How Did Defenders of Absolute Truth Become Post-Truth Ideologues?

Growing up evangelical, I was indoctrinated with the understanding that we were people who believed in absolute truth while liberals lived in a relativistic universe. The age of Trump has exposed the postmodern ideological tribalism of the “absolute truth” defenders. When a subculture defines truth as authoritative proclamation over against empirical reality, that subculture has entered a post-truth reality.

I identify myself as a progressive evangelical. That means that I’m unlike many progressive Christians in that I believe in the importance of orthodoxy, Jesus’ sacrificial atonement, the traditional Trinity, ascetic discipline, and other evangelical ideas and practices.

7. Why Toxic Christianity is a Threat to the Planet’s Survival

The reason many white evangelical Christians are anti-environmentalist is because they interpret environmentalism as an innately secular threat to God’s sovereignty. To concede that humans can render the planet uninhabitable through our pollution means admitting that God is not completely in charge of every aspect of reality.

This was a follow-up on my post about how “absolute truth” defenders become post-truth ideologues because they define truth as authoritative proclamation and nihilistically discredit the possibility of empirical fact. The five alternative facts of toxic Christianity are: 1) that human nature is thoroughly wicked and utterly untrustworthy, 2) that God is in meticulous control of every aspect of the universe, 3) that the most important question is where you go after you die, 4) that justice is strictly punitive, and 5) that God’s highest priority is enforcing gender norms.

9. What If This Is The New Church?

This was a post reflecting on the way that faith-based leaders played a big role in standing up to the racists in Charlottesville. Jesus calls us to take up our cross and follow him. I believe the most concrete way in which we can obey his command is to get physically in the street in solidarity with marginalized people.

My recovery journey of the last year and a half has had a tremendous influence on my theology. Here are the seven lessons I discuss in this post: 1) Everywhere is hell without serenity, 2) Grace and truth require each other, 3) Perfect freedom is perfect surrender to God’s will, 4) We cannot find God without a community, 5) Certainty and control are the opposite of serenity, 6) Head knowledge is only useful insofar as it supports a change of heart, 7) Salvation is one path with many variations. Naturally the evangelicals were mad about #7, but it’s pretty well impossible to witness God’s miraculous work in the lives of recovering addicts who don’t profess orthodox Christianity and confidently hold the view that they cannot possibly be saved.

Please support our campus ministry through a one-time gift or monthly patronage! 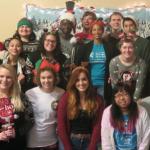