Miss the Point of Jesus’ Baptism?

Miss the cultural cues, and you’ll likely disengage from the Gospel story of Jesus’ Baptism.

Scripture is “high context” literature. American Bible readers are low context readers. This makes us miss the point of what the Scriptures are actually saying. Crucial details pass by in our reading never picked up on by us because we can’t see them. This is because our “low context” culture bombards us with documents where all details are provided and all gaps are filled. We assume nothing pivotal is left unsaid, and everything necessary is explained.

Since many 21st-century Western readers miss the point so often in the Gospels, we ought to ask some questions. Like, what do we miss concerning this Sunday’s Gospel of Mark 1:7-11, the story of Jesus’ baptism? That’s what this blogpost will delve into.

But before diving in, I invite you to watch this video presentation on John the Baptist, Jesus’ Baptism, and how Americans muck up Gospel readings with the wrong cultural ideas:

Mark 1:7
John the Baptist proclaimed:
“One mightier than I is coming after me
I am not worthy to stoop and loosen the thongs of his sandals.”

Mark 1:1-15, from which our Sunday Gospel comes, is the prologue to the Gospel called “Mark.” Note that, unlike “Matthew” and “Luke,” “Mark” lacks an infancy story. Not only that but also unlike these other two Synoptic Gospels, a genealogy for Jesus is also missing. Why? Wasn’t “Mark” aware of these?

Perhaps these embellishments hadn’t been invented yet?

We Miss the Mediterranean Perspective

But “Mark” is making a proclamation (euangelion or “gospel” in 1:1) of good news for the people. But American Christians miss things any Mediterranean reader of “Mark” would make of his proclamation. For example: By what authority does he do this? Who gave him the authority to proclaim such things?

To proclaim Jesus as the messiah demands that Jesus had sufficient public authority for this role. From where was such public authority derived? According to the Mediterranean perspective, it came from your family’s honor rating, really your father’s standing within the community. So it really is a big deal that “Mark” fails to give Jesus genealogy, that is to say, a typical patrilineal honor-rating.

Belongingness, or ingroup-centeredness, is everything in the Mediterranean world of Jesus. American Bible readers miss this. In extreme contrast, group-orientation to us, no matter how valued it is, almost always gets subordinated to individualism.

We Miss the Significance of “Son of God”

Nevertheless, right off the bat, “Mark” does give Jesus an extraordinary honor-rating.

Mark 1:1
The beginning of the Gospel of Jesus Christ [the Son of God].

Wow! What an honor-rating that is! In the Markan context, “son of God” means a holy man, which anthropologists call a “shaman.” The God of Israel associates with and authorizes peasant Jesus as his own broker. God is Jesus’ special patron, a father to him. Since honor is derived from your father in this Mediterranean society, “Mark” establishes an outrageously high honor-rating for Jesus immediately in his text.

We Miss the Urgency of Mark

American Christians miss why the anonymous author we call “Mark” felt the urgent need to do this. It’s because of his Mediterranean readers and their shared cultural predilection for honor. No one will bother with his Gospel about a nothing-person (Jesus) from a nothing-place (Nazareth, Galilee) unless “Mark” opens by canceling any objections in the opening. But calling Jesus the “son of God,” the evangelist “Mark” establishes a sure foundation for Jesus’ authority in the story that follows.

And continually throughout his Gospel, “Mark” reminds his readers of this. Thus, several other-than-human persons exclaim that Jesus is the “holy one of God” (Mark 1:24), the “son of God” (Mark 3:11), and the “son of the Most High God” (Mark 5:27). None of these are proclamations of later-evolved Nicene (325 CE) or Chalcedonian (451 CE) Christologies, mind you.

We Miss the Embarrassment

The historical John the Baptist, until his arrest, was probably Jesus’ teacher and master. In this world, the greater always leads and informs the lesser, and students cannot be greater than their teacher, nor can followers be held in higher regard than the leader. This cultural truth embarrasses “Mark.” While he won’t vilify the other hero John, he must lower him so as not to support a rivalry in the minds of readers between two Israelite heroes.

“Mark” carefully does this. He crafts culturally-plausible dialogue into John’s mouth, claiming abject unworthiness (Mark 1:7). Another thing missing from American Gospel readers’ understanding is that sayings found in the Gospels need not correspond to something factually said by the historical person presented. But that’s fine! Galilean peasant Mary lived her Magnificat (Luke 1:46-55) even if she never actually spoke those words “Luke” places in her mouth. The same applies to John the Baptist in “Mark.”

In the 20s CE, Jesus probably appeared quite inferior to John the Baptist. Later, Gospel writers had to grapple with this. Writing around 70 CE, authors like “Mark” basked in the Easter-light of the Risen Jesus, benefitted from an after-the-fact perspective. Hence, they wrote accordingly.

We Miss the Shame of Jesus’ Origins

“Mark” knows his audience won’t miss the shamefulness of the historical Jesus’ actions. Jesus historically left Nazareth, his ingroup-self, to go join with John and his movement. Although those from a geographically-mobile American perspective miss it, to do that seemed pretty shameful to Mediterranean readers.

Jesus had questionable parentage. In “Mark,” Jesus is identified strangely as “the son of Mary.” That’s an insulting way of saying, “we aren’t sure who his father is.” This is a world where blood tests and DNA are missing, folks. Who is the actual father of any child in the Bible? Biblically speaking, only the male who acknowledges publicly a baby as his own turns a child into his daughter or son.

We Miss our Christmas Devotions!

When reading Mark 1, put all your Christmas decorations away. Put away the Nativity scene, Joseph, and any angels. “Mark,” the earliest narrative Gospel, is oblivious to any of that, so it cannot provide them to us. Folks, many considered Jesus to be a bastard. Ultimately, the sacred author wrote mindful of this scandal.

Mark 1:10-11
On coming up out of the water he saw the sky-vaults being torn open and the Spirit, like a dove, descending upon him. And a voice came from the sky-vaults, “You are my beloved Son; with you I am well pleased.”

Throughout “Mark,” repeatedly the spirit world identifies Jesus as “son of God” or “holy man.” At his baptism, the Divine Voice confirms this for Jesus and John. From Genesis to Revelation, God’s preferred means of communicating to creatures is Altered States of Consciousness experiences.

For ancient Mediterranean readers of “Mark” who considered honor to be everything, a peasant day laborer and artisan from a tiny hamlet could never legitimately be imagined as a great public hero (Mark 6:2-3). But who would dare contest the patron God’s own chosen one, his own son? God’s Word seals the deal.

So much is missing when American Christians read this Gospel story. Ours is not a culture that regularly engages in communicating spirits from Alternate Reality. We tend to block out ASC experiences, except when sleeping or under the influence of a controlled substance. Therefore much of this Sunday’s Gospel story simply doesn’t engage us.

But for our Mediterranean ancestors in the faith, it was a critically important opener to the First Gospel. 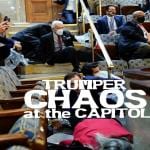 January 6, 2021
Cussing and Prayer: Trumper Chaos at the Capitol
Next Post 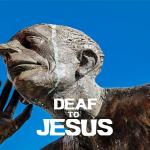 January 12, 2021 Deaf to Jesus
Recent Comments
0 | Leave a Comment
"No"
Ame Apocalypse & 666: What Does this ..."
"That's right. We can never be certain so let's not try. /s"
Raymond Timothy and Titus Are Forgeries, and ..."
"That's right. Context doesnt matter. Knowing anything about the history and background of Scripture just ..."
Raymond Timothy and Titus Are Forgeries, and ..."
"If you have time please take a look at this.Obama lottery 666 you have got ..."
geirsmith Apocalypse & 666: What Does this ..."
Browse Our Archives
Related posts from Messy Inspirations