Politics in the Pulpit? Yes and No

Politics in the Pulpit? Yes and No November 3, 2014 Greg Forster

Growing numbers of Americans want pastors to talk about politics. A generation ago, we learned the hard way that when churches take sides in partisan and ideological disputes, the result is disaster. But there is a legitimate reason public demand for political theology is rising, and there are ways to meet that need without having pastors endorse candidates.

The Pew Foundation reports that the number of Americans who want pastors to talk about politics has risen to 49%, rising six points in the last four years. A full 32% want pastors to endorse specific candidates. It’s not clear how many of them are aware that churches are (rightly) forbidden to do this as long as they are tax-exempt entities.

There are a lot of reasons for churches to be wary of getting involved in elections and public policy. It discredits the gospel; 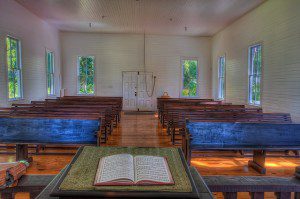 when the stewards of the gospel message advocate political programs, people naturally get the idea that the gospel message is a political program. Pastors often compromise moral standards in order to forge alliances with the least-imperfect of the very imperfect candidates available. And it prevents the church from being the “church universal,” the place where everyone meets on equal terms.

We saw all these lessons in the debacle of the Religious Right movement. However, that was not just a one-time event. Throughout the last century, American churches became the dupes of cynical politicians time and again. Richard Nixon was caught on the Watergate tapes discussing how to manipulate evangelicals, saying things like “you have to give the nuts 20% of what they want.” Billy Graham, who had done a great deal for Nixon, wept when he heard those tapes.

Does that mean churches should steer clear of anything political? Actually, it depends on what you mean by “political.”

The hunger for churches to speak into politics is perennial for a good reason. Every area of life needs a moral purpose and clear ethical boundaries, and no area of life needs it more desperately than this one. Where no one is casting a profound vision for the transcendent meaning and purpose of an activity, that activity quickly descends into shallow narcissism and brutal exploitation. And because politics involves the use of coercive power, it descends into brutality more quickly than most activities.

For the last century, we’ve been caught in a vicious circle. Churches keep getting drawn into politics because people are desperate for a moral vision that can humanize politics and point it toward its proper end: justice. Then, churches take sides in elections and ideological disputes, resulting in disaster. So churches withdraw from politics, and the cycle begins anew.

I think we might break out of this cycle if we rethink what we mean by “politics.” This word comes from the Greek polis, which simply means “city” – that is, the civil community. The deepest level of politics concerns the way the public business of the civil community is structured. As the editors of the journal First Things once put it, politics in the profoundest sense is “free persons deliberating the question, How ought we to order our life together?”

The “politics” that really count in America is not who wins the election. It’s whether we will remain a nation dedicated to what have been our central political commitments: religious freedom, constitutional democracy, the rule of law, recognition of the household as the central social building block, equal dignity for women, an entrepreneurial economy based on opportunity and hard work, and a special concern to extend opportunity to the poor and the marginalized. Are these commitments just? Do we even remember what they mean? Those are the real political questions of our day.

If you think these commitments are just platitudes – so obviously right that they can be taken for granted and don’t need strong champions to speak out for them – you aren’t paying attention. I don’t think we need pastors to pick candidates or debate the tax rate. I do think we need pastors to remind us that the purpose of politics is justice, and to remind us of what justice requires.

This is exactly what the pastor is supposed to be doing anyway: helping people interpret the meaning of their lives and understand what God requires of them in all areas of life. Human beings are political creatures, and a gospel that has nothing to say about politics (in the sense of the polis) is a gospel that doesn’t renew the whole human person for Christ. If pastors learned to preach about public justice effectively, there would be more public justice – and, therefore, less demand for pastors to pick candidates.

Greg Forster  has participated in previous Public Squares on capitalism and religious trends.

Images: Kern Family Foundation and Matthew Pearson, “From the Pulpit.”

November 4, 2014 A little late for All Saints' Day, but....
Recent Comments
0 | Leave a Comment
Browse Our Archives
get the latest from
MISSION:WORK
Sign up for our newsletter
POPULAR AT PATHEOS Faith and Work
1